Hard-leaved Monkey Plum is neither persimmon, nor ebony, nor for that matter Bladdernut 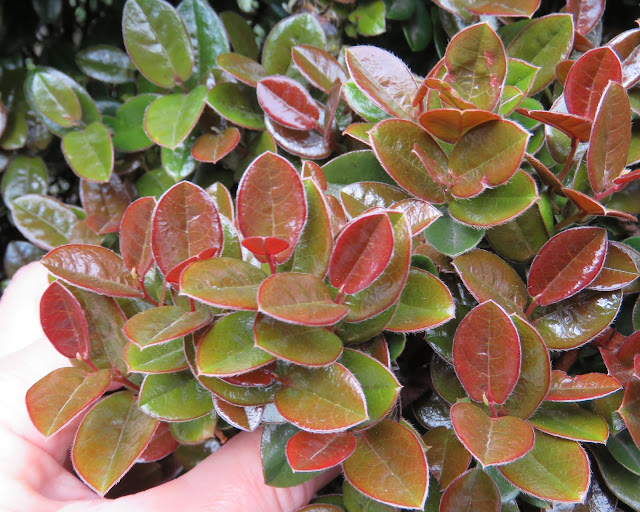 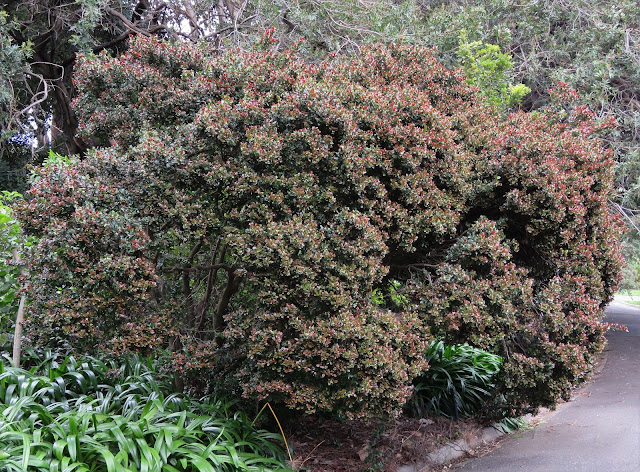 I kept seeing this shrub around Melbourne suburbs, with box-like foliage but clearly something different. In late winter it stands out with its glossy, red new leaves and, if you look closely, small white flowers a bit like a persimmon. 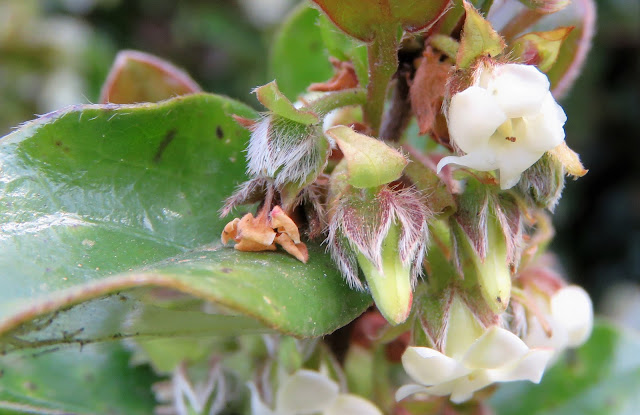 It is definitely a Diospyros, the rather large genus that also includes persimmon and ebony. There is good information on the web about the two most likely species: Hard-leaved Monkey Plum, Diospyros scabrida var. cordata and Bladdernut, Diospyros whyteana. Both are from Africa, the first from eastern Cape to Natal Province in South Africa, the other from eastern Cape through to Ethiopia.

But the detail of how these two species differ is a harder to track down (you can find a bit about what makes the Bladdernut distinctive but not what the Hard-leaved Monkey Plum has instead). So I browsed through our botanical library collection and found in the Flora of Southern Africa (volume 26, 1963) an account of the family Ebenaceae account by Bernard de Winter. 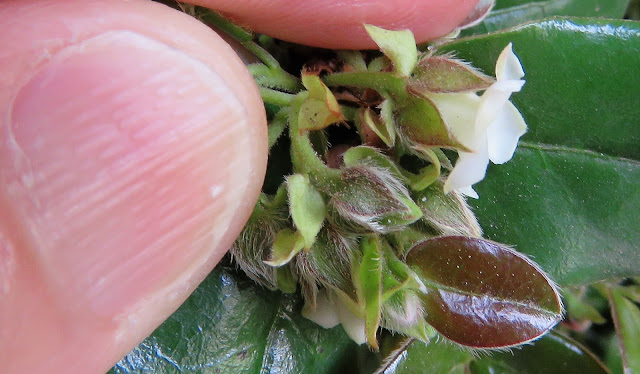 From that I gather the outer layer of the Bladdernut flower - the calyx - is urn-shaped in flower and becoming bladder-like in fruit. There are five short teeth on the rim of that urn, or bladder. The flowers of the Hard-leaved Monkey Plum, on the other hand, have calyces (plural for calyx) that are split to the base and tapered in flower. As you see in these pictures.

We have both species recorded on our living collections database for Melbourne Gardens, so I set off into to check on these differences for myself. The two best placed and well labelled specimens of both species were along the Anderson Street path, so that's where I started.

Which turned out to be a mistake. I'd read online and in that Flora that the two species look similar in leaf, but easily separated in flower or fruit. The three specimens I chose for comparison looked pretty much the same to me. If I squinted a little and selected the most unusual flower in each case I could perhaps find some differences. but hardly 'easily separated'. 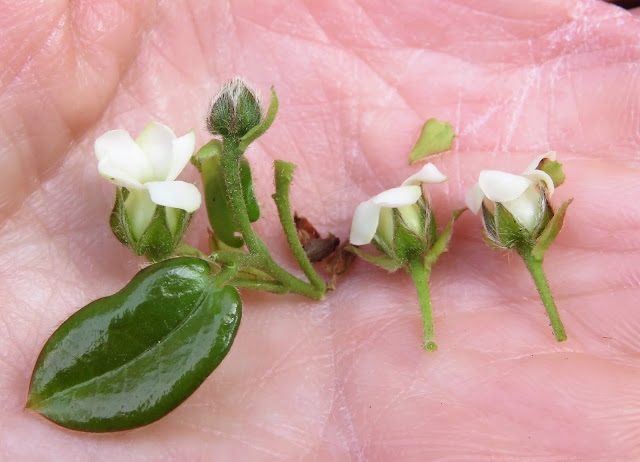 I searched further afield. We have about five labelled as Bladdernut (well, with the correct botanical name) and a dozen or so Hard-leaved Monkey Plums. The two Anderson Street specimens, and the next couple I checked, seemed more Monkey Plum than Bladdernut.

And so it turned out. When I eventually located a large, older specimen of the Bladdernut (see end of this post for pictures) it had entirely different flowers. They were mostly in bud, so with a different flowering time, and there were some old succulent berries on the bush. the calyx was urn-shaped in flower and although not obviously resembling a bladder in fruit, quite different that of the Hard-leaved Monkey Plum fruit, which I chanced up in one of the misidentified specimens. Unlike those of the bladdernut those calyces were peeled right back, much like a persimmon. 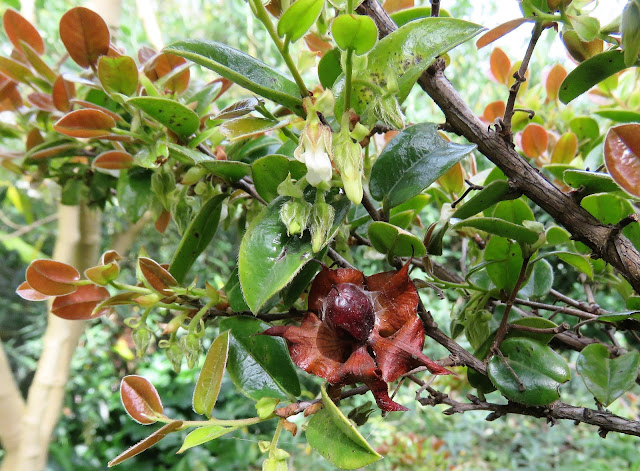 Indeed, as you'll see at the end of the post, the leaves of the Bladdernut looked quite different to those of the Hard-leaved Monkey Plum (see top of post) as well - and none of that shiny, red new foliage.

I also found on one of the misidentified Hard-leaved Monkey Plums some old fruits. So it seems we have a couple of misidentified and mislabelled Diosporus in the collection, which can happen. I've sent through a request to have them checked and we'll see if my cursory observations are on the money or not. That is, we only have a two or three true Bladdernuts.

Given I've taken you this far down this taxonomic burrow, there are two varieties of the hard-leaved Monkey Plum, Diospyros scabrida. One has larger leaves and evenly hairy bracts around the flowers. The other has leaves mostly less than three centimetres long (sometimes up to four), and scattered hairs on those bracts. The variety most commonly grown and indeed labelled as such in our collection, is the latter one, called Diospyros scabrida var. cordata. That seems right to me.

As to that very Greek sounding genus name, it means 'celestial pear'. Which would be a great name for a psych band but doesn't apply so well to these South African species. They have, apparently, a 'pleasant enough taste' but are not 'delicious'. Not like the persimmon.

To summarise, all the preceding pictures are of the Hard-leaved Monkey Plum and the next few are of what I think is true Bladdernut. Phew. 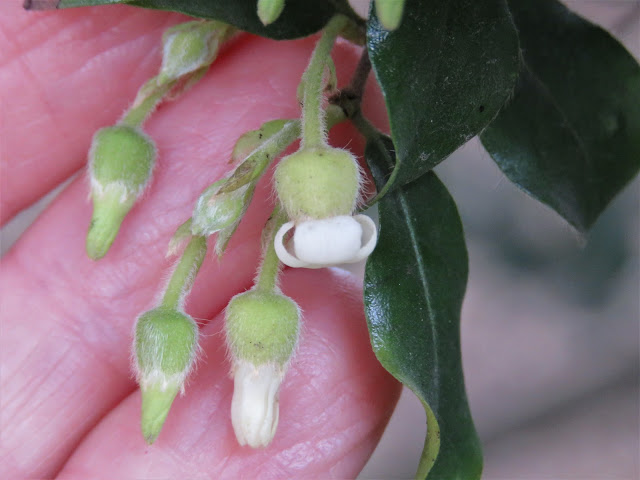 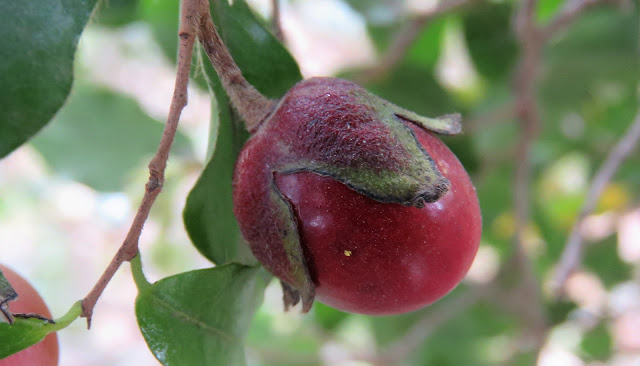 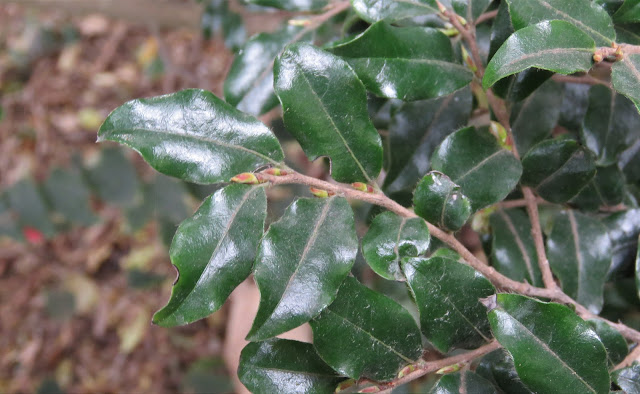