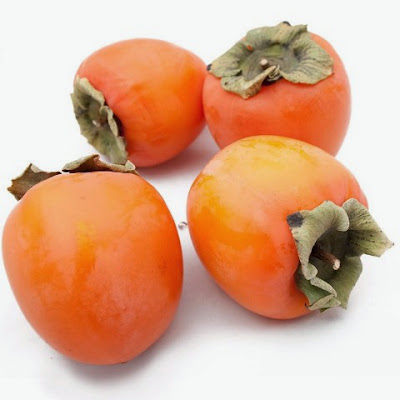 A few years ago Jane Edmudson on the ABC’s Gardening Australia described some persimmons as suitable for eating like an apple. Others, she said, are almost inedible due to their astringency. There are some 1000 cultivars so you have plenty to choose from.

As you’d expect if you read my recent post about how the Globe Artichoke can change our sensation of sweetness, it’s the phenolics in persimmons that pucker your mouth. In this case, mostly tannins.

Apart from causing mouth puckering, the tannins in the fruit of Diospyros kaki, the persimmon, can be used for waterproofing, food preservation and dyeing. The fruit and leaves also have some potential medicinal uses, currently under investigation: I gather you might already find persimmon extract in 'athlete's foot socks and soap'.

As I discovered in my local park, where a single persimmon tree has been placed among a collection of other edible-fruit trees, the flowers are either male or female. Although on the same plant in this specimen, they can sometimes male on one plant and female on another. 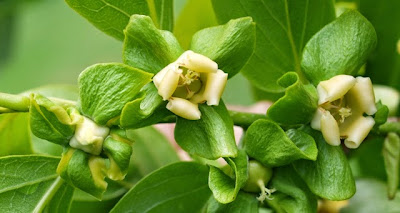 The females (above) have the green, leathery, almost-Elizabethan collar that ends up ornamenting the fruit (see top of post). The male flowers (below) are pretty insignificant in comparison, and look like they might just be spent blooms. 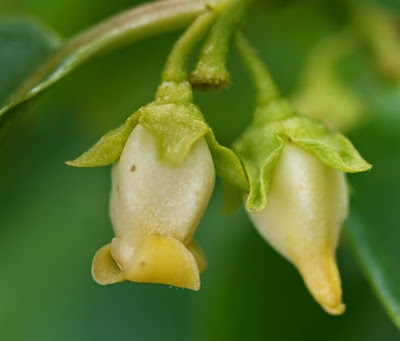 Varieties that produce fruit without seed don’t need to be pollinated, but fully loaded fruits need male flowers in the vicinity. In US orchards farmers grow trees in a ratio of eight female to one male, although I did read that trees can change their sexual orientation from year to year, which if true would make this tricky!

So I tracked down some authoritative advice from the University of California in Davis (USA) on, as they put it, 'what makes a persimmon a boy or a girl'...

One in 20 plant species have flowers on a single sex. It's a great way to mix up genes during pollination, making sure flowers don't pollinate themselves or, if the flowers are on separate plants, don't pollinate with flowers on the same plant. There are other ways to stop this happening, but dioecy, as it's called when single-sexed flowers are on separate plants, is a good way.

The scientists at University of California say persimon plants are either male or female, which makes my parkland plant a little odd. My plant would be described as monoecious meaning that while it has single-sex flowers (either male or female) these are born on the same plant. A dioecious plants has only male, or only female, flowers.

This I remember from Botany 101, or whatever we called it, although the terminology gets a little confusing when transferred to algae, where I drifted later in my studies...

So this, my parkland plant, is monoecious and my American university colleagues say persimons are dioecious? I needed to read more closely... These guys were working on a different species of persimmon, Diospyros lotus, sometimes called the Date Persimmon or Lilac Persimmon. It has smaller fruits and, it seems, a slightly different sex life.

The researchers were looking for the gene that coded for maleness or femaleness. That is, what makes it a boy or a girl persimmon? They found a gene system they call OGI-MeGI: ogi is Japanese for male tree, megi for a female tree. Their next task is to see if this kind of system is universal in all plants, and to see if they can introduce dioecy into the 95% of plants that don't have unisexual flowers on separate plants to help with breeding and plant health.

Meanwhile, back in the park, I'm going to have to track this plant to see if it keeps producing flowers of both sex (monoecious) or switches to only one sex (dioecious). I'll get back to you in a few years, perhaps.

Images: The flowers and young tree are from the park near where I live, photographed in December 2014, and the fruit from a Grow Organic website.
Email Post
Reactions:

Pakistani Call Girls in Bur Dubai are forth the attention of the customers by their wonderful service at very affordable Price. Therefore, most of the People are selecting the best and affordable Girls as per their need and preference. Most often, you can take the Bur Dubai independent escort to the Hotel and offer the foods and cool drinks as per their wish

KAJOL ROY said…
real is top choice to rent because handiest actual call girls can love you as your GF & make you satisfied. So if you want proper fun with hottest Escorts in Bangalore, then just connect to our Society.
Contact me 08123770473, 8147349718 gipi.org.in

KAJOL ROY said…
real is top choice to rent Bangalore Escortsbecause handiest actual call girls can love you as your GF & make you satisfied. So if you want proper fun with hottest Escorts in Bangalore, then just connect to our Society.
Contact me 08123770473, 8147349718 gipi.org.in

Tripti said…
This post is very useful for me. Thanks for sharing

Unknown said…
Companion on-line dating services have actually gotten a great deal of appeal online at this present moment. Nowadays, more and more songs are heading out every weekend break to discover attractive independent girls in Delhi. They want a person with which they can go with a rendezvous Delhi Girls
3:28 pm, September 27, 2018

Unknown said…
Girls in South Delhi are well-renowned across India for their open mind and also stylish personality. Friendly, well-read and also fashionable, the South Delhi ladies are the ideal business for your leisure time, at your certain event Delhi Escort
5:57 pm, September 27, 2018

Devayani Ahuja said…
This is very educational content and written well for a change. It's nice to see that some people still understand how to write a quality post.
Gurgaon Escorts Services
Escorts in Gurgaon
Call Girls in Mahipalpur
7:31 pm, October 29, 2018

Kurtkoy said…
We at Hotshaira sahgal also provide VIP and VVIP models and high profile female escorts from all over
the world.

Unknown said…
In this situation you might wonder how it might efficiently be used. But as soon as you do and take out it you'll automatically come to understand. The women who'd function you're always there accessible awaiting you.
Nainital escorts
Bareilly escorts
Haldwani escorts
RudraPur escorts
Ramnagar Call Girls
Bhimtal escorts
Dehradun escorts
Haridwar escorts
Rishikesh escorts
Mussorie escorts
5:36 pm, January 24, 2019

Unknown said…
If you truly need to go caressed then what could be more appealing than the aid of those escorts in Jaipur. Just employ an escort out of Jaipur Escort Service and prepare to get a challenging drive in the business of the magic beauties. All these gorgeous ladies won't just guarantee you sleepless evenings but may also provide you a few of the won't unforgettable moments on your lifetime.
Jaipur escorts
Escorts in Jaipur
Jaipur escorts service
Udaipur escorts
Jodhpur escorts
Ajmer escorts
jaisalmer escorts
Pushkar escorts
Kishangarh escorts
5:36 pm, January 24, 2019

Jiya Verma said…
You may also impart your fantasies and cravings since I wish to produce companions before the end of the time. I truly like to present my sensual service people who fully disturb from existence. Jaipur escorts never assists of the types of men.
Jaipur escorts
Jaipur Call Girls
5:45 pm, July 06, 2019

Unknown said…
HI Guys, This is Syed moula. I'm one of the best blackmagic solution provider in Bangalore, If you are looking for solutions to your problems in Bangalore then you have landed in correct place. If you have cheated with other blackmic solutions agency then all you need to do one thing, Just have service with us once and trust me you will get some amazing service with real solutions. NO CHEAT NO FRAUDS. You are just 1 call away from some amazing life time experience.