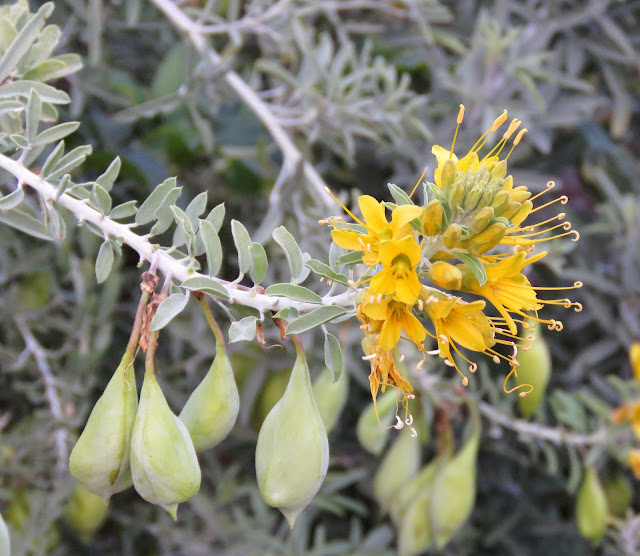 We've grown this floriferous and fructiferous shrub from California in our Elizabeth Murdoch Californian Garden, and now in the new Arid Garden. It flanks the path leading from Tecoma Pavilion into the main part of the garden and was in fully flower and fruit when these pictures were taken in mid-March.

The aptly named Bladderpod, or Peritoma arborea, grows in harsh coastal bluffs, roadsides and beside ephemeral desert creeks in mostly southern California and the northern tip of Mexico (Baja California).

An odd feature of the flower is the protruding ovary, seen in this series of photographs as it transforms into a small pod. Instead of resting within the flower, as is usually the case, the ovary has a stalk that unfolds then pushes its further away from the centre of the bloom. 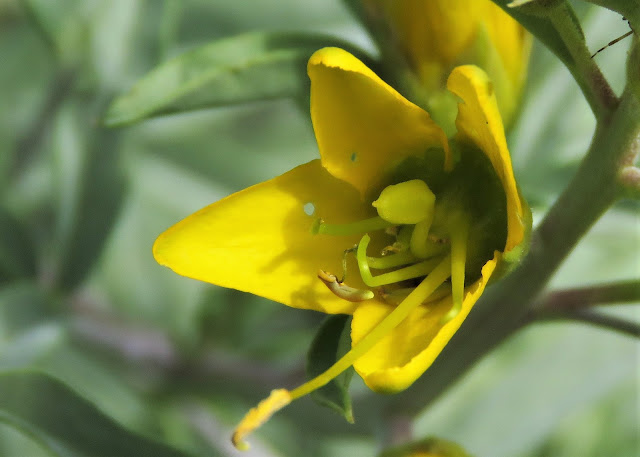 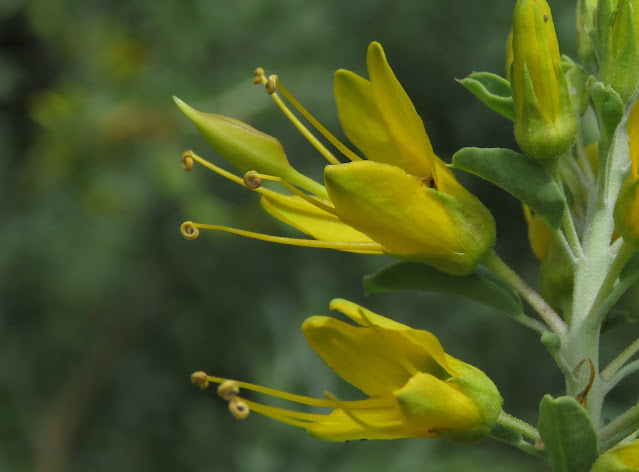 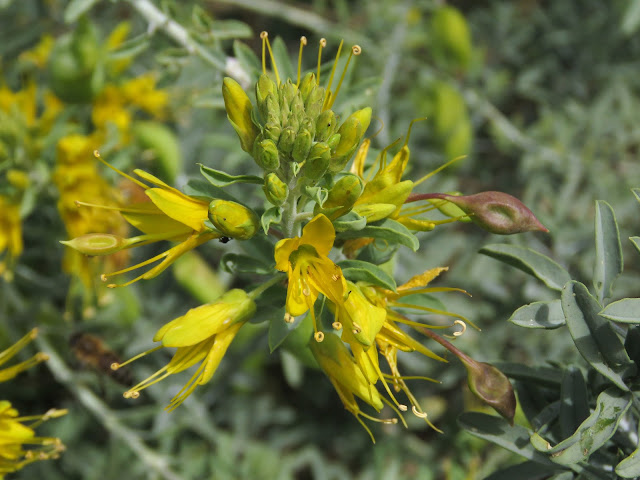 In many flowering plants, the style, usually an elongated, filament-like extension of the ovary topped by a receptive area for pollen (called a stigma), is often all that you see of the female parts of a flower.

But in this species, the style is very short. Instead, the elongating stalk extends the whole reproductive apparatus - ovary and all - to the edge of the petals.

In full fruit, that stalk extends even further and thickens up, adding extra length (the part beyond the rusty brown knot) to the stalk of the drooping pod. 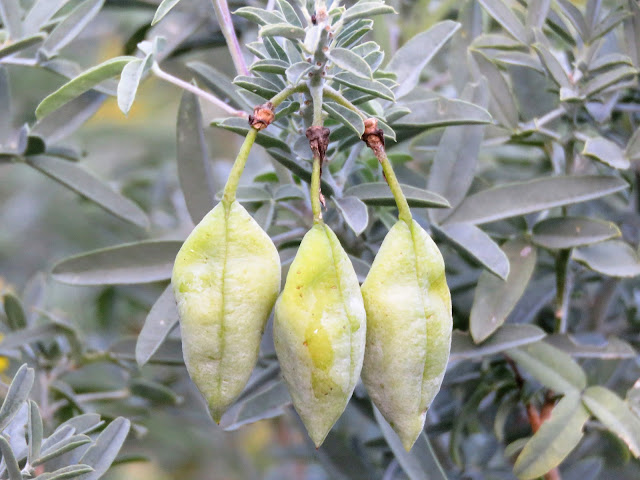 The pods might remind you of a legume, further supported perhaps by the leaves being divided in three, like many in the pea-family. 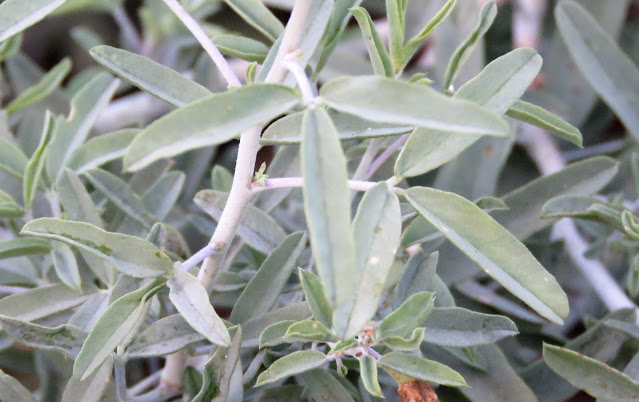 That's all misleading and Peritome is classified in the family Cleomaceae, close to the cabbage family. Brassicaceae. It used to be in the caper family, Capparaceae, but DNA comparisons showed us this genus and a few close relatives were what we call as 'sister group' to the Brassicaceae.

While they could have been popped into an enlarged cabbage family, they were distinct enough to be kept in their own family, called the Cleomaceae (based on Cleome, the so-called spider flowers or bee plants). 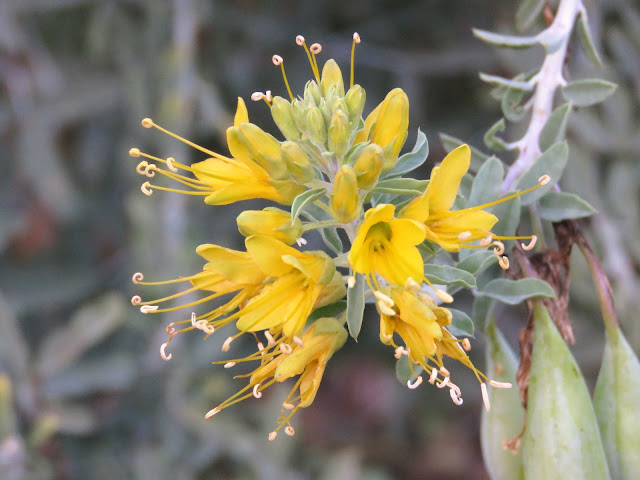 Peritoma has six species, all in North America, of which the Bladderpod is the only woody shrub (the others are short-lived, often annuals). Partly for its 'foul odour' when the leaves are crushed, a mechanism to deter grazing insects. For that reason it is recommended that plants be grown away from paths - ours are not within brushing distance.

Surprisingly, then, the pods are edible. They are picked 'carefully' to avoid the stinky leaves, boiled a few times (to remove bitterness) and then eaten separately or in a stew. 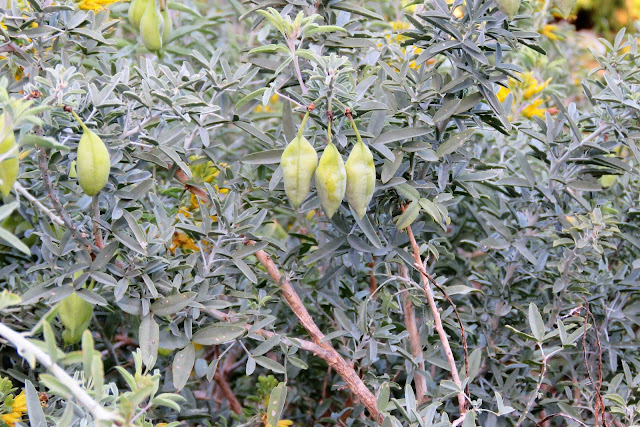 Three varieties are sometimes recognised based on the shape of the pods, but I don't have the inclination to bother with that. And neither does our Royal Botanic Gardens Victoria database.