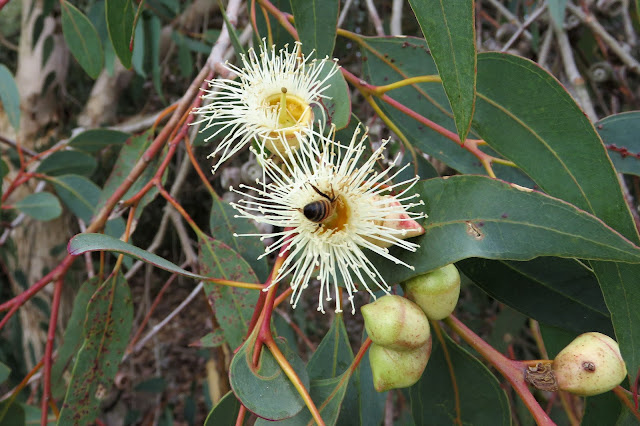 Three years before Ferdinand Muller - first Director and third 'head' of what we now call Royal Botanic Gardens Victoria - arrived in Melbourne, he collected the leaves, flowers and fruits of a gum tree in the Bugle Ranges, 40 kilometres south-east of Adelaide, in South Australia.

Mueller arrived in Adelaide by ship from Germany in late 1847, and was soon collecting plants as far as he could walk. Which for him, would the Bugle Ranges, a mere 40 kilometres out of town.

Although it may have been while Mueller lived there for a few months with his sister when he collected what he described in 1855 as Eucalyptus cosmophylla - the gum with 'decorative leaves'.  Mueller also proposed (and others described and named) two varieties, but these are no longer accepted as distinct. 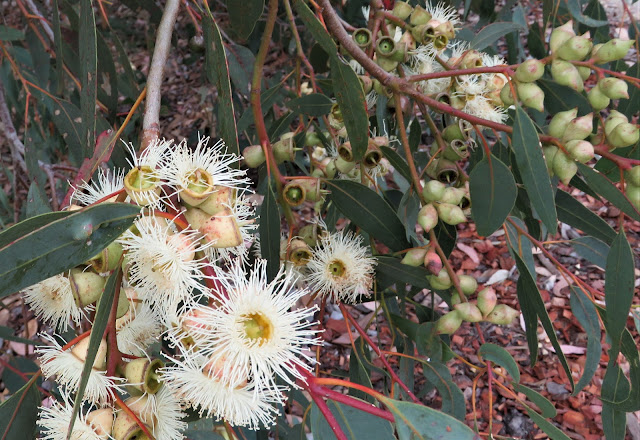 In the Flora of Australia account of Eucalyptus cosmophylla, it is described as a 'small tree suitable for street planting', as are many of the mallee and mallee-like eucalypts. You can read here about a trail we established at Cranbourne Gardens back in 2016 to highlight the many small eucalypts suitable for both streets and home gardens.

And in this article for GardenDrum, Sharon Willoughby (now working at Royal Botanic Gardens Kew in London), includes some lovely detail about the herbarium specimens collected by Mueller, and how they ended up in the National Herbarium of Victoria (part of Royal Botanic Gardens Victoria).

This is a picture included in that article, of some happy Gardens staff with representatives of the Bjarne K Dahl Trust near the same tree I photographed in early April this year.

As a horticultural specimen it has a lot to recommend it, in addition to be being 'small' (to 10 metres, or much less when multistemmed in a mallee situation). The leaves are leathery and while very typical in shape for a eucalypt, they have a chunkiness and conciseness of form that is rather pleasing.

The cream-coloured flowers are large enough to ornamental, without being ostentatious, and there are plenty of them. Occasional flecks and blushes of pink on the flower-cap (the 'outer calyptra'), sit comfortably among the deep pink younger twigs. 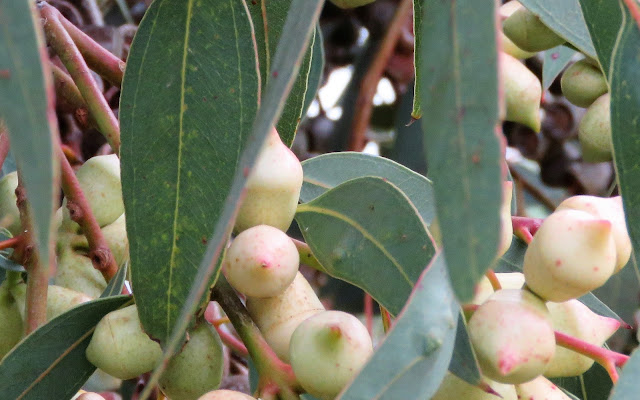 The tight clusters of flowers are followed by bulbous, short-stalked fruits, with a pretty waxy coating. The common name Cup Gum refers to shape of the fruits, and probably also the flower base (the floral tube or hypanthium, from which the fruit develops). 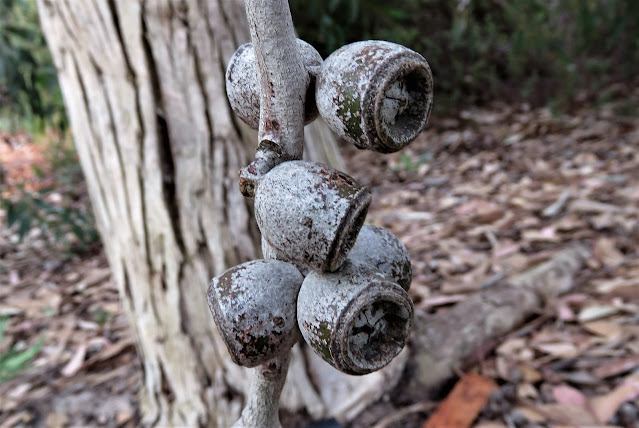 Cup Gum grows naturally from Mueller's collecting location northward to the Lofty Ranges, and southward to the Fleurieu Peninsula and Kangaroo Island. Dean Nicolle in his appropriately named book Smaller Eucalypts for Planting in Australia, suggests it could be grown in most near-coastal or slightly inland areas from Adelaide around to northern New South Wales, as well as in the north-east of Tasmania and south-west of Western Australia.

Dean points out that it would be a good selection for planting under utility wires. It might even be coppiced in some situations, which would be equally attractive. We keep our clump of Cup Gums in the Australian Garden single stemmed, and free of powerlines. 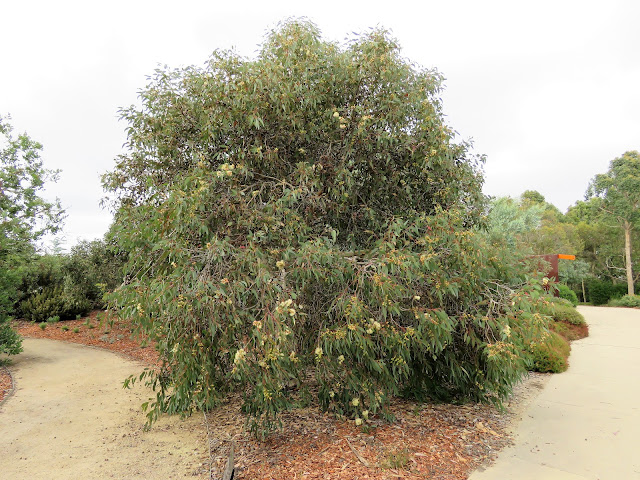 Mark Gallon said…
Nice succinct article on one sample of a great genus. And a good reminder to head back to the Australian Garden in Cranbourne
7:37 am, June 01, 2022

Talking Plants said…
Plenty of good reasons to head out to Cranbourne Gardens. Thanks, and enjoy!
7:56 am, June 01, 2022