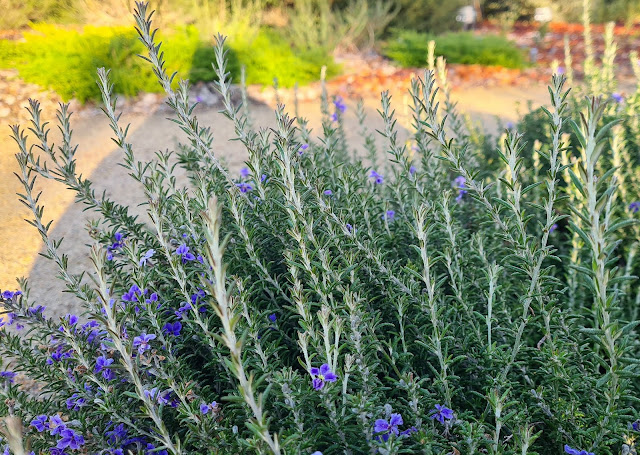 A few weeks ago I explained that while the rosemary, Rosemarinus, is now Salvia, the species name (rosemarinus) happily carries through that historical and cultural connection. Today's plant is commonly called Rosemary Dampiera or Wild Rosemary, and botanically Dampiera rosemarinifolia.

The composition of the species name refers to its foliage looking like a rosemary, which it does. Its flowers too are not unlike a rosemary in colour and, at a distance, crumpledness.  And you'll have to excuse the moisture adhering to the flowers - it was that kind of winter's morning, on Howson's Hill at Cranbourne Gardens in early July. 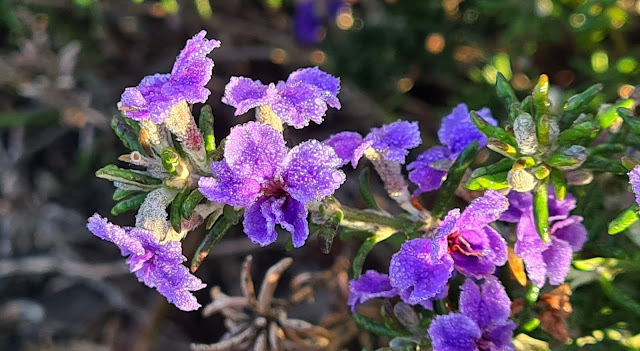 Close up the flower is quite different and clearly not like you find in the mint family, where true rosemary resides. If you crush the leaves, there is no obvious aroma, again atypical of the mint family. 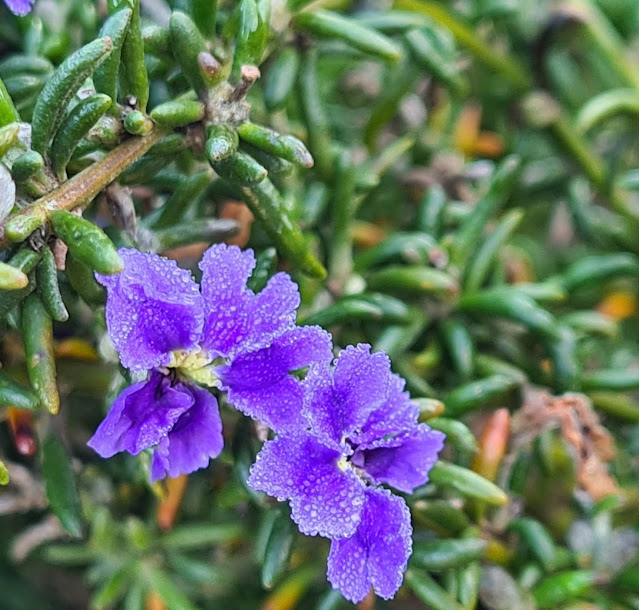 Dampiera is of course a very Australian genus, of about 66 species, with most found in Western Australia. This genus sits in the Goodeniaceae, with Goodenia, which often looks like a yellow-flowered version of Dampiera.

We have eight speices in Victoria, one of them Dampiera rosemarinifolia. That species, the Rosemary Dampiera, is common in the north-west corner of the State, extending across southern South Australia.

A few Australian species remind people of rosemary, which is not surprising given the Mediterranean flora has many parallels in southern Australia.

The namesake of Dampiera, William Dampier, thought as much. He was the seventeenth century explorer who touched on the north-west coast of Western Australia twice, over seventy years before Cook landed at Botany Bay.

Dampier named an island near the present eponymous town in Western Australia, Rosemary Island. This is presumed to be because a local daisy on the island, Olearia axillaris, reminded him of rosemary. He did collect Dampiera but obviously not this species from the east. 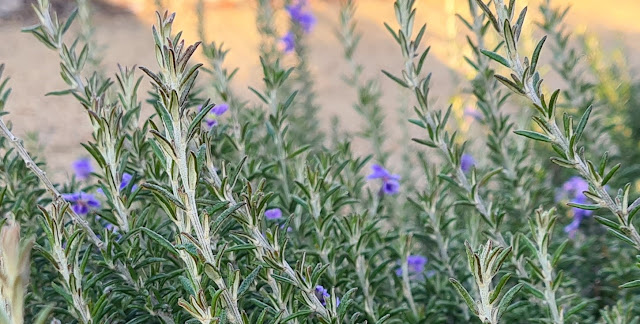 If you look closely at the leaf of the Rosemary Dampiera you'll notice the 'recurved' margins, bending back under the leaf. This and the lack of an toothed edge to the leaf usually distinguish it from some similar-looking Dampiera species, including Dampiera lavandulacea which resembles another aromatic Mediterranean herb...

The recurved margin and smooth edge to the leaf do nothing to dispel its resemblance to true rosemary (a Salvia...) though. For that you need to look at the flower a little closer or crush the leaf. 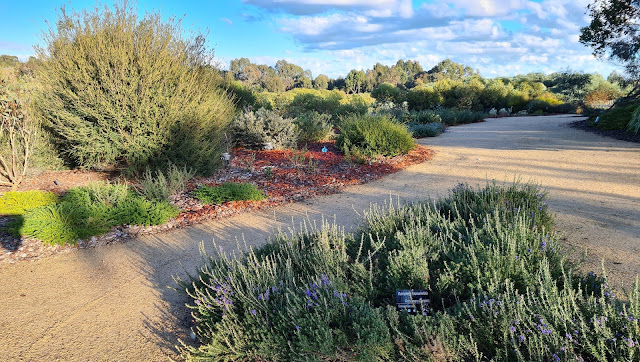 DaveB said…
Hi Tim
Love your blog on Rosemary and Dampiera rosmarinifolia - thanks.
The Dampiera genus is a fascinating one. We (that is the Wildflower Society of WA Northern Suburbs branch, in Perth) propagate nearly 30 different Western Australian Dampiera taxa at our community nursery - but not Dampiera rosmarinifolia!
It seems there is a very disjunct occurrence of it in WA near Hopetown on the west coast - although the WA Herbarium doesn't recognise that as a valid name for it (as it is considered that Dampiera rosmarinifolia doesn't occur in WA)!
Regards Dave
9:23 am, September 22, 2021

Talking Plants said…
Thanks Dave. I have a lovely pin of a Dampiera flower which I think might a badge for your society or related one in WA! You've got at least let us have on species to ourselves... All the best, Tim
9:27 am, September 22, 2021