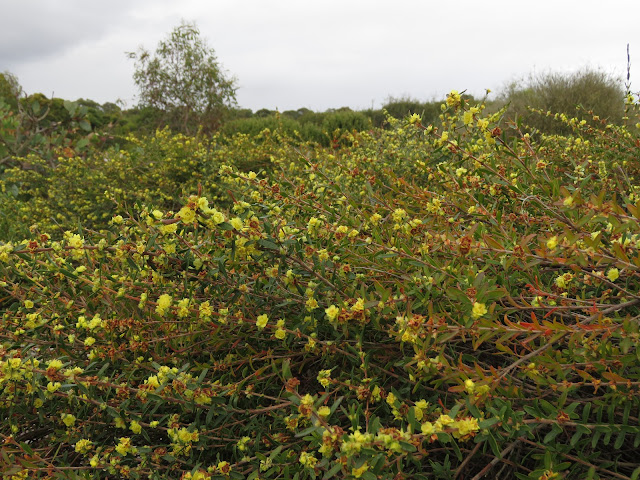 Sometimes I do what I'm told. Australian plant expert and enthusiast, Rodger Elliot, suggested I write a post about this yellow-flowered, almost-ground-hugging shrub planted in small drifts on Howson Hill, the high point (in all senses) of the Australian Garden at Royal Botanic Gardens Cranbourne.
Our manager of horticulture at Cranbourne, John Arnott, who is standing with us at the time, agrees. He confirms that the Cranbourne Friends propagate and sell this plant, so you may be able to pick one up at their next public plant sale on Saturday 8 May. 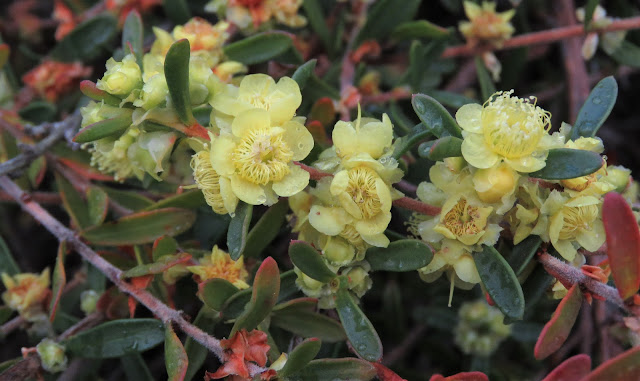 It's the Golden-flowered Myrtle, Hypocalymma xanthopetalum. As the common name suggests, it's in the family Myrtaceae, along with eucalypts, tea-trees and bottlebrushes, as well as small shrubs like Astartea and Homoranthus.
There seem to be about 27 to 29 species of Hypocalymma, all native to Western Australia, and a few found in gardens across the country. White Myrtle, Hypocalymma angustifolia, with white or pink flowers, and the white-flowered Hypocalymma cordifolia, are the most commonly planted.
If you want yellow flowers, Hypocalymma tetrapterum is a similar looking species to the Golden-flowered Myrtle, but without, as Roger Spencer notes, hairy branches and leaves. You can see those distinctive hairs on the stems in this picture of Hypocalymma xanthopetalum, along with the capsules starting to form on some spent flowers. 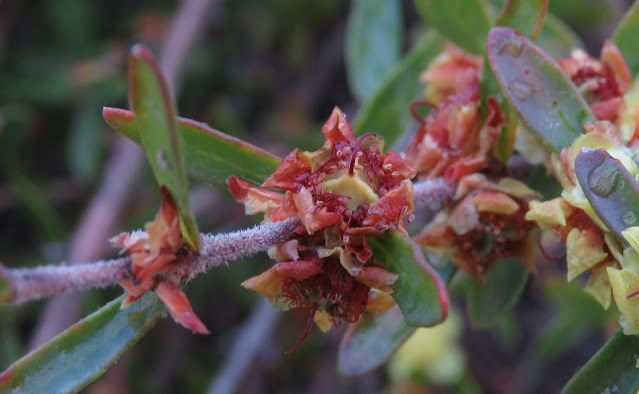 This plant works well in small clumps or drifts (clouds if you like), as we've done here in the Australian Garden under the guidance of Paul Thompson who worked with Taylor Cullity Lethlean (TCL) and our own staff on the original design and planting for this area.
Rodger recommends this plant not only because it looked good in March when I took these photos, but because it looks good (and yellow) for most of the year. It's flowering season is quite a bit longer than the sometimes reported 'late winter and spring', although Western Australia's online flora, Florabase, does record it as flower from July to October and March.
At a maximum height of about 1.5 metres this is a good understorey or rockery shrub. Where it grows naturally, between Perth and Geraldton, it's found in open woodland on sand.
You probably know that 'xantho' means yellow so the species name in this case is very helpful. The genus name, Hypocalymma, means 'under veil (or hood)', which is apparently a reference to the way the outer layer of the flower (the calyx or sepals) look in bud.

Mostly though, its open flowers, open much of the year. 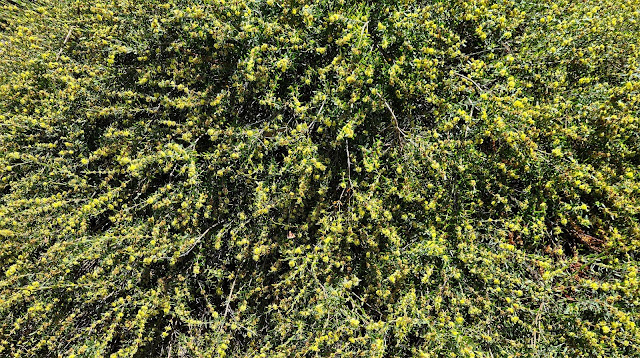