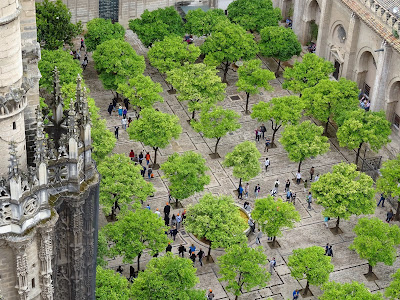 If you get the chance to journey around the Andalusian region of southern Spain, you'll see a lot of Seville or Bitter Orange (Citrus x aurantium, the 'bitter orange' group). That's because it grows well in this hot Mediterranean climate, it's shady all year and has evocative perfumes in flower and fruit. 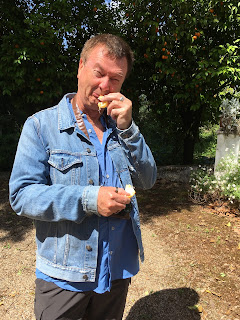 The fruit is, as the common name says, bitter, and its oils end up in Chinotto, Grand Marnier and the candles of essential oil devotees.

In Seville, I was told, the Bitter Orange is grown because no-one will eat or use the fruit. The Brits (and I think the French), though, make marmalade out of it (with lots of pectin and sharp flavour it makes a perfect marmalade fruit).

In 1997 Professor David Mabberley sorted out the nomenclature of edible citrus, concluding that the botanical name for the bitter orange was probably based on a plant cultivated in Europe, now resting in the herbarium of Swedish nomenclatural overlord, Carl Linnaeus.

The 'x' in the name means hybrid. This is a hybrid between a pomelo (a large grapefruit like fruit) and a mandarin. You can read more about the pomelo and other hydrids in a few of my previous posts (1, 2, 3).

Within this hybrid group are both bitter and sweet oranges. Those at the bitter end have more of the pomelo (C. maxima), and those at the sweet end, more mandarin (C. reticulata) and sometimes called Citrus x sinensis. 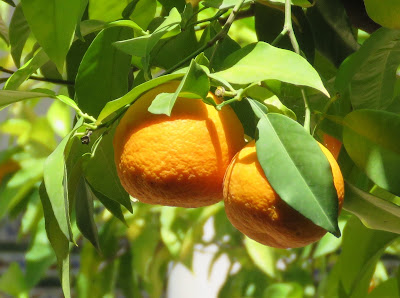 I gather the ones with more pomelo have the distinctive winged stalk, often used to distinguish the bitter from the sweet in southern Spain. And the Bitter Orange is the landscape tree of choice. 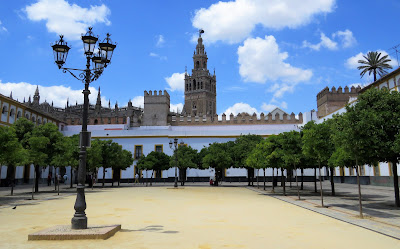 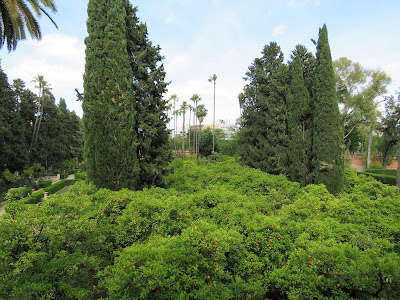 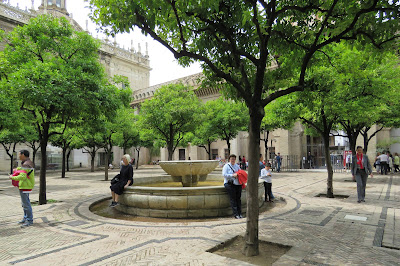 The first orange trees arrived in Europe via the Middle East or India, originally from China or thereabouts, and the fruits would have had a thick bitter skin. The arrival of the orange tree as an ornamental plant in southern Spain seems to have come with the Moors who moved into Spain around 600 AD (although the orange trees seem to have come later). Today they feature strongly in the gardens of the alcázars and mosques throughout Andalusia. 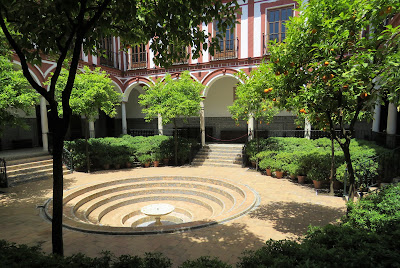 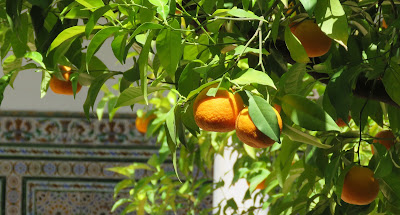 When oranges first arrived in Europe a big belly was linked to happiness and good health (perhaps). Now of course we are (rightfully) obsessed with obesity, and about 'cures' for our tendency to over eat. The Bitter Orange has been mooted as a treatment of sorts. The fruits contain chemicals called synephrine alkaloids, like those found in an odd cone-producing plant called Ephedra. Dietary supplements from Ephedra have been banned in some countries due to adverse side effects.

Although the use of citrus oil is promising, in 2006 more clinical trials were deemed necessary 'to draw adequate conclusions regarding the safety and efficacy of Citrus aurantium ... for promoting weight loss'. However a more recent study (2016) concludes that 'bitter orange extract ... [is] ... safe for use in dietary supplements and foods at the commonly used doses'.

Personally I'd suggest you eat a little less, but enjoy the occasional toast and marmalade after exercising among Bitter Orange.

Thanks to Jana Bate for her picture (at the top) of the orange groves within the Catedral de Santa María de la Sede in Seville, taken from the Giralda; and to Kit Wignall for being the subject of the fruit-eating experiment, photographed by Lynda Entwisle.
Email Post

Stuart Read said…
Muchas gracias, Timotei, nice to hear/see more of Andalucian patios and calles (streets). THe Portuguese also make marmelade - the word, even, 'mermelada' is Portuguese. Long history, marmelade - and an international one at that. Grand Marnier has two 'r's, by the way. A friend, Peter Cousens, was so impressed by Cordoba's and Seville's bitter-orange-tree-lined streets, he grew his own on Albermarle St., Newtown, Sydney - only to have battles with the dear Council about maintenance, 'mess' (all those petals, that squishy fruit)! the bother. Such is Moorish vision in the face of inflexible tick-box thinking. It's the SMELL of those trees and streets and patios in bloom (you don't mention, but do show, a monastery/Christian cloister - quick to take over Moorish ideas/forms/plants, the Christians/Spanish! and short-memories). That is what struck me and remains mind-bound about Andalucia, 'olor' / fragrance! Aye, ole and more thanks to you for the reminder. Many lessons we could learn from Spain...
9:23 pm, September 13, 2017

Talking Plants said…
Hello there Stuart. Nice that marmalade has that Portuguese connection, the country we visited after Spain (and enjoyed very much). And will fix that Marinier reference (I did meet 'his' widow, in Nice, but that's another story...). Correct, the smell as well although not so strong in early summer, except when crushing leaves or standing on fruits. The colour is what I remember most - such a great contrast with the buildings and sky and etc.
10:14 pm, September 13, 2017