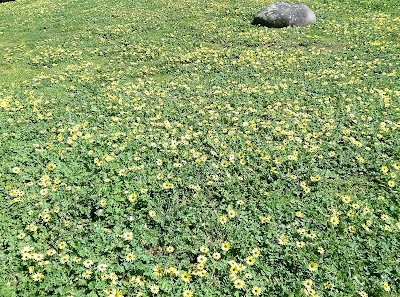 If you are an Australian, your first reaction to this image is likely to be one of disgust and frustration. Capeweed is an irritating incursion into many an suburban lawn, and an expensive - and most would consider an unattractive - weed of crop and grazing land. Thankfully it should fade from view in our country by Christmas Day.

On the other hand, in its native homeland of South Africa, Arctocheca calendula is considered a 'versatile ground cover that can be used in a garden for holding soil and for a colourful display'. That it probably does, in Victoria, and much of the rest of the world, as well.

If you look beyond the weed designation you'll notice a plant with incised, lyre-shaped leaves, each gently toothed and mildly hairy. The underneath of each leaf is softly hairy, what we call tomentose. 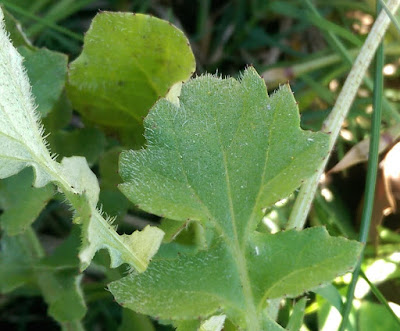 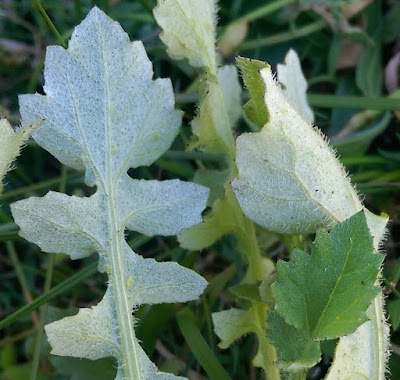 The flowerheads are a cluster of small flowers, like most daisies, with the outer ones sprouting a papery, two-toned yellow petal. The inner flowers are very Melbourne - black. You can see the pollen containing anthers sticking up above some in this picture. 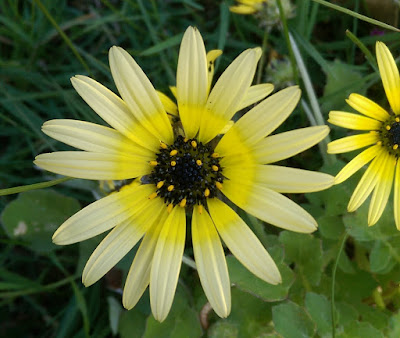 It's hard to do. To appreciate's its unique combination of characteristics. To marvel at what makes it a distinct species. Even in its native habitat in South Africa it frequents disturbed soils, carrying the common name of Capeweed there too, as well as the more neutral Cape Dandelion.

There are four or five species of Arctocheca, all from South Africa and Mozambique, with three of them naturalised in Australia and in Victoria. In VicFlora, Capeweed is described as a 'widespread weed of lawns, cultivated areas, pasture and other disturbed sites'. It has a similar distribution, I gather, in all southern Australian States, with the earliest reports from the far south-west, near Albany, in 1834. 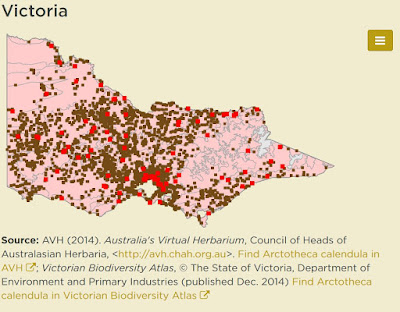 As this map from VicFlora shows, it's hard to miss. My photographs are from a park in and nature strip in the suburbs of Melbourne, taken in early October. It could be anywhere - well at least anywhere there has been some disturbance and a little moisture in the soil - and almost anytime, although it fades in time for Christmas, ready to flourish again in autumn.


In South Africa it spreads by overground stems called 'stolons' or runners, and by seed. In North America, Capeweed is usually is sterile but spreads readily through runners - rarely, the plants are fertile and then considered 'highly invasive'. Here in Australia it depends, apparently, on the particular variant and the location.

While clearly all over the place, and all over the globe, it seems to still have some potential to expand its range. In California is is considered a weed 'with the potential to spread explosively' and in Italy, in early 2016, it was announced as an 'emerging invasive species'.

So it is here to stay. It can displace native species, sometimes already under threat of extinction, but in lawns and disturbed sites near towns and cities, well perhaps it's best to learn to like it a little.

Bees and apiarists like it. While it can be eaten by stock*, young plants may poison and a high intake will taint milk. Sadly you can't eat it: Capeweed is generally considered a poor and potentially disagreeable food for humans. (Unfortunate, because as you rip it from your lawn you might notice a red or purplish tint to the base of the plant, presumably coloured by anthocyanin, a water soluble chemical you find in various 'good for you' plants like beets and trendy purple brussels sprouts.) 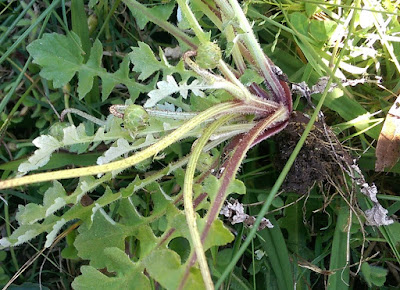 Best to simply botanise, or romanticise. 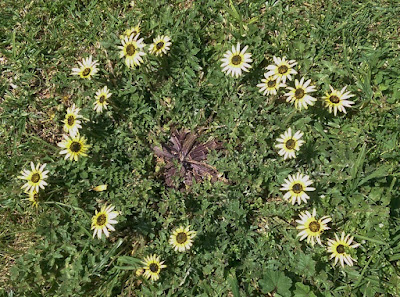 *Dan Murphy (28 December 2016) notes that when he was in South Africa he saw dassies (a hyrax/badger kind of creature) grazing on them, and eating the 'crown'.
Email Post

Dan Murphy said…
Hi Tim,
When I was in South Africa I saw Capeweed being eaten by Dassies. They were very effective at eating the crown. One of probably many natural controls in its native range that we don't have here in Australia.
1:03 pm, December 28, 2016

Talking Plants said…
Ah, Interesting. Something that isn't poisoned, and likes to eat the crown would seem the perfect control! Tim

Unknown said…
Thank you!!! I have been trying to identify this plant for months, wondering whether it was edible like the dandelions, groundsel and the various thistle rosettes that it often grows among and looks very much like! It's definitely a dandelion look-alike that none of the forage-gurus on youtube warn you about, as far as I can see. Instead, the oft-heard wisdom is that there are no poisonous dandelion lookalikes - sheesh, people! Talk about being blind to something that sits under our very noses!
Even if it may not actually be poisonous, surely not considered a edible weed?!
3:08 pm, August 08, 2020

Anonymous said…
Has anyone ever tried to uproot the entire infestation? In my California back yard, I pulled so many (3 full days) that I eventually discovered w my shovel a giant, woody root system, think barnacles, on a wooded stem the size of a tree limb. I dug a trench to try to unearth it and put an end to the cape weed hot spot but it went so far that I was sure it would continue under the deck so I gave up. Wondering if anyone has discovered a similar branch like root?
4:17 pm, April 06, 2021

Talking Plants said…
Not that I know of... Intriguing idea and might explain why it is so hard to shift! I've found large woody root systems but nothing of that size. Still, if it had been there for years/decades, it might be expected. I guess you learn to live with a plant like that. Tim