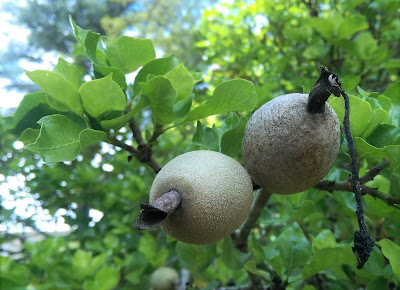 I've mentioned Gardenia thunbergia a couple of times in regard to its pollination. The white flowers gracing many botanic gardens for the last few months have a long floral tube (the narrow part of the trumpet) and produce a seductive perfume in the evenings, inviting hawk moths with their extended 'tongues' to dip into the nectar the same way they do for Darwin's famous Star of Bethlehem Orchid (Agraecum sequipedale). Although in that case the machinery of the flower works lightly differently, with nectar tube off to one side of the flower. 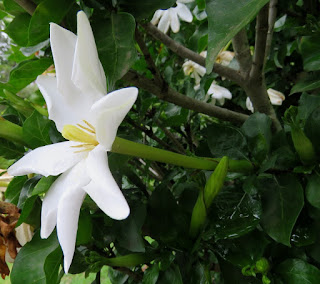 The common name White Gardenia is not particularly helpful given most species of Gardenia have white flowers. Other names like Tree, Forest or Wild Gardenia capture some of the grandeur of the plant but none tackle the striking beauty of its flower or its various ornaments. Even the buds are odd, with the cluster of 'Shrek-ears'. 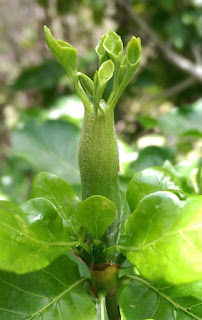 The Afrikaans name Buffelsbal is more memorable and helpful: it means buffalo testicles, a reference to the shape of the fruit. Those woody fruits persist on the bush, waiting for some predatory animal to chance by and take a bite. In its natural habitat elephants, buffalo and large antelope such as the Kudu will do the job. The seed has a tough outer coat and can pass through the gut of, let's say an elephant, unharmed.

Alice Notten from Kirstenbosch National Botanical Garden seems to understate the harvesting of Gardenia thunbergia seed as 'hard work'. She says: 'The secateurs we use to cut off the fruits are blunted by the end of the process, not to mention our hands that are also worn out. We have to use hammers, or any heavy, blunt instrument we can find to break the fruits open, and nails and heavy duty spoons to scoop the seeds out. It is heavy, laborious, unpopular work!' It's easier for elephants. 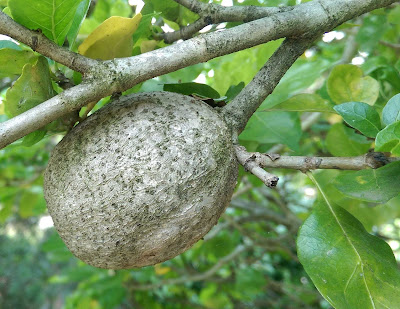 Elephants are implicated in the dispersal of a range of different kinds of plants. The White Gardenia is a small to medium sized shrub but they also help spread the seed of trees such as African Sausage Tree, Kigelia pinnata, grown in subtropical and tropical gardens in Australia. In Asia they reputedly assist the the giant flowering parasitic plant, Rafflesia. In fact a number of plants with large (tough) seeds may now under threat due to dwindling elephant numbers around the world.

Sometimes the elephants just make life difficult for plants. In Richard Mabey's The Cabernet of Plants, the book I mentioned last week, he explains how African elephants trash the Baobab (Adansonia digitata) to get at the moist tissue inside the swollen trunk (of the plant, not the elephant). Luckily the species was pre-adapted to this kind of treatment after surviving fires on Madagascar, where its ancestors evolved. Bark grows back and new stems rise from the remains of old.

If you don't have any elephants, buffalo or antelope in your garden, the woody fruits are likely to stay on the bush for a very long time. Luckily the species doesn't seem to set fruit as readily in Australia as in Africa so our bushes don't end up looking like this specimen photographed by Kelsey Tucker in the Kirstenbosch National Botanical Garden in Cape Town (where elephants, I'm assuming, have been excluded). 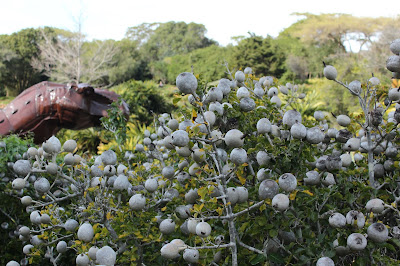 This elephant-fruited species is not uncommon in botanic gardens and a few private gardens, but no where near as ubiquitous as the various cultivars of Gardenia angusta. There are about 200 species of Gardenia, a genus named after the appropriately named Scottish doctor and amateur botanist, Alexander Garden. Gardenia thunbergia is one of six from South Africa and the species name honors another doctor and botanist, this time from Sweden, Carl Peter Thunberg (who collected and described plants from the Cape region of South Africa).

According to the Royal Botanic Gardens Kew website, Gardenia thunbergia is 'usually found in evergreen forest and on forest margins but occasionally in woodland and on the veld (dry habitat in southern Africa dominated by grasses and low shrubs)'. These sound like places where elephants can get about. Kew also notes that aside from its use in traditional medicine and for the making tools, the plants may have what they call 'molluscicidal properties' - that it, it might make a good snail and slug repellent. 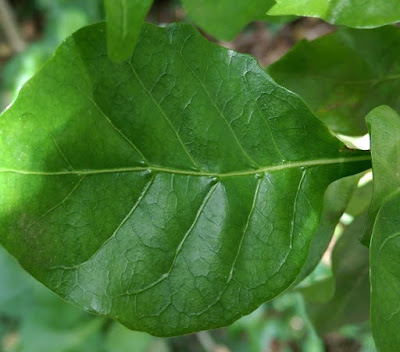 On the other hand, like many in the plant family Rubiaceae, the leaves of Gardenia thunbergia have tiny little pimples on the upper surface of the leaf (above), near to where the veins heading out to the edge of the leaf join the mid-vein. If you flip the leaf over you'll see a dimple in the same place, a deliberate home for small insects, mostly beneficial (they can eat fungal spores, pest-insect eggs or even smaller pest-insects)

The message here is that if you grow Gardenia thunbergia in your garden you may deter snails and pest insects, but attract elephants (and a few friendly mites). You can decide which are worse for your plants or perhaps more likely to chance upon your garden. 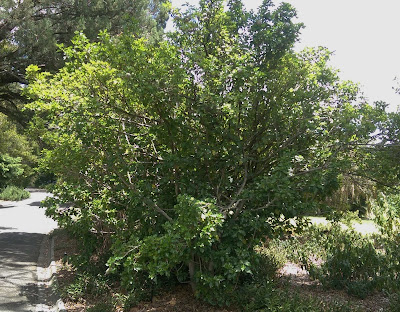 Images: The plant with the prolific fruit production is from Kirstenbosch National Botanical Garden, and photographed by Kelsey Tucker. The others are by me, from the Melbourne Gardens, Royal Botanic Gardens Victoria, on 4 January 2016. Thanks Neville Walsh for the suggestion - causing me to wonder why I hadn't covered this species before - and Kelsey for emailing Neville with the Kirstenbosch photo and another of a sign about the elephant story. (On 12 February 2016, flowers of this species featured in the Royal Botanic Gardens Victoria 'Flowering Friday' posts on Twitter and Facebook.)
Email Post