Grow Franklinia and give a plant without a home, a home 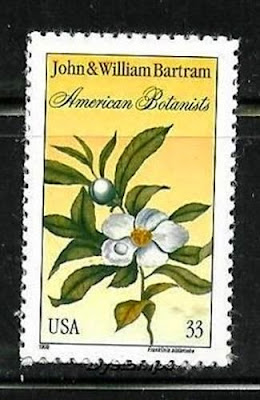 I was asked the other day by someone moving from Mount Macedon to North Fitzroy whether they could grow Franklinia alatamaha in their new garden. An unusual question about an unusual species. This is not the first tree you'd think about planting.

The questioner was a writer who doesn't really write about gardens but clearly does have an interest in them. So I tried to help by saying, probably not. At Melbourne's Royal Botanic Gardens we have one specimen in our nursery (donated to us two years ago by Peter Teese of Yamina Rare Plants) but none growing in the main collection.

While you can find this species in specialist nurseries around the world, it's extinct in the wild. There is no last chance to see what is sometimes called the Franklin Tree, unless you visit a garden, and not yet Melbourne's Royal Botanic one. 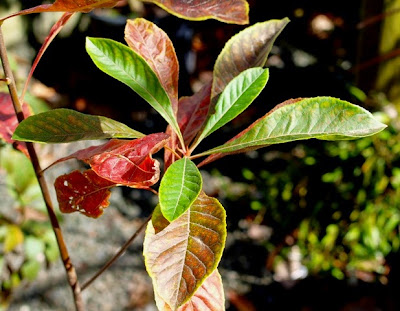 The story of Franklinia is summarised well on the Missouri Botanical Garden website, with more detail provided by Lucy Rowland in an article published in Terrain.org, It starts with King George III of England appointing the Quaker farmer John Bartram as his Royal Botanist for North America in 1765.

In his first year as Royal Botanist, Bartram and his son William found an attractive small tree on the banks of the Altamaha River in Georgia. The trees grew throughout a hectare or so of river frontage but nowhere else in Georgia, in North America or, at that time, in the world (perhaps the universe, but harder to confirm).

Son William returned to Georgia in 1773 to collect seed which he successfully germinated and grew in his garden in Philadelphia. It turned out to be an attractive specimen and became increasingly popular in North American and European gardens.  It also turned out to be a new genus.

In 1785, William Bartram's cousin, Humphry Marshall, gave the plant its botanical (and hence common) name, honouring the 18th century polymath and friend of the Bartram family, Benjamin Franklin. The species epithet is an odd spelling of the river name.

Franklinia was, and continues to be, classified in the plant family Theaceae, along with Camellia (the source of tea and of lots of pretty garden plants), and Gordonia and Stewartia (both with flowers and leaves a bit like Franklinia). There is only one species of Franklinia although you do sometimes see the Fried Egg Plant, Gordonia axillaris, and other species of Gordonia, called Franklinia. That classification isn't generally accepted. 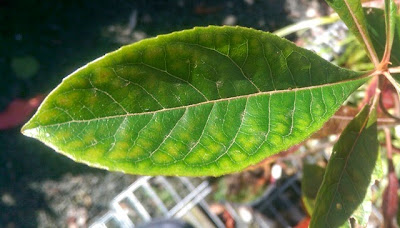 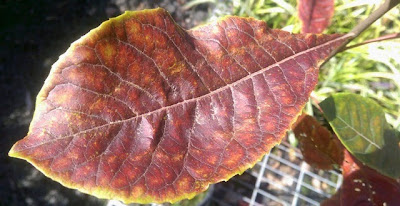 Franklin's Tree looks quite a bit like these other genera but is always deciduous (like Stewartia), giving it the lovely autumnal colour in the image above. Unlike Stewartia, it has flowers without any stalk (see the stamp at the top) and a woody fruit that splits alternately from the top, then the bottom (as you can see here...). 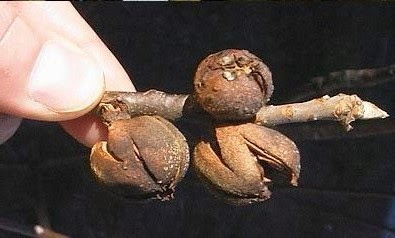 Unfortunately, in the tail end of the eighteenth century most of the land around Altamaha River was cleared for cotton farming. The cotton also brought with it pathogens that may have spread into the fragments of remaining native vegetation killing plants like the Franklinia. Climate change and floods have been blamed too, but in any case the tree was extinct in its natural habitat by 1803.

Which is why all plants you see alive today are sourced from seed gathered from Bartram's tree grown in Philadelphia or perhaps from other seed collected in 1773. The result is a consistently pretty garden plant with little genetic variation.

You don't see it often in Australia. When I was Director of Royal Botanic Gardens and Domain Trust in Sydney I tried to find a specimen in the collection there, just out of curiosity. I was unsuccessful although it was listed on the census as growing in the 'Rare and Threatened Bed', one of the rectangular formal gardens near to the National Herbarium of New South Wales building. Rare and threatened I guess, if that's a compromise between extinct in the wild and uncommon in cultivation.

Lucy Rowland says Franklin's Tree is easy enough to propagate from cuttings or seed but difficult to transplant, susceptible to root rot and 'not...particularly vigorous'. It needs rich, well-drained, acid soil and plenty of water, just like it had by the riverside. It tolerates cold better than severe heat it seems.

So it should perhaps be more widely grown in southern Australia, albeit in cooler mountain districts. That said, on reflection, my friend lately of Mount Macedon and recently of North Fitzroy should give it a try. Such a fascinating pedigree deserves special horticultural effort. 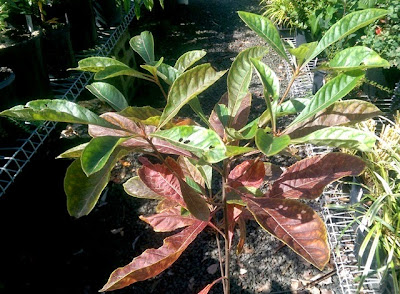 Images: The stamp at the top was issued in 1999 and the image has been copied from eBay, but you can find another in the U.S. Stamp Gallery. The fruit is from a fact sheet on the Virginia Tech website. The other pictures are of the specimen in the Royal Botanic Gardens Melbourne's nursery in late March.
Email Post