Western Australian Christmas Tree not so sweet in the east 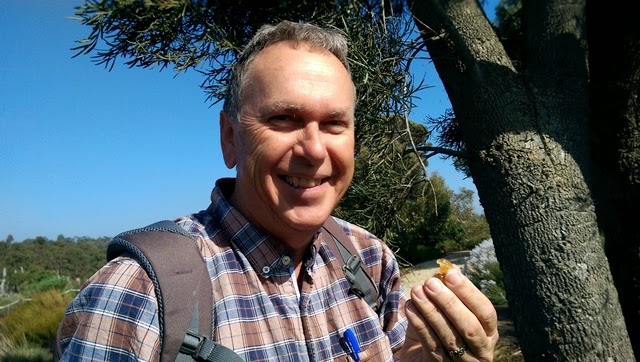 So he knows something about plants and in particular the plants of Western Australia. I was keen to show him Howson Hill, part of the second stage of the Australian Garden. Steve had been there for the opening of Stage One but hadn't seen the recent developments.

He was impressed by it all but enjoyed seeing Western Australian plants thriving on Howson Hill, including some he had named himself. One he certainly hadn't named, but I wanted him to see was our Western Australian Christmas Tree, Nuytsia floribunda, the largest (semi)parasitic plant on Earth.

Nuytsia in in the mistletoe family, Loranthaceae, and has only one species which occurs naturally in the south-eastern corner of Western Australia. It gets to 10 metres tall, and is covered in yellowy orange flowers around Christmas time.

This is one amazing plant. It's a semi-parasite (that is, it also has green leaves and does some of its own food production) that connects to the roots of any nearby plant. It's not choosy - annuals or perennials, grasses or shrubs, plants or powerlines... To get inside the root of the plant it cuts half way through and then penetrate into the food and water transport system within. Steve said that in Western Australia Nuytsia has been known to black-out houses when it cuts through an underground power-line instead of a root. 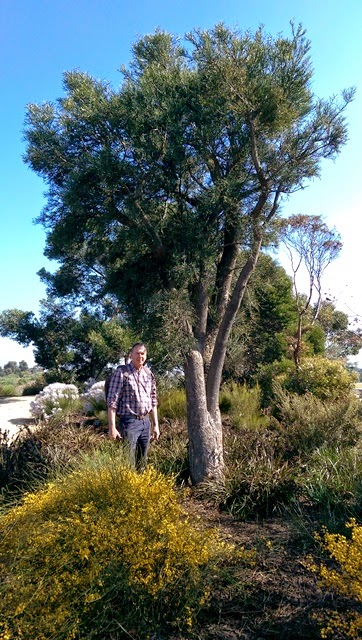 This Western Australian Christmas Tree at Cranbourne is one of the first plantings on the site, moved there not long after it was purchased, in the 1970s. Thanks to the horticultural expertise of Warren Worboys, Curator of Horticulture, seedlings were germinated and attached to willing hosts. Three were planted out at Cranbourne, only one surviving to maturity.

There are very few examples of this species growing in cultivation, particularly in the east. We promote ours as the most southerly specimen in the world, and sometimes as the most easterly.  Steve Hopper reminded me that one of the early Directors in Sydney, grew it to at least cotyledon stage (that is, with seed leaves), discovering to his surprise that it had three or four of the damn things. It's a 'dicotyledon' which tells you how many cotyledons you should expect (usually) - two! 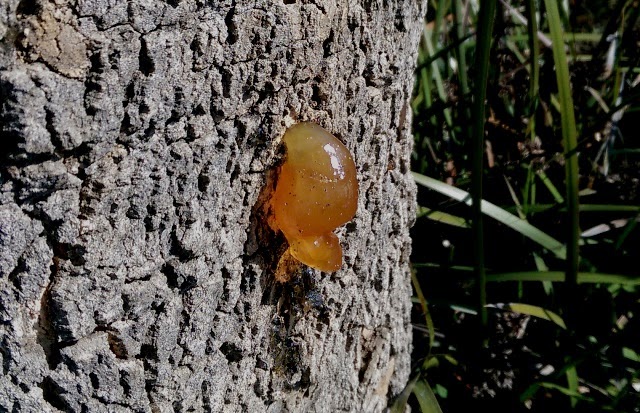 On our visit, in late August it was exuding this transparent to amber coloured resin. With a texture, and as it turns out taste, like silicon sealant, there were half a dozen 3-5 cm in diameter blobs (about the size of a fat cicada) hanging from the trunk. Steve was familiar with them from Western Australia and said the the Noongar, the Aboriginal people living near Perth, ate them as a sweet.

As we tasted a small sample, we regaled each other (and Chris) with stories of how many bushfoods have to be pretreated in some way to remove poisons. In a botanic garden one must also have the permission of someone like the Director and Chief Executive to sample and eat any plant material. Lucky I was on hand. 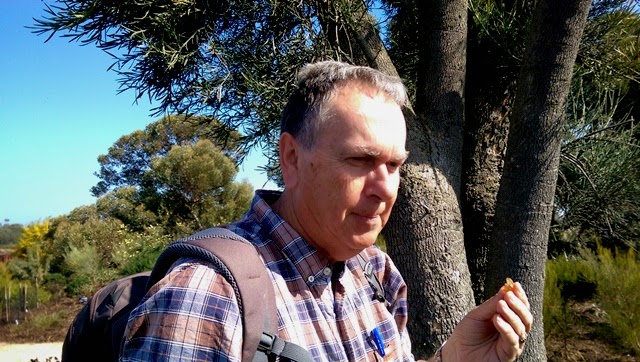 As you can perhaps surmise from this picture of Steve sampling a fragment, it wasn't sweet. In fact it wasn't anything. Just like I imagine silicon sealant would taste without the drying spirit added to it. We didn't die or fall ill. We just didn't want to eat any more. Checking later on the internet I find it reported as a 'sweet gum', eaten raw by people indigenous to its natural area.

Clearly we need some help from Aboriginal people who know more about this plant. Of course it may be that while proud of our achievement, growing Nuytsia at its most southerly and easterly limit isn't good for the production a sweet gum.
Email Post

Dave Bright said…
Hi Tim
I've always thought it tasted rather 'plasticky'over here in the West - your description of it being like 'silicon sealant' does rather resonate though!
The young root suckers are also supposedly edible (once peeled) but I've only ever found them to be bitter!
Good to see the WA Christmas Tree doing so well at Cranbourne - with them tending to take 7-10 years to first flower from seed, any planting is a long-term project!
Regards
Dave Bright
10:06 am, October 28, 2014

Talking Plants said…
Thanks Dave. Glad it's not just my lack of appreciation of a subtle flavour... This specimen has certainly done well but given lack of others anywhere else around here (?) it's either tough to get going in the East, or no one thinks it will work! Best wishes, Tim
12:21 pm, October 29, 2014