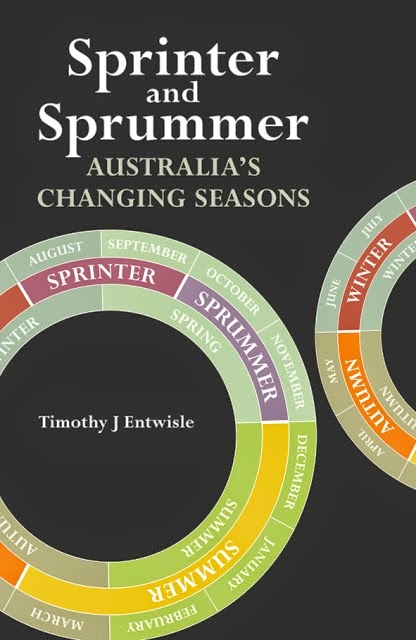 "In all things, saving only in those that are evil, a change is to be feared; even the change of seasons, winds, viands, and humours." Essays by Michel de Montaigne, Book the First, Chapter 43: On Sumptuary Laws (1580; translated by Charles Cotton 1877)

Minutes, hours, days and months are the way we organise our life – sowing crops, attending job interviews, organising lunch with friends, picking up kids from child care, visiting relatives, playing football, getting our hair cut and so on. Seasons are for noting, celebrating and tracking the changes in the world around us. If we get them wrong we don’t lose our crop, job or children. No-one has responsibility for approving the seasons, and they are not anchored by Greenwich Mean or International Atomic Time. Yet they are part of our inherited culture, part of the ritual of living on Planet Earth. Our responses to seasons – like the seasons themselves, as I shall argue – vary from place to place.

The definition of a season seems simple enough but, as I argue in my new book Sprinter and Sprummer: Australia's Changing Seasons (available 1 September 2014), it is misunderstood, misinterpreted and misused. Why do we have four seasons? Why should they each take up three months of the year? Indigenous communities have always known that Australia’s climate is more complex than a simple four-season arrangement. Isn’t it time for all Australians to adopt a more realistic, home-grown system?


When I began this book, in Sydney, I wanted to make two somewhat contradictory points. First, that there is a peak flowering period in most Australian gardens and bushland, and it happens before what we normally call spring. Second, that plants flower all year round, not just in ‘spring’, and I thought I would use the opportunity to feature some of the quirky plants of my local town, and country, Australia.

Three years ago I moved to England, where many of our cultural traditions including our idea of four neat seasons, each three months long, come from. I gained first-hand experience of ‘true seasons’ and the plants that either define them or respond to them, depending on your perspective. I found that even in their homeland, the four seasons don’t always match the annual cycles of nature. So I expanded the scope of this book to address a more fundamental question about whether seasons are ever really ‘fit for purpose’ and to include seasonal stories of plants from around the world. Perhaps it’s not only Australia that needs a thorough review of its seasons – the definition of ‘seasons’ in other countries also doesn’t always match the reality of nature.

I don’t want to overstate the case for having a set of good, robust seasons. Seasons, like most natural phenomena, have been part of pagan rituals for millennia. Each season has been given characteristics much like the Signs of the Zodiac, and with as much value. For example, the Greek elements of air, fire, earth and water have been correlated with the seasons spring, summer, autumn and winter respectively. So what? I’ve seen the Myers-Briggs Type Indicators, a personality classification system much loved by modern employers, mapped against seasons. Again, for what purpose? For two thousand years or so in Europe, and at various times elsewhere in the world (and still today in some communities), ill health was thought to be due to an imbalance in the body of blood, phlegm, yellow bile and black bile (the ‘humours’ alluded to by Montaigne). To cure this imbalance, some of the offending humour was purged from the body or a ‘neutralising’ compound was ingested or applied. What sense is there in matching blood with spring, yellow bile with summer and black bile with autumn, as some have done? Phlegm’s link with winter does feel about right, though! But the point is that while climate may affect our mood and behaviour, any seasonal classification is unlikely to assist in clinical diagnosis, life planning or recruitment.

What I am doing in this book is not new. Aboriginal communities around Australia have for tens of thousands of years recognised two to seven seasons, depending on where they live. Since 1788, all Australians have carried the yoke of four European seasons that make no sense in most parts of the country. We may like them for historical or cultural reasons, or because they are the same throughout the world, but they tell us nothing, and reflect less, of our natural environment. In time-honoured fashion I decided from the safe distance of London that it was time for Australia to reject those seasons, to adopt a system that brings Australians more in tune with their plants and animals; a system to help notice and respond to climate change. So the book took shape.

After two years abroad I arrived in Melbourne in early 2013, to experience nine days in a row with temperatures over 30°C in March, a weather record for the city. As you’ll see, this tallies nicely with my preference for a longer summer season in Australia. Living in Sydney, London and now Melbourne again (I had left Melbourne in 1998 to move to Sydney) I’m convinced that the four traditional seasons don’t make sense in southern Australia. My proposal is that we have instead five seasons based on the climatic and biological cycles we observe around us. I start with the origins and theory of the traditional seasonal system – the ‘Vivaldi Option’ – then review the Aboriginal seasonal classifications used across Australia, followed by my five-season proposal. 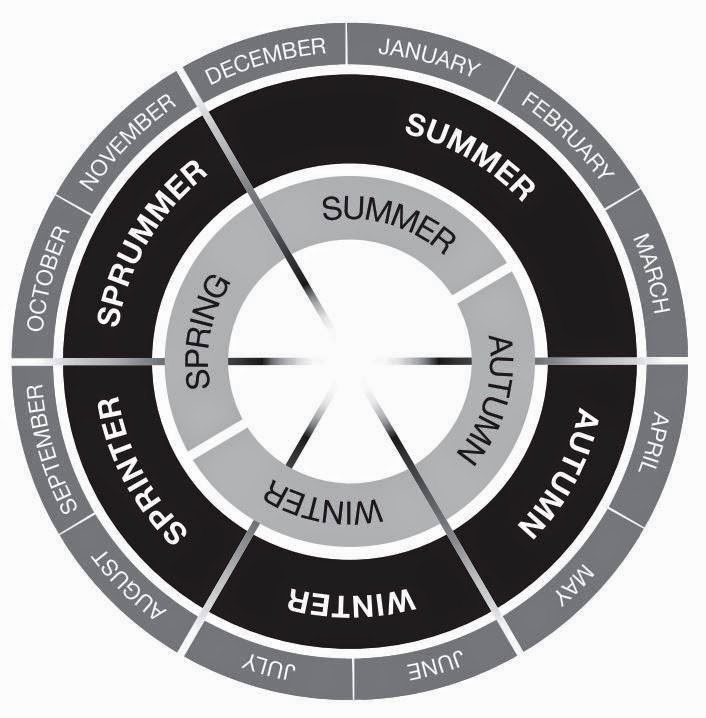 My seasonal year starts with sprinter (August and September), the early Australian spring. That’s when the bushland and our gardens burst into flower. That’s also when that quintessential Australian plant, the wattle, is in peak flowering across Australia. Next is sprummer (October and November), the changeable season, bringing a second wave of flowering. Summer (December to March) should be four months long, extending into March when there are still plenty of fine, warm days. Autumn (April and May) barely registers in Sydney but further south we get good autumn colour on mostly exotic trees, as well as peak fungal fruiting. Winter (June and July) is a short burst of cold weather and a time when the plant world is preparing for the sprinter ahead.


The 'first' season, sprinter, is an early spring and in my mind a no-brainer. It is easy to recognise and backed up by good observational data. The other four are perhaps more aspirational, concepts to test and probe a little further. Although difficult to define, they are the perfect launch pad for stories about the seasonal triggers and tribulations in the life of a plant (and plant-like creatures). Among other things I cover how plants initiate flowers and leaves, why autumn leaves are coloured and what plants do at night. The final chapter considers climate change and how the seasons are changing whether we like it or not. This leads to speculation on whether any system will be long-lasting and a return to the question of whether seasons should reflect reality.

This is not a ‘how to’ book: more of a ‘why not’ one. I want the curiosity that got me thinking about seasons to infect others. That’s why this book extends beyond a simple explication of my new seasons system for Australia. Why it includes the interplay between seasons, people and plants. And why I’m happy to float a few boats for others to board, or sink. This is exactly what a good seasonal system, and if I might add, a good book on seasons, should do. It should make us think, and make us think differently. There are no perfect or correct seasons. I am happy for my seasons to be rigorously debated and tested, and I will be thrilled if through more people observing and monitoring the natural world I have to totally redesign my system. Given there is no legislation governing our seasons and our lives will not suffer if we get it wrong, go for it!

This book is unashamedly a mix of science, rhetoric and opinion. I hope it’s provocative, fun and from time to time informative. I have drawn inspiration and information from all kinds of places, some of them listed at the end of the book. I’m sceptical by nature but I’ve happily included conjecture and perception alongside peer-reviewed evidence and analysis. There is definitely some hand-waving and passionate persuasion here but my approach and my conviction are scientific. I’m with Thomas Huxley on this: ‘Science is, I believe, nothing but trained and organised common sense …’

*This post is an edited version of the Introduction in Spinter and Sprummer: Australia's Changing Seasons (2014), available now for $29.95 from CSIRO Publishing. An extended version of this post was broadcast two days ago on ABC Radio National's Ockham's Razor - you can listen via the podcast available on that site.
Email Post
Reactions:

Michael said…
The timing of this publication could not have been much worse in my mind.

There are so many unknowns in the new climate scenario that speculating on the boundaries which separate the seasons is irrelevant to say the least.

A 2012 report by the World Bank suggested that in the circumstances of a 4 degree hotter world by the end of the century there will be a “cascade of cataclysmic changes that include extreme heat-waves, declining global food stocks and a sea-level rise affecting hundreds of millions of people”.

ps, I posted this on Garden Drum, but they have chosen (so far) not to allow it.