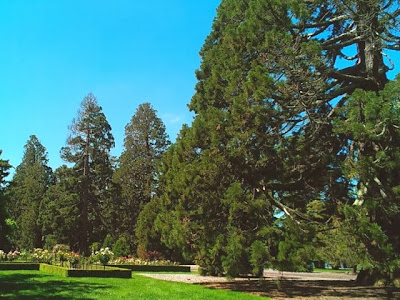 Bigger than Melbourne's Royal Botanic Gardens and almost as old, the 40-hectare Ballarat Botanical Gardens began life in 1858 in a police horse paddock. As with many of the State's regional botanic gardens it was established just a few years after the city itself.

There are three quite different zones with the more intensive botanical section long and narrow, pivoting on an magnificent avenue of Giant Redwoods. 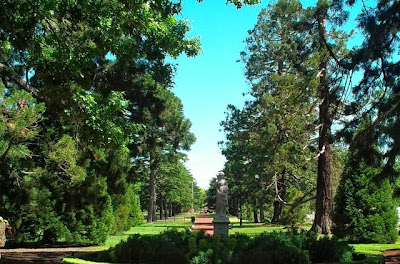 The 28 redwoods (Sequoiadendron giganteum) were planted in the 1860s and 1870s, in a mile long avenue. The trees are in decline, perhaps due to recent dry years, and replacements are already in place where a couple have failed. Yet it still have a grandeur that only this kind of mass planting of large trees can create. 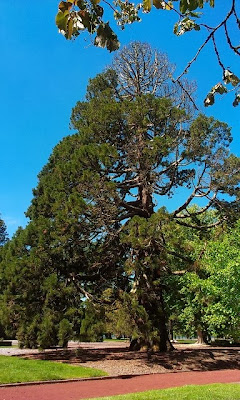 There are two chunky Tasmanian Blue Gums, a legacy of Ferdinand Mueller's promotion of this species as a drought-tolerant street and park tree. I gather they too were most likely part of a late nineteenth century avenue. 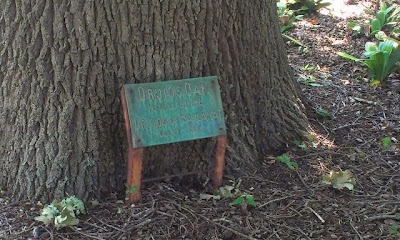 These are just a few of the 52 significant trees in Ballarat Botanical Gardens listed by the National Trust.

In addition to this fascinating and important tree collection there is a horticulturally (and species) rich border along Western Walk (inside the Gillies Street fence) and some pretty bedding displays. You'll also notice plenty of statutory. I saw some of the more classical pieces but not the famous row of 26 Prime Ministers (with J. Gillard and T. Abbott) to come. The Prime Ministerial avenue was definitely there, in the distance, but we walked on different paths.

I'm not sure if Ballarat can be described as a 'City of Statues', as its founders dreamed in the late nineteenth century, but there is plenty of art in the Botanical Gardens. The first 12 Italian marbles were bought by Thomas Stoddart, followed by a set of five by Australian sculptor Charles Frances Summers through a bequest from James Russell Thomson. And there are others. The Summers works are in a specially built Statuary House, all centred around his Flight from Pompeii. 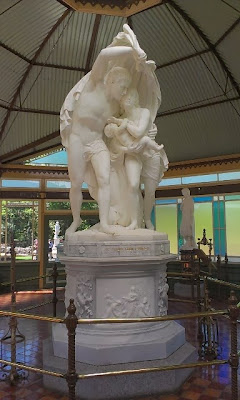 But back to botany. While the relatively new glasshouse is striking and features strongly in most of the views, the Batten Fernery is quite special. Although its origins date back to 1884, what you see today is mostly from the 1950s. The timber slats don't last long, and much of the fernery is now closed for safety reasons but this large (more than a hectare?) structure is still an impressive sight and home to a large assemblage of tree ferns and other rainforest species. A striking new shady home for these plants has been designed to concept stage, and now awaits further funding. 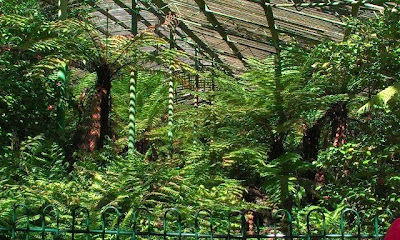 I visited in late November, as a guest of the Friends of the Ballarat Botanical Gardens. I have just recently become their Patron and this was my first visit for what must be 20 or 30 years, I enjoyed not only seeing yet another impressive regional botanic garden but (yet again) meeting such enthusiastic, knowledgeable and hospitable supporters. A master plan is in preparation and I have no doubt the Gardens will do well.
Email Post

Anna Foley, National Trust of Australia (Vic) said…
With Bendigo Botanic Gardens at White Hills also primed for rejuvenation and extension, and Mayday Hills in Beechworth about undergo redevelopment, it seems our regional gardens are setting themselves up for a Renaissance.
As some Victorian plantings mature, and in the face of a changing climate, it seems an opportune time to invest in conserving the best of their past and preparing for their bright future.
11:24 am, January 21, 2014

Talking Plants said…
Let's hope so Anna. Certainly some activity out there and a rich heritage to build on. Also plenty of enthusiasm, which is critical!
12:17 pm, January 21, 2014