Your guide to a wild botanical night out 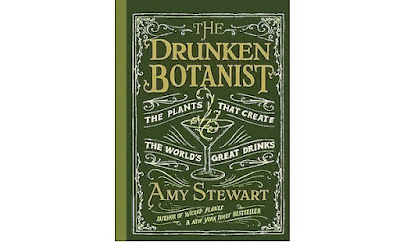 What a hoot. A brace of botanists walk into a bottle shop and gather ingredients for a fancy gin cocktail. Gin, they discover, is made of bits of conifer, some coriander seeds, citrus peel and even lavender buds. They search for real tonic water, with extract of cinchona (quinine) bark and, as they put it, Saccharum officinarum (sugar from sugar cane).

Their eyes opened, they realise the shelves are full of botanical concoctions. “This is horticulture! In all of these bottles!” From this revelationary excursion to a bottle shop in Portland Oregon, with a cacti expert from Tucsan Arizona, Amy Stewart created The Drunken Botanist and a ‘New York Times Bestseller’.

Stewart whisks us away on a breathless journey through the great, and not so great, alcoholic drinks of the world, satisfying that fundamental equation of life: carbon dioxide plus sunlight giving us sugar and oxygen, and that sugar with some yeast giving us alcoholic drinks (and I should add other subsidiary staples, such as bread and vegemite). It may sound nerdy but this is an infectious and intoxicating book.

The journey takes us from plants we turn into alcohol (grapes, barley, rice, corn and the like), to the infusions we add to some (herbs, seeds, fruit), through to the mixers (mint, lemon and for Stewart it seems, most often jalapeño). Within these three sections the plants are considered in encyclopaedic fashion, in alphabetic order.

I got enough from the first plant, in the first section, to fortify me for many a plant inspired drinking session. I guess most people know tequila and mezcal (yes, that’s how the locals spell it) come from the succulent agave. But I knew less about pulque, the poor cousin of those Mexican spirits.

Pulque is the product of a sexually frustrated agave. Agaves are sometimes called century plants, because they grow for many years without flowering, then bloom and die. They hardly live fast and die young, but in reality their life span is more like a decade than a century. Anyway, what the cunning Mexican pulque producer does is cut off the flowering stalk just as the plant readies itself for its once in a life time chance to reproduce.

After several months the base of the plant, now engorged with sap, is lanced, ‘causing its heart to rot’. The rotten insides are scraped away, irritating the plant into producing an uninterrupted flow of sap at the rate of a gallon or so a day for many months. A single plant can produce more a thousand litres before it shrivels and dies.  All very anthropomorphic, but also very evocative and memorable.

Pulque is apparently not very nice to drink and rather low in alcohol (4-6 percent by volume). ‘There are no dead dogs, nor a bomb, that can clear a path as well as the smell of pulque’ according to the sixteenth century historian Francisco López de Gómara quoted by Stewart. It seems to be making a comeback in modern Mexico, although not yet competing beer, that country’s best selling beverage.

And that’s not the end of the entry for agave. We learn of Pechuga Mezcal which is allowed to infuse over a raw chicken breast to balance the sweetness of added local fruit. Stewart recommends this one, and any tequila or mezcal made from 100% agave. Do avoid the mixtos, she says, which are made from a mix of agave and other sugars.

And so to B for barley... This book is a fascinating and stimulating romp through the plant world, using brewed beverages as hook. And hooked you will be. The book is beautifully produced and bound, like an old-fashioned compendium or almanac. The writing is racy but well-grounded. Alongside tales of discovery and inebriation, you get shots of horticultural advice and explications on botanical nomenclature, all laced with plenty of cultural and natural history.

Taking a few more sips from The Drunken Botanist, I learn about the beneficial chemistry of adding a few drops of water to your whiskey (and why it’s not, in some cases, whisky); the truth about absinthe; how monkey puzzle seeds can be brewed, chewed and spat to create mudai; plus recipes for Prickly Pear Sangria, Bison Grass Cocktail and the Perfect Pastis (ingredients: 1 plane ticket to Paris, 1 summer afternoon and 1 sidewalk café). There is even a shout out for the one of the tools of my trade, the International Plant Names Index!

With over 160 plants probed and exposed, Stewart does well to cover most of our favourite tipples. That said, I was little disappointed that cloudberry didn’t make the cut. “Rare berries, gently ripened by long, light summer days and freshened by autumn mists are handpicked from the untamed Arctic wilderness to make Lapponia liqueurs” proclaimed the label on the back of the bottle I left in my last house. You know an alcohol drink is suspect when your son’s friend, an aficionado of the goon, happily passes on this duty free gift to you nearly full. Let’s just say it has a lingering pallet, and goes well with The Brothers Karamazov, by Fyodor Dostoevsky, where it is name checked a couple of times.

I’m sure it’s bad form to write a review when you are only part way through a book but I’m an advocate for responsible reading. In this case I want to savour the pleasure, prizing this book open with pot of brewed barley or flute of the very best fermented grapes. It’s the perfect companion, along with my wife Lynda, to take on my next visit to a pub, café or botanical bottle shop. 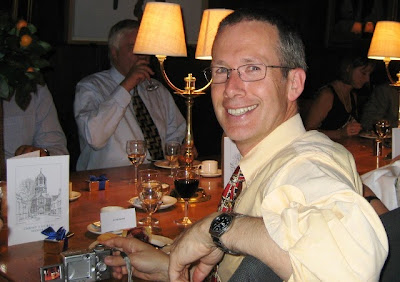 Review of: The Drunken Botanist: the plants that create the world’s great drinks, by Amy Stewart, Algonquin Books, [$36.99]. This is a lightly modified version of a review published a few days ago in the Australian Systematic Botany Society Newsletter (issue 156). The picture of the end is of a tipsy botanist at Oxford University a few years back.
Email Post

Bort said…
Sometimes at lunch our lab plays "what families are in your salad". Horribly bad for any social credibility at large, but amusing enough if the conversation is flagging or someone has turned up with capers and nasturtium. Even lettuce is a challenge for young players.
12:23 am, October 22, 2013

Talking Plants said…
Yes a wee bit nerdy but a fascinating game to play - particularly if you have beer and crisps and the like!
4:39 am, October 22, 2013