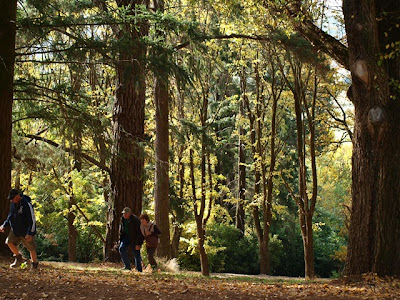 Festooned with cacti and succulents, its crater brimming with water, William Guilfoyle's mock volcano sits inactive in the south-east corner of Melbourne's Royal Botanic Gardens. A beautiful addition to a beautiful botanic garden. A hundred kilometres away, in Daylesford, there is a botanic garden wrapped around the real thing.

What might be called Mueller's volcano is covered in pines and other northern hemisphere trees. This long extinct volcano, is home to the Wombat Hill Botanic Gardens.

The tree collection is impressive. Lots of old and majestic specimens, particularly conifers, and even more particularly Douglas Firs, of which there are 250 or more. There are plenty of significant trees, with a capital (i.e. National Trust listed) or small 's'. The bough of this one cross the path to Wombat Hill House. 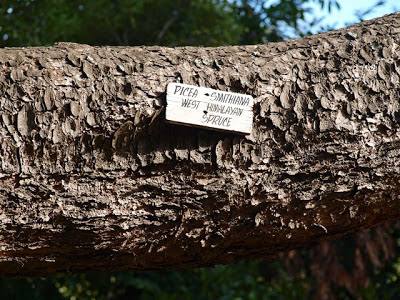 This botanic garden is part of the 'Victorian' Victorian legacy. As I mentioned in my recent Castlemainia post, according to Gwen Pascoe's Long Views and Short Vistas (2012), 45 botanic gardens were established in Victoria between 1846 and 1888.

The Daylesford garden was established in 1860 but formally opened three years later with a procession from the middle of town and (as in Taradale and Castlemaine) the planting of trees to celebrate the wedding of Prince of Wales to Princess Alexandra. Oaks in this case. 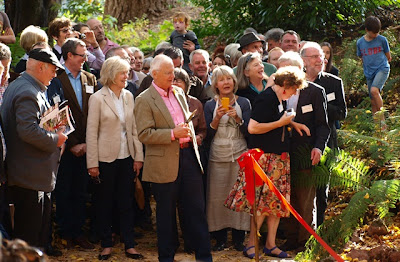 The only part of Sangster's plan remaining today is the fern gully, appropriately the focus of the event I attended on 11th of May. Along with a brass band and country afternoon tea, the Governor of Victoria, His Excellency Alex Chernov and wife Elizabeth Chernov open a new Cascade and refreshed landscape in the Fern Gully. It was a celebration of 150 years and the start of a rejuvenation of the botanic garden.

It's a great setting for a botanic garden. The tin-covered reservoir on top I could do without (aesthetically) but the rest of the volcano gives a unique character to the garden. The cafe at Wombat Hill House has great food and the staff and Friends charming. As for Mueller's trees... Well, on a sunny autumn day they and the later additions dazzled.

Like Melbourne and Sydney botanic gardens the Wombat Hill Botanic Gardens have their animal friends. The statue you'll recognise, even from its back, and the mock birds were charming powerful owls for the day. 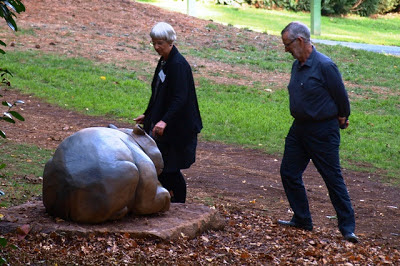 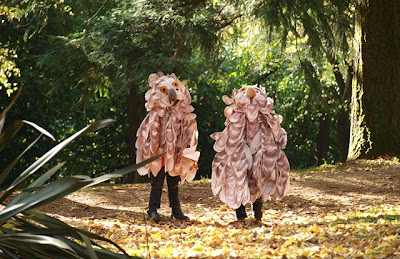 And through the trees you can see the Midlands of Victoria. There is a lot to like about this botanic garden. 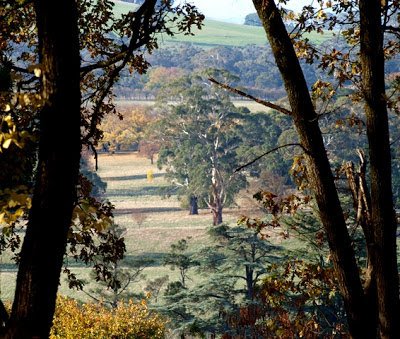 Dan Murphy said…
Tim, I agree it is a beautiful garden. Also has a nice tuberous Begonia collection. I don't think they anticipated the sheer size the surrounding trees would grow to when they built the observation tower though!

Anonymous said…
The Daylesford Botanic Garden on Wombat Hill is the gorgeous product of von Mueller's tree donations, the detailed 1884 design by William Sangster and it being enacted to his satisfaction by gardener/curator William Gascoigne. By the end of the 1880s he'd rearranges paths and built the Fern Gully & Rustic Cascade.
Visitors love the tall trees they 'don't see anywhere else'. Kids like rolling down the banks. And the best outward views are on the Wildwoods walk, Dan.
4:22 pm, May 23, 2013

Unknown said…
your blog is excellent....I really liked your blog, appreciate the great information about Gardening toowoomba.
8:04 pm, May 30, 2013