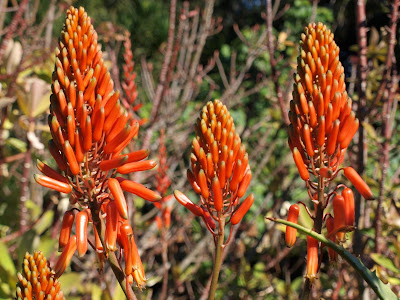 In a cowboy film shot in Mexico, you’d expect to see a few cacti in the background. But if you see anything looking like a cactus in a spaghetti western – mostly shot in mainland Spain, but sometimes the Canary Islands or Africa – it will be a euphorbia, not a true cactus.

Cacti and succulent euphorbias don’t grow together in nature, but the great thing about a garden is you can grow them side by side.

Cacti are only found naturally in North and South America, with some spread in more recent times to places like India, Africa and in the case of Prickly Pear, Australia.

The euphorbia’s family is much more widespread, but the succulent ‘cacti-like’ euphorbias are mostly from South Africa. Euphorbia’s exude a white, poisonous milk that protects them from insect and animal grazing in their native habitat, and the flowers are simple without the showy petals of the cactus (although sometimes with colourful bracts).

This is a good example of how the environment, in this case a hot, dry climate – results in similar adaptations. This is sometimes called convergent evolution, where things with quite different ancestors end up looking similar (e.g. the dolphin and the shark).

In this case, the cacti and some Euphorbia’s have become stout and fleshy, with a tough outer skin, all to reduce evaporation. There are plenty more of these ‘succulents’, including a nice geographic analogue with agaves and aloes, with their rosettes of chunky leaves.

The agave grow in the deserts of Mexico and Central America with the cacti. Their leaves are very stringy inside – these fibres have been used to make ropes. The spines are sharp.

An agave plant flowers only once, then it will gradually die. As it dies, a sucker or a new plant will be produced from its stem. The giant Century Plant (Agave americana) is a good example, although it tends to flower in 25 rather than 100 years.

The aloe shares the African continent with the succulent Euphorbia’s, particularly in the south provinces. If you break open an Aloe leaf you’ll find a jell-like flesh and yellow sap. The spines, if present, generally won’t break the skin. Aloes flower seasonally, mostly in late winter through to spring, but with some occasional flowers year-round.

By the way, the sweet juice of some agaves is used to produce a kind of wine called ‘pulque’, or distilled to make ‘tequila’, while the juice of the aloe contains a purgative and was once thickened into a brown resin for use in embalming.

There are lots of other plant families with some or many species succulent, such as the stone plants and pigface (in the Aizoaceae family, with their daisy-like flowers but unrelated to the daisy family), gasterias and haworthias (in the aloe family), and stapelias (Ascelipidaceae, the milkweed family).

Image: An aloe in flower, in winter, in the Cacti & Succulent Garden at Sydney's Royal Botanic Gardens. *From the Radio Archive (July 2007).
Email Post