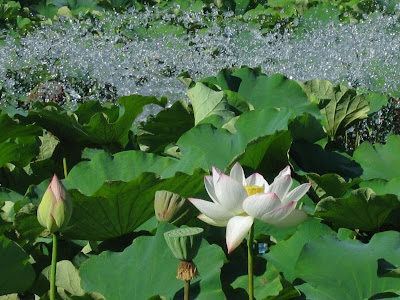 It's lotus time at the Royal Botanic Gardens. The flowers of the lotus (Nelumbo nucifera) have to be one of the most attractive and cheery blooms in the world. The large pink or pink-tinged petals fall away from that green salt-and-pepper shaker (the one you find floating in your Chinese broth), all against the backdrop of the large water-repelling leaves competing for space in our Lotus Pond.
This year we've added an extra dimension to the display by partnering with the Gardens and Cosmos exhibition (Royal Paintings of Jodhpur) at the Art Gallery of New South Wales. You can enjoy a 'divine landscape', a self-guided walk including the beautiful lotus over the next couple of months, and in January we have something for kids as well.
There are plenty of links between the lotus flower and religion, but best I stick to science. Every time I mention the lotus I talk about the 'lotus effect', so... In a wonderful book called Wildsolutions (Yale Press, 2004) by Andy Beattie at Macquarie Uni, Paul Ehrlich in the US and illustrated by Chris Turnbill, also from Macquarie Uni, the authors talk about the discovery of what is now trademarked as the Lotus Effect.
You may have already noticed that water doesn’t adhere to most leaf surfaces – it forms drops that roll off the leaf (and hopefully onto the ground for the roots to take up). Not only water, but even honey or glue won't stick to a Lotus leaf. Dirt and fungal spores also don’t attach and when a drop of water rolls around the leaf it picks up the debri and effectively cleans the leaf surface. So a Lotus leaf is always dry and clean.
The way this works is that the leaf surface is covered in a very rough surface of tiny wax particles (as small as a thousandth of a millimetre in diameter) and everything that tries to settle on the leaf is repelled by the wax. Apparently, a ‘wettable’ surface can be made more wettable by making it rougher, an ‘unwettable’ surface, of wax or similar, can be made more unwettable by minute roughening (which means even less contact between the water and the surface so the water drop rolls off). Sorry if this sounds a bit like Donald Rumsfeld's known unknowns.
Back in 2004 at least, Professor Barthlott and a team in Bonn, Germany, were developing a range of self cleaning and dirt resistant surfaces based on this principle. For example roof tiles and paints, or even a variation on this idea for coating lenses.
For more stories about the lotus look up the links above and come along to our lotus walks and events. You know its summer in anyone's seasonal system when the lotus blooms.
Image: Lotus from last year's summer display in the Royal Botanic Gardens in Sydney. That's water from our fountain in the background but I like to think it's water being repelled from the leaves!
Email Post