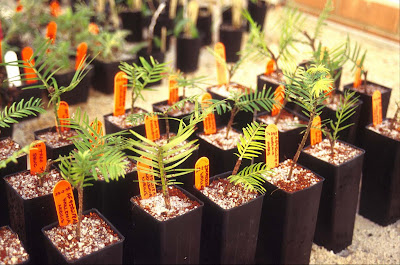 Plants are as hip and cool as animals. It goes without saying really. We now know that at least some plants can recognise their brothers and sisters, and it might be worth planting siblings together for a mass flower show.

We already knew plants moved (albeit usually a little slower than most animals and usually attached at one end), reproduced (that’s what flowers are for!), counted (sort of, and only up to two…the Venus Fly Trap responds to the second contact with one of its sensitive hairs…) and communicated with each other.

It’s been long known, for example, that plants communicate through releasing chemicals that are toxic to other species, and through various colours and displays to attract pollinators and seed dispersers.

Some intriguing research from the University of Deleware, in the US, found that plants can also recognise their brothers and sisters. They started work on a plant called the Sea Rocket (Cakile – a common weed on Australian shores). When you grow seed from the one batch together, the siblings don’t send out roots to compete with each other.

If you throw in seed from a different parent, it each seedling for itself!

This they found out in 2007. The next step was to find out how a plant could do this. Except for potatoes and corn, they don’t have eyes or ears (sorry).

For this work they turned to the fruit-fly of the plant world, Arabidopsis – actually a close relative of the Sea Rocket (they are in same ‘plant family’).

The researchers collected wild plants to avoid contamination of their study plants from various close and distant relatives of the laboratory-bred forms.

It’s not clear to me whether the signal chemical inhibits or encourages growth, or both. It’s all relative I guess.

The siblings also grew more strongly above the ground, at least in the seedling stage, because they spent less energy on root growth. They also tended to have shallower roots.

The research has implications in agriculture and horticulture, wherever we have a single species grown en masse – a monoculture. In our home gardens, maybe we could get plants to grow better together if they are all from the same parent.
Image: Seedlings of Wollemi Pine at Mount Annan Botanic Garden, perhaps desperately trying to communicate with each other...
Email Post

javgarden said…
Heavily impressed with you babi wollemis. Writing from Spain, please, how/where did you find seeds?
Let me know, at the moment an australian friend working with me in Spain, maybe we can arrango.

Talking Plants said…
Thanks! I'll get someone from the Botanic Gardens to email you direct with advice about how to get Wollemi Pines in Europe.
Tim
7:40 am, December 16, 2010