This is not a turpentine bush 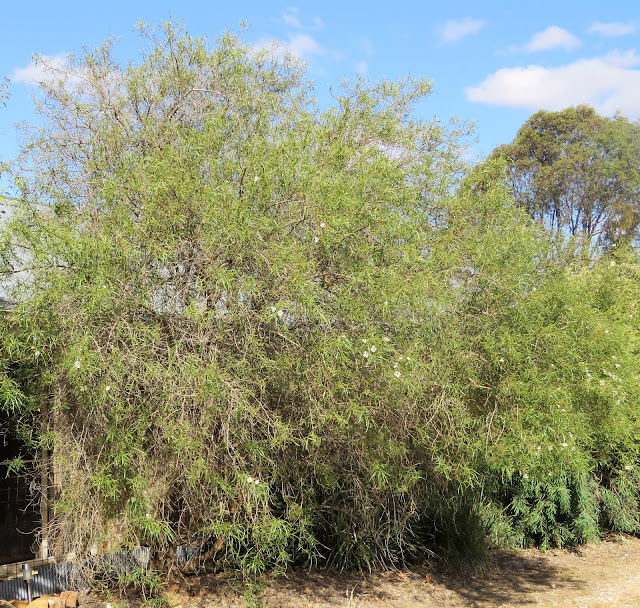 I thought I had captured one of the Eremophila Turpentine Bushes, when I was photographically browsing in Wesley Hill, on the outskirts of Castlemaine. There were a couple of small trees, planted alongside the hotel in which we stayed back in early December (in happier, coronavirus-free days), looking out over an old gold mining reserve. 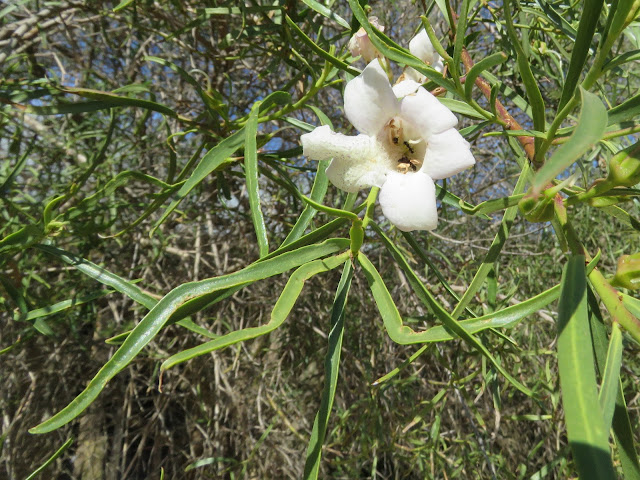 Plants usually are called turpentine this and that when their foilage smells like turpentine, which usually comes from a pine tree and is therefore 'piney'. They tend to be resinous, like pine sap.

My plant seemed a little resinous but not piney, so I had to test my identification skills a little harder (using, e.g., the interactive and indented keys in VicFlora, hoping it might be a Victorian native). I ended up with Eremophila bignoniiflora, which was pleasing. The name implies flower like those of Bignonia, which these plants have.

The leaves seem about the right shape, length and width. 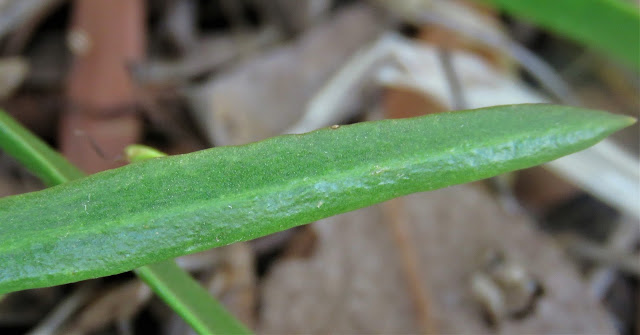 The flowers have four stamens (the male bits, bearing the pollen), the flowers are spotty and cream-coloured and have the right kind of divided lobes, and the pointy green 'sepals' overlap a a bit at their base. 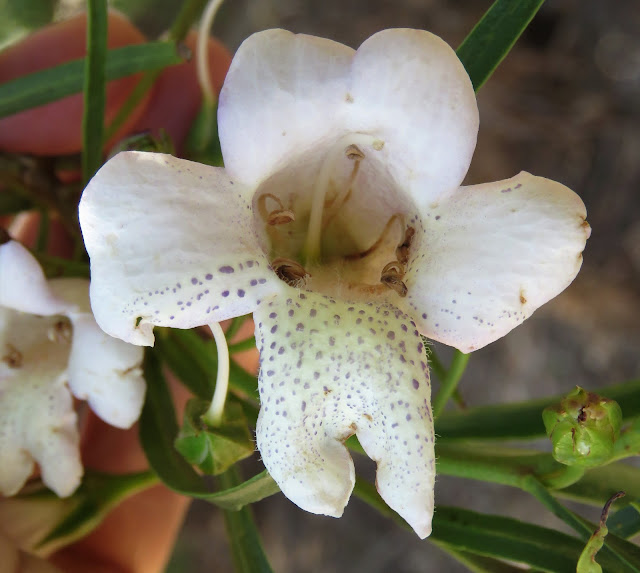 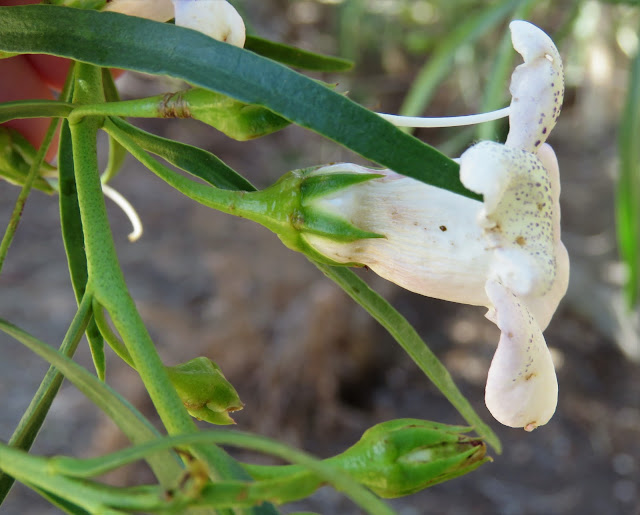 And the fruits are dry not fleshy. 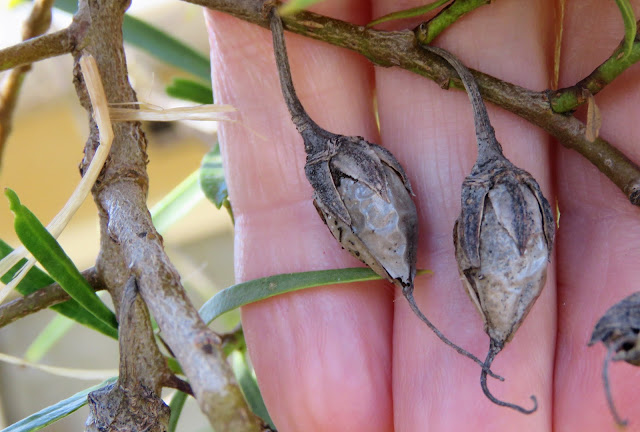 All matching the description of Eremophila bignoniiflora. And I have pretty much every aspect of the plant captured in my photos, right down to these fine hairs inside the spotty flowers, again typical of this species 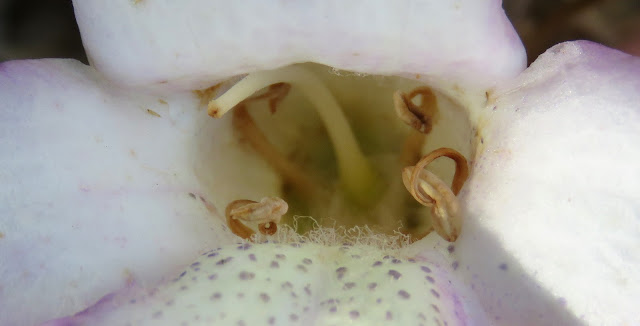 If I'm right, this is a species that grows widely across northern and eastern inland Australia. It has a unexciting common name Bignonia Emu-bush, as well as a number of names in various Indigenous languages across its range, such as Eurah in parts of New South Wales.

But I was still worried. I see Eremophila polyclada is similar. And worse still, that it forms hybrids with Eremophila bignoniiflora! Well, the leaves of that species seems shorter and the flowers more pinkish. Plus it has a 'divaricate' habit, meaning the branches head off at almost right angles giving the plant a tangled and awkward habit.

Not sure about that last bit. Look at this one... 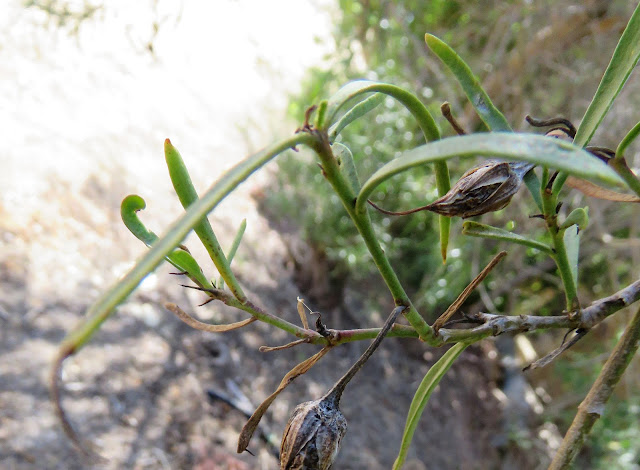 And of course it might not even be from Victoria. It was planted after all!

As with a medical, engineering or mechanical problem, go ask an expert. Neville Walsh is my go-to botanist for the Victoria flora, although we do have some other excellent field botanists in our Plant Identification section. Neville just happens to have an office near me and he is used to me bugging him with this kind of thing, ever since we worked together editing the Flora of Victoria (where he was the one that knew stuff and I was one that was learning it, which works pretty well when you are editing and writing something for people with a wide range of experience and expertise...).

Anyway, back to my plant. Neville concurs with the Eremophila bignoniiflora due what he describes as its 'loose boofy habit' and the largish leaves. Flower colour is pretty good too.

Neville is familiar with the hybrid between Eremophila polyclada and Eremophila bignoniiflora, which in his experience has flowers not unlike the ones I've photographed but a more 'contained' habit.

So, Bignonia Emu-bush it is. You might call it the Creek Wilga or Dogwood, or in Western Australia Gooramurra, but never a Turpentine Bush.
Email Post
Reactions: