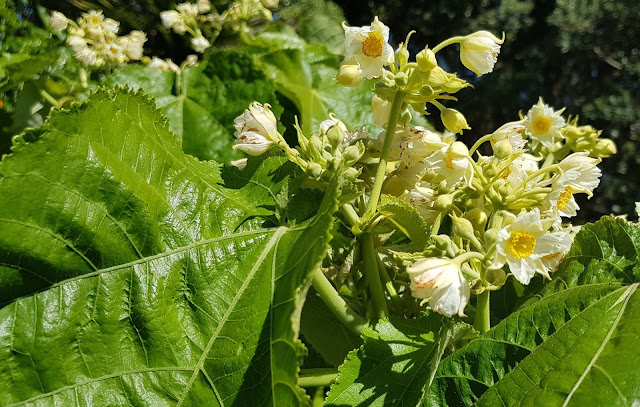 In my final in this miniseries on New Zealand plants, let me introduce you to the Whau. Pronounced something like 'fower' rather than 'wow', making the phrase 'Whau flower' sound awkward and certainly less dramatic than if you misprounced the name*.

In any case, the Whau flower is largely white with an almost daffodil-like inner ring of yellow male parts. 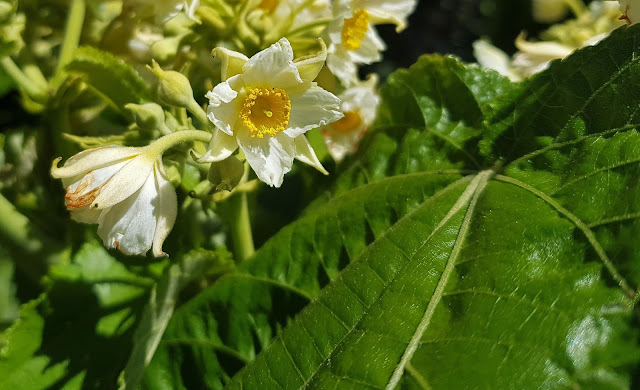 The leaf has been described as like that of a lime, or Tilia, giving rise to another common name, the Evergreen Lime. The Maori name, Whau, is thought to be from a Polynesian word for the hibiscus, another plant with sometimes similar leaves.

Both comparisons make sense. The Whau is classified in the broadly conceived plant family Malvaceae which these days includes both the lime and the hibiscus.

In Australia (and sometimes in New Zealand according my friendly and observant reader, Stuart Reed) we call it the Corkwood, or Cork Tree. Our recently retired horticultural botanist, Roger Spencer, describes the wood as soft and light, about half the weight of cork from the Cork Oak. He says it was used by Maori for fishing net floats.

And its botanical name is Entelea arborescens. The second part of that name tells you its a tree, or at least tree-like. The first bit, that each flower has both male and female parts, or perhaps that all the stamens are functional ('perfect').

None of which highlights the distinctively spiny fruit; not present on the plants I saw in Wellington in October, but here on a plant photographed in Auckland by Krzysztof Ziarnek**. 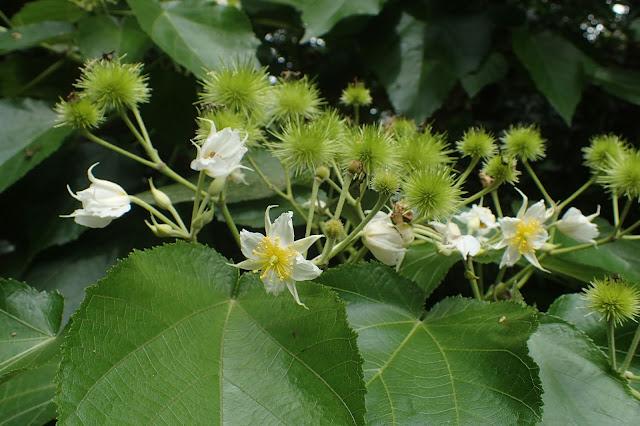 This is a single species genus (which we call monotypic), only found in New Zealand, from Three Kings Islands through North Island to the northern tip of South Island. And never more than 8 kilometres from the sea. However it is grown in New Zealand gardens and has escaped and become established in some area outside this 'natural' range.

Whau grows best in strong sunlight, of the kind available when coastal forest is cleared and in other disturbed areas. Lauri Millener from Auckland University College describes it as a fast-growing opportunist, dominating only until shaded out. 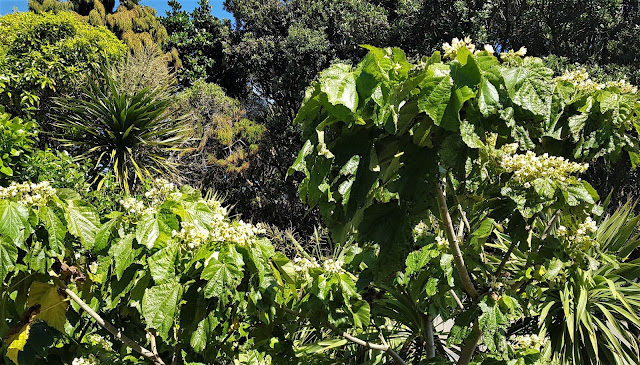 It's a good early coloniser, or weed, depending on your perspective. Millener documents extremely high seed production, particularly when the plant is under stress. He says a dying tree in a private garden in Auckland produced over one million seeds in a single year. These seed can germinate once released from the capsules or stay dormant in the soil of 'many years'.

Its Achilles heal  is, apparently, an intolerance to 'even moderate cold, strong wind'. Which is odd given the plants I saw were thriving in middle of (windy) Wellington. Let's put that down to clever horticulture, including the selection of a sunny but protected nook. 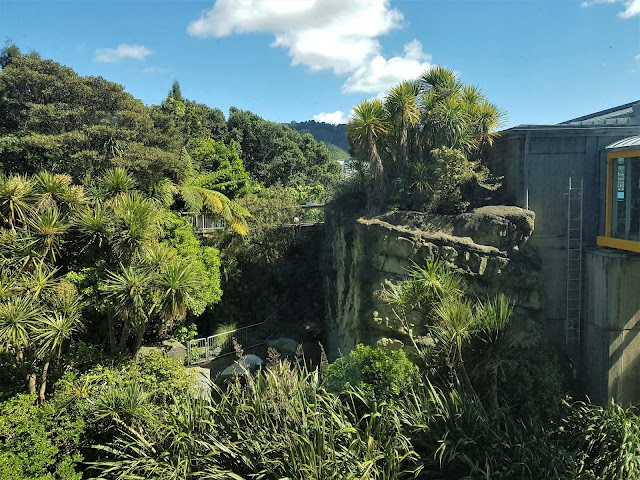 * In response to this being posted on my Facebook page I received the following further advice about pronunciation of the name from Arapita Tatiman (thanks!): "Whau by the way is pronounced by northern Maori more like 'Fow', the 'Wh' is a 'F' sound, and the 'au' is an 'ow' sound. Phonetically similar to Fau and 'Au (Hibiscus tiliaceus) a plant with superifically similar leaves". Arapita Tatiman also notes that "both Entelea and Hibiscus tiliaceus were used by Polynesians for the light timber (as floats), the leaves as medicine, for wrapping food etc and a handy plate, and Hibiscus certainly for cordage".
**Images: My pictures taken in the native plant garden at Te Papa Museum in October 2019, except for picture of the immature fruits, which is from Wikimedia Commons, photographed at Auckland Botanic Gardens on 11 November 2017 by Krzysztof Ziarnek.
Email Post
Reactions:

Stuart Read said…
Thanks and good one, Tim - cork tree is a common NZ common name too - not just Australian. Malvaceae family is not in strong supply in NZ flora - this one is the most prominent - Hibiscus spp. contribute a few smaller straggly shrubs. Less so than in Australian flora. Just that bit more 'sub/tropical' here, which seems to suit that family better... Kia kaha, Stuart
9:56 am, February 04, 2020

Talking Plants said…
Good re Cork Tree in NZ. I'll add a note about that. Somebody notes on Twitter that they were surprised such a tree would survive in windy Wellington, which may be why some of the less sturdy Malvaceae grow on the islands? Perhaps.

Stuart Read said…
Beaut. As to Wellington's winds, they're over-stated and under-thought, in my view. Dominant winds are northerlies and southerlies - so your aspect, surrounding hills; prospect (open harbour / blocking forests / sieving high rise) make for deflections and gaps in 'application' - in short, not all Wellington gets all winds, always - hardly rocket science but I'm sure sheltered spots (as you mention), edge conditions (which seem to suit pioneers such as this) and what direction they face, all play some part in 'survival', let alone thriving/not. Islands of course are far more exposed, and mountainous ones (my brother just sent me a shot (at last) of vertical rock cliffs on the Three Kings Is. with Xeronema callistemon clumps in the wild - magic!] obviously would be vulnerable to all winds with less 'places to hide'. Wellington's basin of hills, with plenty of folds, twists (tectonic/physical) mean plenty of places to hide. Different scenario, I suggest!
8:02 pm, February 04, 2020

Talking Plants said…
Back to the drawing board on that then, or to a few post-graduate research studies. It's a unsatisfying business running through alternative evolutionary histories in this way of course - too many competing historical v. comtemporary influences. Still, curious.