Daintree sheoak not so swishy 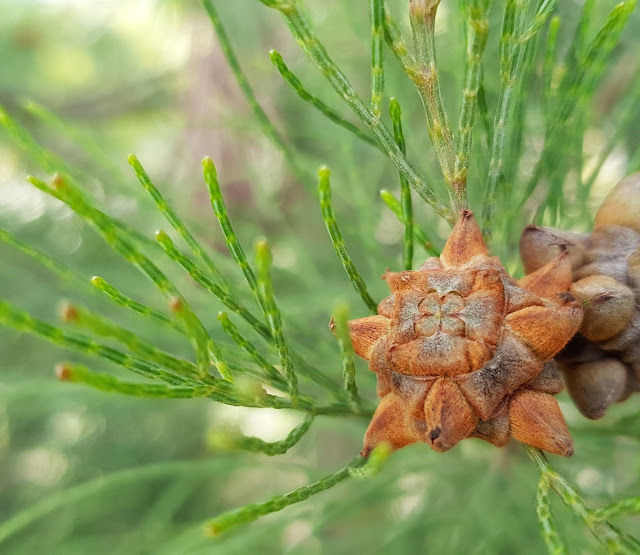 We all know sheoaks, and their needle-like branches that amplify the wind to create a lovely whispering, swishing or even whisling sound.

Some of us also know the ignobility of being required to adopt a new botanical name for many of them, when the prefix Allo- was added to Casuarina to create the genus Allocasuarina.

So what about Gymnostoma, the Daintree Oak or Daintree Pine, a genus created back in 1980 but expanded in definition at the same time as Allocasuarina hit the press, just over 30 years ago? The name means naked (gymno) mouth (stoma) mouth, a reference to the exposed pores (stomata) in the groves running along each branchlet.


It gets a bit fiddly and technical to identify genera and species within the sheoak family Casuarinaceae, but broadly Gymnostoma has shallow grooves (with those exposed pores) along its fine, needle-like branchlets (the ones that for some species, swish in the wind). In the top picture and the one below, the groves are the light green stripes. 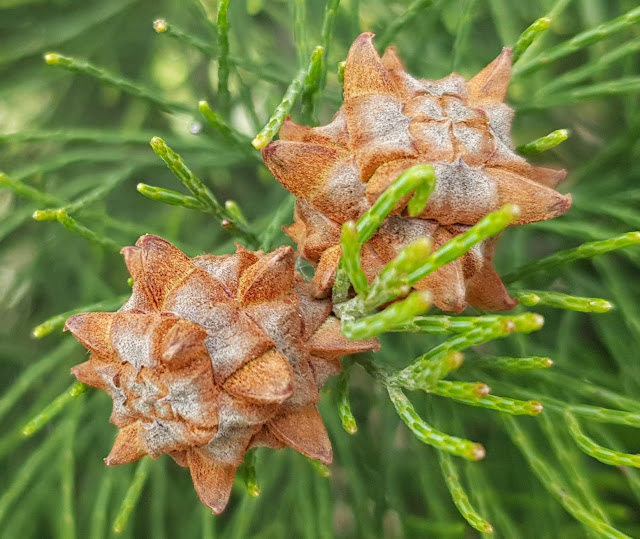 Each branchlet segment has a circle of tiny triangular teeth (tiny leaves) and in Gymnostoma there are only four, compared to up to ten or more in the other two genera. Finally, the bits between the two pairs of protruding 'valves' that contain the seed are woody, rather than papery, and push the valves apart - so you get that kind of many-horned appearrance.

Compared to some of the Casuarina and Allocasuarina species, the form of the plant is very rigid and erect, with the branchlets sitting upright. Most she-oak branchlets droop at least a little, as you can see at the end of this post. Gymnostoma looks even more like a conifer than other sheoaks, and quite like one of our native Cypress-pines (Callitris). Leading to an alternative common name, the Daintree Christmas Tree. 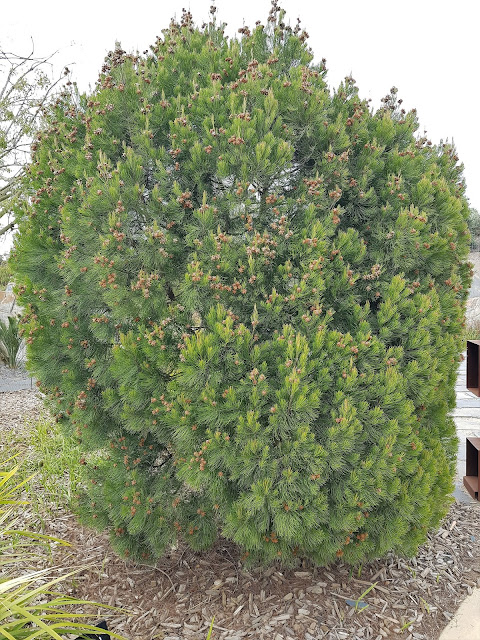 There are 18 species of Gymnostoma, extending from the islands of South-east Asia down to New Caledonia, with just one species occuring naturally in Australia. And only just. It grows naturally in a few small populations near Thornton Peak in the Daintree Forest near Port Douglas, in northern Queensland.

Unlike the other species of Gymnostoma, Gymnostoma australianum has finely hairy or pubescent mature 'cones' (the aggregate fruit) and branchlet tips. 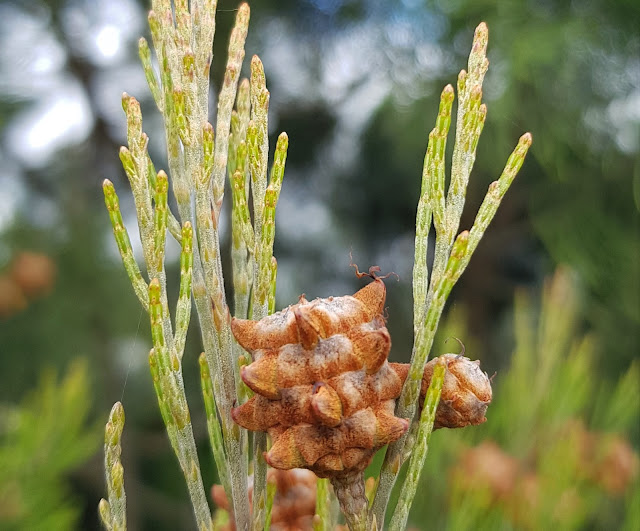 Do track down and grow Gymnostoma. Although from the hot, humid rainforest of northern Queensland it seems to cope well out in the open at Cranbourne Gardens. It only grows to 7 metres and retains its neat, compact form.

As comparison, this is Allocasuarina littoralis, Black Sheoak, from coastal eastern Australia. Note the pale green lines on the branchlets are narrower (and deeper), and the cone is more regularly packed with those valves because the bits inbetween are small and papery. Listen too when the wind swishes through those more disorganised branchlets. 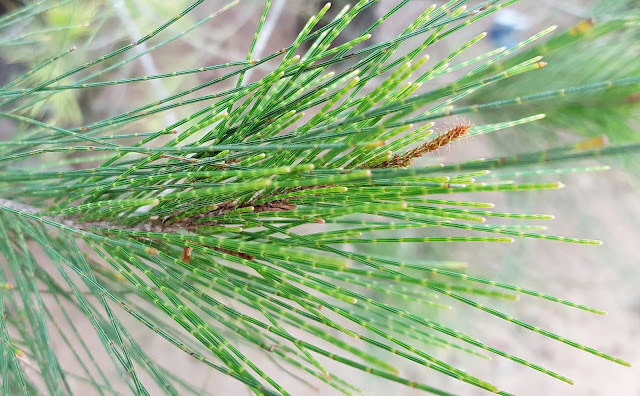 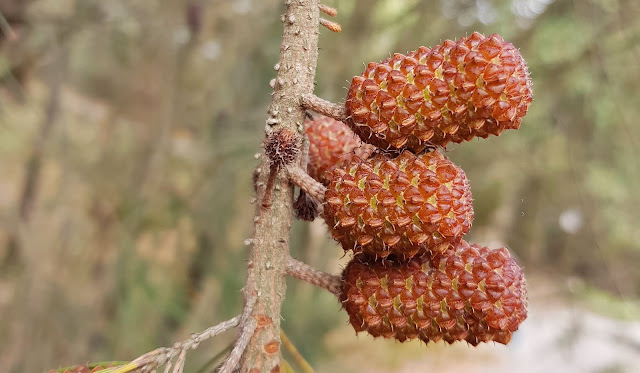 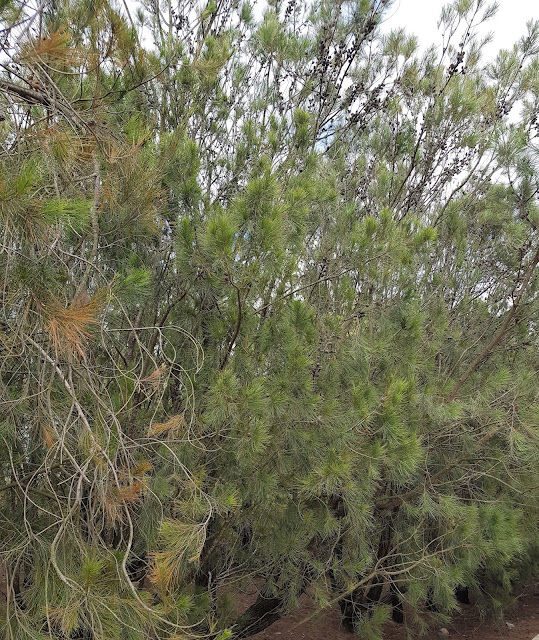 Note: There is one other genus in the Casuarinaceae, Ceuthostoma. It includes two species, both from the south-east Asian islands north of Australia. All species in the family have separate collectives (inflorescences) for male and female flower - the 'cones' illustrated here are from fertilised female flowers.
Email Post
Reactions:

Andrea Charles said…
Dear Tim, I should say that was a very commendable read. The article not only gave us readers a detailed knowledge about the Daintree Oak but also was very educative when it comes to knowing its biological name and structure. Highlighting shape, size, the the two pairs of protruding valves, etc., of Gymnostoma along with its comparison to other Casuarina and Allocasuarina species was spectacular.
6:36 pm, March 03, 2020