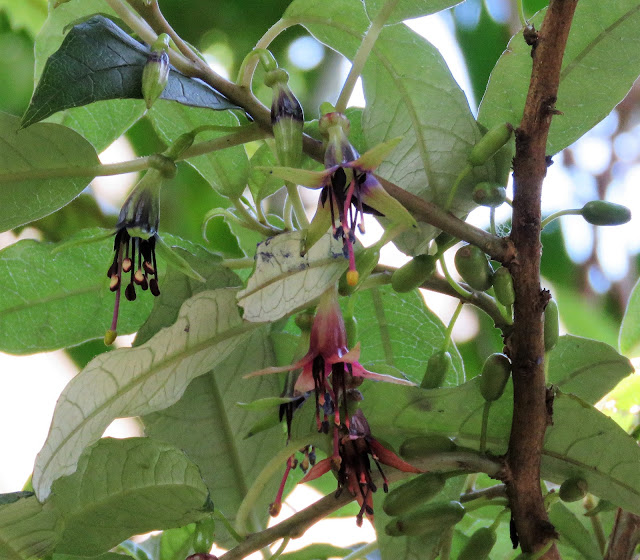 Reaching up to 12 metres high, New Zealand's Tree Fuchsia is the world's largest Fuchsia. Most of the other 100 or so species, predominantly from the Americas, are best described as shrubs or creepers. There are two other Fuchsia species in New Zealand, but they are both of a creeping, climbing form.

So the first thing you notice is the stature of the plant. 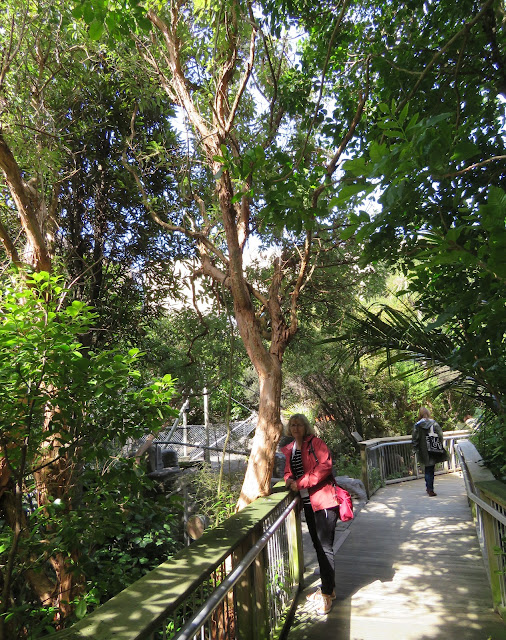 Eventually, you find the flowers or fruits. The Maori name of Kōtukutuku has a lovely bird-song quality to it when spoken aloud. A reminder, I like to think, that the nectar-rich flowers are pollinated by birds such as this Tui (below) as well as bees. 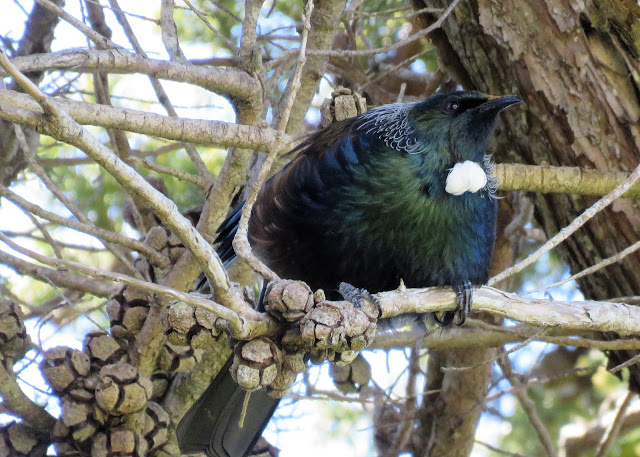 What all these names overlook is the gorgeous wine-colour of the flowers; flowers that sometimes arise abruptly from the side of the branches, a form of cauliflory. 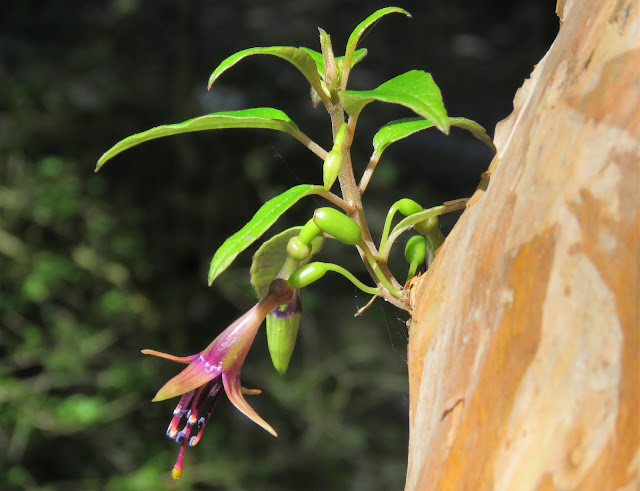 So unlike the brash mostly primary and secondary shades of garden fuchsias, such as these in Wellington Botanic Garden. 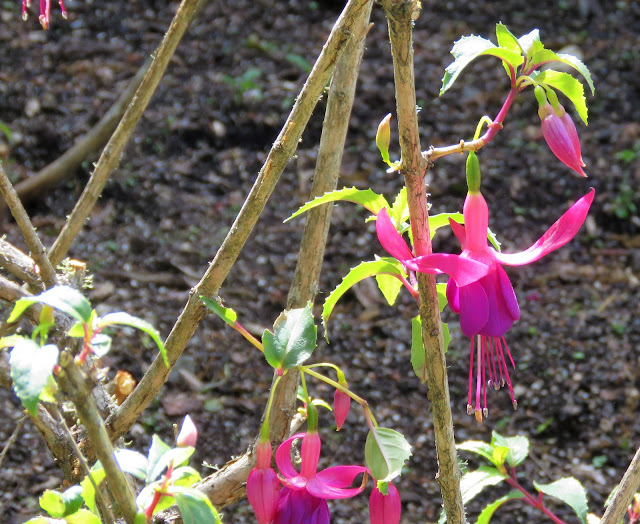 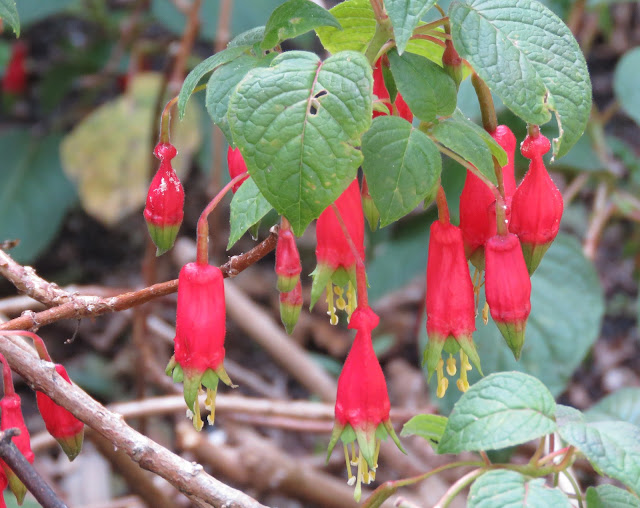 Interestingly, and perhaps due to the predilections of the local birds, the other two New Zealand Fuchsia species also have muted tones. This next image shows the flowers of the Creeping Fuchsia, from North Island. 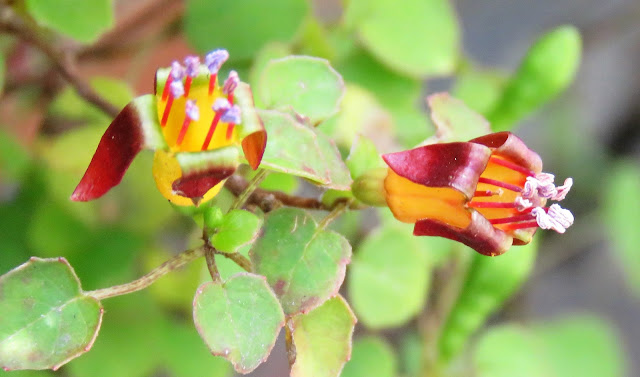 You might also notice the bluish tinge to the pollen at the end of those red filaments (the male bits of the flower). Our Tree Fuchsia also has even darker blue pollen, which ends up in bee hives and on the faces of the Tui and other pollinating birds. I gather Maori have used the blue pollen to colour their lips.

There are three different sets of male and female apparati in Tree Fuchsia flowers - with shorter or longer stalks - all assisting the flower to achieve cross-pollination (which as I've mentioned before is generally a good thing in an evolutionary sense). The sweet and tasty berries are produced mostly from flowers with long styles - that yellow-knobbed bit extending beyond the blue-tipped stalks in the picture below. 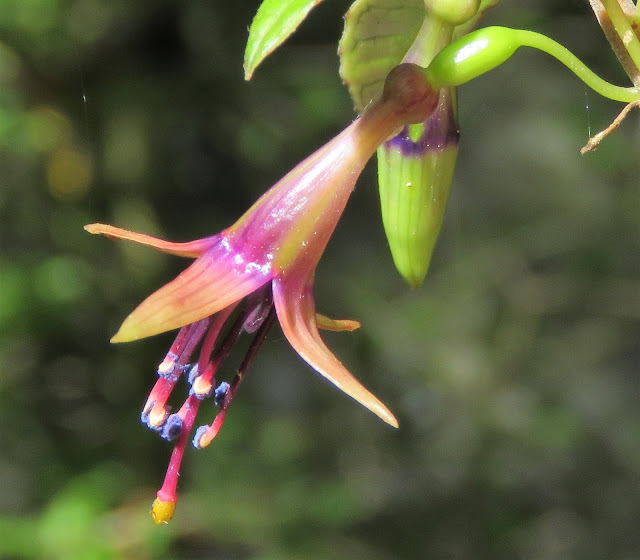 Finally, the leaves. In the colder south of New Zealand the Tree Fuchsia is deciduous, one of the few pre-settlement trees in the country to lose it leaves seasonally. If that happens, the flowers can appear before the leaves. In Wellington, both leaves and flowers were present during my visit in October and I expect the leaves remain all year. 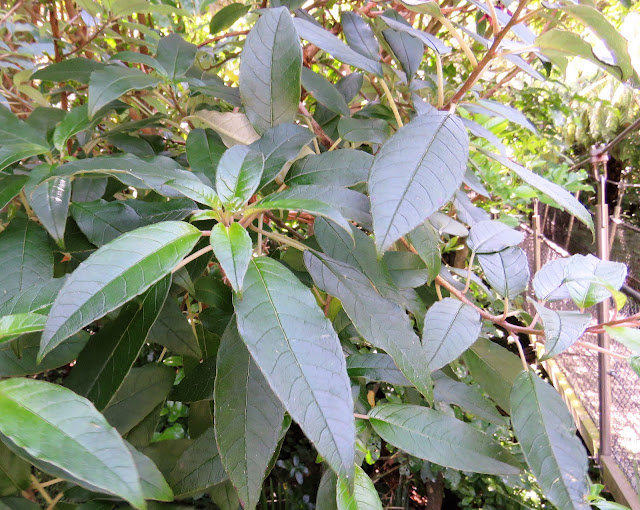 Unless there an Australian possum in the vicinity. These much unloved immigrants to New Zealand have been known to strip a Tree Fuschia of all its (apparently sweet and tasty to humans as well) purple berries and leaves.

Images: Fuchsia excorticata from the lovely garden within Te Papa Museum in Wellington, the others from the fuchsia collection planted along the lower wall of Wellington Botanic Garden. The Tui was in a tree near the top of Mount Victoria.
Email Post
Reactions: