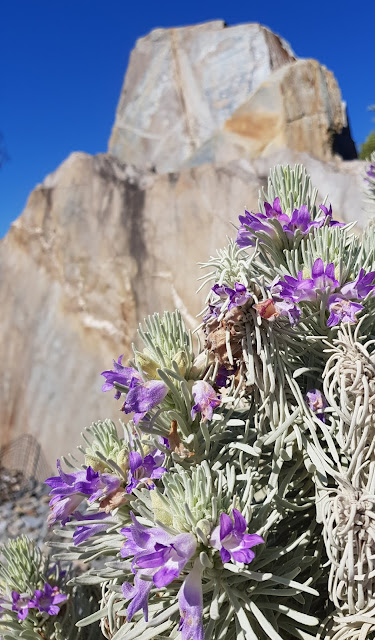 While we are in the Weird and Wonderful Garden (see last week's post), this emu bush is worth a mention. It's the the Spaghetti Eremophila, sporting a tangle of perhaps pasta-like leaves. As Norma Boschen and co-authors describe it, giving it the overall look of a 'shaggy sheep dog'. 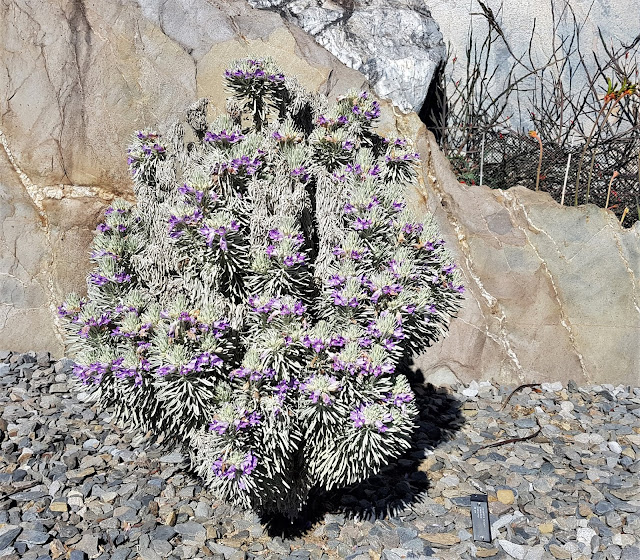 Eremophila fasciata grows naturally only among rocks in hills around Meekatharra, a small town inland of Geraldton and Carnarvon. Meekathera is a local Yamatji word for 'place of little water', and like many emu bushes, this species has hairy leaves to keep the plant cool and reduce water loss. In this case the hairs are tiny and star-shaped. 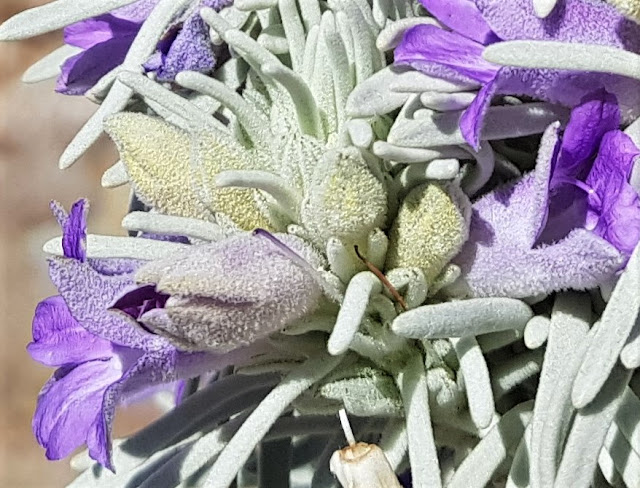 The species was formally named and described 12 years ago (after a bit of a stutter when the name was included without a description seven years earlier), although it was first collected and pressed in a herbarium over 60 years ago.

The author of the name, South Australian botanist Bob Chinnock, has described 140 new species of Eremophila since the 1970s, bringing the total number of species to just over 200. All but one (which extends to New Zealand) found only in Australia.

By 1990 the first located population of the Spaghetti Eremophila was in decline due to goat grazing, with those plants protected under shrubs surviving best. Despite this, it is considered 'poorly known' and 'not under imminent threat'. 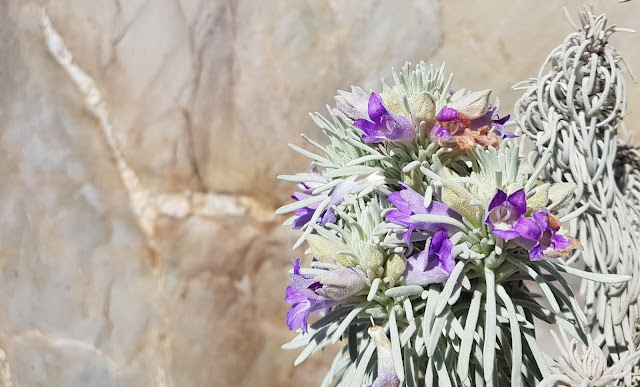 The name 'fasciata' doesn't refer to the bundles of long (spaghetti-like...) leaves but to the clusters of flowers at the tips of the branches. Fasciate usually means flattened, although sometimes, as in this case, botanists use the term to mean bundled together and looking like they come from a common point. I prefer the term fastigiate for that use, but there you go.

The specimen photographed here is presumably grafted onto the related genus Myoporum, as are most Eremophila in cultivation these days. Like many plants in this collection at Cranbourne Gardens, it benefits from careful placement among the heat-storing rocks. Apart from some good irrigation when it needs it, just like home!

In fact it turns to out to a be a good tough plant for gardens in dry areas. Just watch humidity: the crowded leaves can trap moisture, creating a home for less desirable fungi and other troublesome microorganisms. 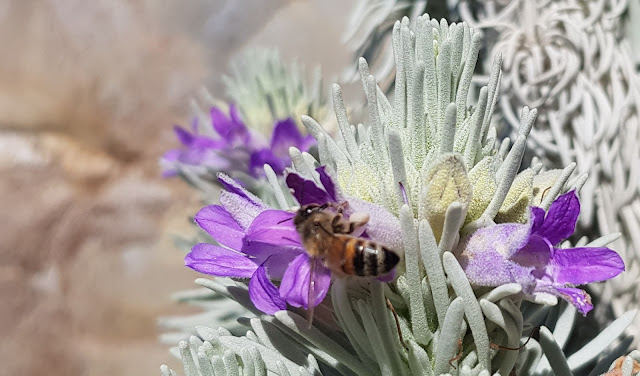 Like most emu bushes, the flowers are insect pollinated (although there are bird-pollinated emu bushes, with different shaped flowers). Of course the honey bee would not have been the traditional pollinator but I expect it does the trick.
Email Post
Reactions:

William Annie said…
I want to use this medium to testify of how i got back my ex husband after divorce, i and my husband have been married for 8 years with 2 kids, we have been a happy family. Last year his behavior towards me and the kids changed, i suspected he was meeting another woman outside out marriage, any time i confronted him, he threatened to divorce me, i did all i could to make hings right but all to no avail until i saw a post on a "love and relationship forum" about a spell caster who helps people to cast spell on marriage and relationship issues, when i contacted this spell caster via email, he helped me cast a re-union spell and my husband changed and came apologizing to me and the kids. Contact this great spell caster for your relationship or marriage issues via this email: chiefdrlucky@gmail.com or Whats App him on +2348132777335 Website : http://chiefdrluckysolutionhome.website2.me/ Good luck
4:17 am, January 22, 2020