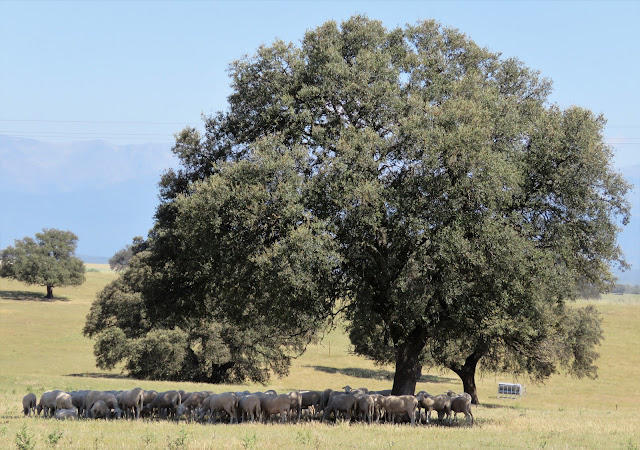 I read recently, in some book or other, about a tree called the Encina, growing in California. I gather this is what they call the Coast Live Oak. Live oaks are oaks that keep their leaves, more or less, throughout the year. That is, they are not (blatantly) deciduous.

Encina is 'American-Spanish' word that seems to have been corrupted from the Latin ilicina, a combination of ilic- (a reference to the holly genus, Ilex) and -inus (or -ine, for resembling). All that might point to it being the common name for Quercus ilex, the Holm Oak. In my naivety when reading the book, I just assumed it was a species transplanted from Europe. 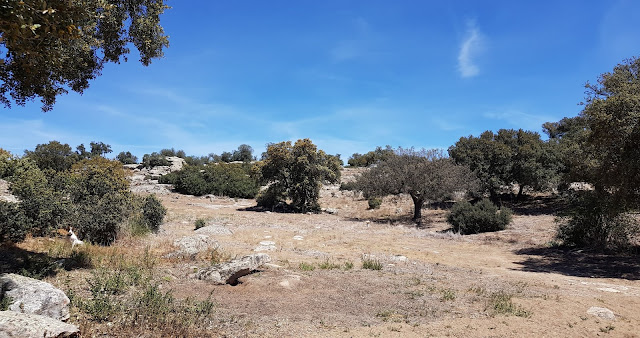 Quercus ilex is a well known tree from the Mediterranean. Landscape designer Miguel Urquijo, standing in a garden he created just out of Ávila, in northern Spain, describes the landscape around there (as you can see in the picture above) as mostly Quercus ilex, with a bit of grass and rocks. That's true for much of the (largely modified by human) landscape of Spain and Portugal. To the west of the Iberian Peninsula the Cork Oak, Quercus suber, joins the grass and rocks as a landscape partner to the Holm Oak.

But I digress. In reality, the name Encina is applied to a local species in California (and Mexico), Quercus agrifolia: agri for coarse or rough, folia for leaves. Like Quercus ilex this species has rough leaves, resembling in outline at times, those of the holly plant.

I know the Holm Oak better than the Coast Live Oak. It's a lovely tree, I think, and a species we should plant more often in Australia. Roger Spencer, in HortFlora, says Holm Oak is found in old parks and gardens in south-eastern Australia, particularly New South Wales. I gather it was popular around the turn of the 19th/20th centuries.

Holm Oak is grown widely around the world, in a variety of climates: we had a nice young specimen in our backyard when we lived in Kew Gardens, London - very popular, as it happens, with the local fox. It does suit dry, hot climates though so for southern Australia this is a good plant for a larger climate-adapting garden.

Coast Live Oak is also planted around Victoria and New South Wales, and both species can be found in Melbourne Gardens. But what I am getting around to, and what I was thinking when I read about Encina (inappropriately as it turns out), was why is the Quercus ilex called 'Holm' Oak?

While 'holm' can mean a small island in a river or lake, it is was also a Middle English word for holly. Sometimes rendered as hollen, hollin or holin, holm is yet another reference to the shape of the Quercus ilex leaves. As is the botanical species name, as is the common name for that other live oak, Quercus agrifolia. And you won't be surprised that an alternative common name for Quercus ilex is the Holly Oak... 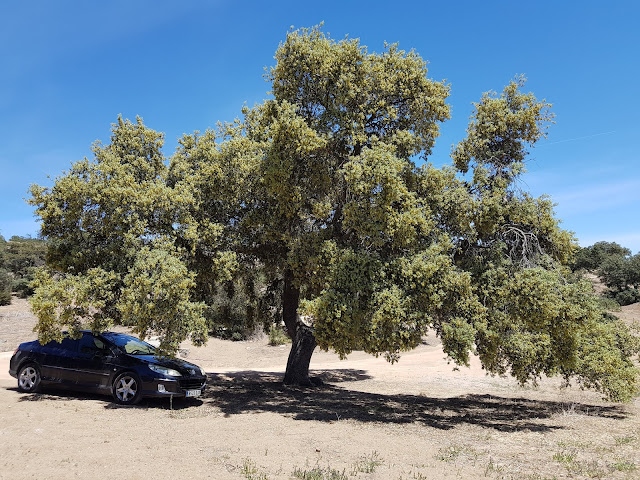 Now, the leaves of Quercus ilex are not always toothed on their edges like the holly, but then neither are all the leaves of many hollies! I read that Ancient Greeks used the leaves of the Holm/Holly Oak to tell the future and I bet, with no evidence whatsoever I should say, that it was the number and placement of teeth on the leaf edge that were used to provide alternative futures. That would give you some options.

Images: All of Holm Oaks, in Spain. The last is in full bloom, in May.
Email Post
Reactions:

How doctor olu help me to increase my penis size said…
Hello everyone, am very happy to share this little awesome testimony about Dr olu a great herbal doctor who help me enlarge my penis size.3.2 cm to 8.3 cm longer with his herbal cream mixture, my girlfriend is now so amazed with the autonomous size of my penis , if you you are also in need of help on how to enlarge your penis to become bigger and stronger I adverse you to contact Dr on his email (drolusolutionhome@gmail.com) ) you or contact on whatsapp number +2348140654426 because he is one of the best herbal doctor that i can only show you up to, if your penis is 4.2 cm and want to get it reach 9.2 cm within three weeks i Dr olu is also specialized on obey m breast and boobs enlargement i advise you to contact him for help
10:19 am, September 29, 2019

I agree holm/holly ('evergreen oak' is a useless common name - there are many evergreen species) is an excellent (I'd suggest, the best) oak species for warming, drying inland Australia - there are old ones in South Australia, Tasmania and Queensland's SE hinterland (Darling Downs) as well as NSW and Vic. I note (from www.hortuscamden.com) that it was here VERY early: