Happy 250th Birthday Kew's Ginkgo: too cultivated to show us its chi chis* 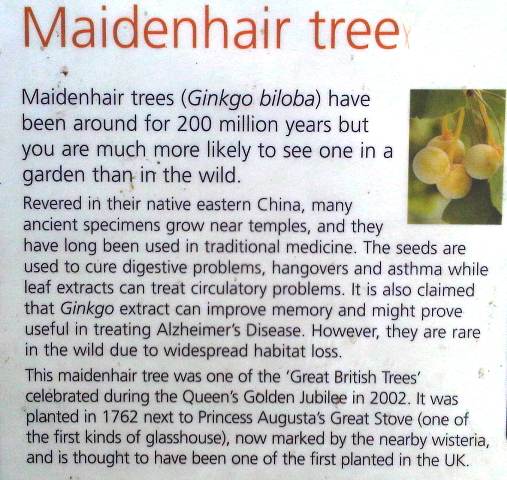 It's 6 pm on a Saturday night and I'm about to hear 'everything you ever wanted to know about Ginkgo biloba...but were afraid to ask' from Peter Del Tredici. I didn't think I'd be afraid to ask anything about ginkgos but I hadn't factored in their chi chis.

The talk is the annual Alan Mitchell Lecture and Dr Peter Del Tredici is from Arnold Arboretum in the USA. Peter has been working on ginkgos for 25 years, spending plenty of time in China where these fascinating plants have apparently survived through to modern times.

It was Peter who suggested to Kew's Head of Arboriculture, Tony Kirkham, that we celebrate the 250th anniversary of this gingko, one of our Old Lions planted in 1762 as the attested by the sign above. These are some pictures of that tree I took on my phone on the way over tonight. 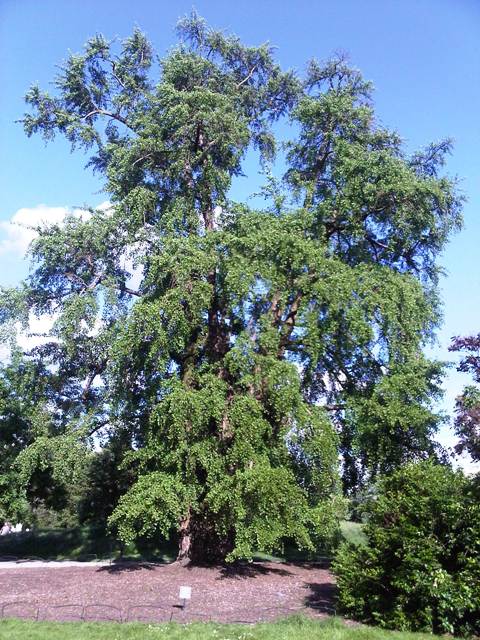 Ginkgos have angular, shaggy look with branches often heading off in different directions. That plus the shape of leaves are unmistakable. 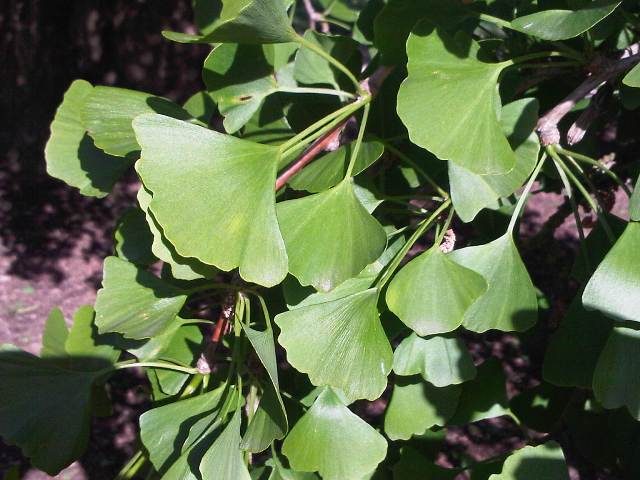 In Autumn, with the right conditions, they will keep colour for a week then drop all their leaves almost simultaneously. This is the best I could do from last year at Kew. 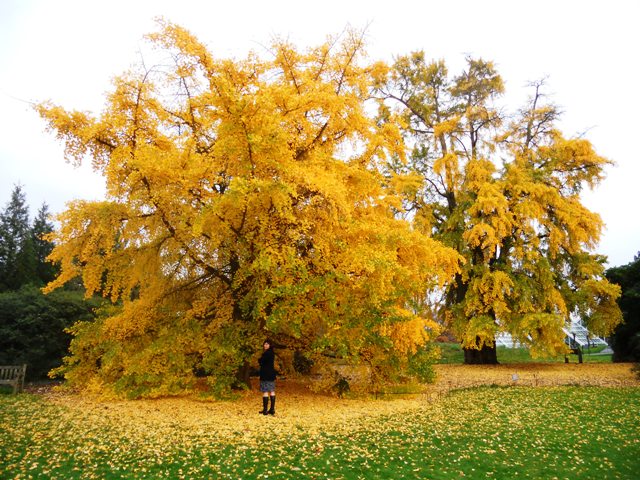 Male trees shed pollen early to mid May, drifting over to a pollination-drop on the end of the female cones. Pollen is then withdrawn into the ovule. Pollination occurs in early May, but fertilisation (fusing of the male and female bits) doesn't happen until October or November, just as fruit falling. At that time, sperm swims a few millimetres to fuse with female bit. This was first discovered in 1896, in a famous 300-year-old tree in University of Tokyo Botanical Garden.

The oldest fossil of ginkgo we know of is from 170 million years ago (Ginkgo yimaensis). There are a few other species evolving after that until we get the modern species (Ginkgo biloba) arising about 25 million years ago. Leaves became less divided over this time.

In central China there are a few trees assumed to have been grown on from remnant native trees in the area, or perhaps even still natural. The Grand Ginkgo King of Li Jiawaan (in Guizhou) is 35 m tall, 4.5 m diameter and thought to be 4000 years old. In Xin Cun Temple there is a 2000 year old male tree with 1000 year old female tree grafted onto it.

As an aside, I've often told the story about a tree in Montpellier Botanic Garden donated by Joseph Banks and ordered by Napoleon I to be planted out into the botanic garden after the then Director hid it in his home garden to protect it during the Revolution. That male plant had a female branch grafted onto it from the only female tree then in Europe, from Geneva I believe. It was the first tree to produce fruits in Europe in 1835. Peter showed this very same tree in his talk, including the rather plain label. 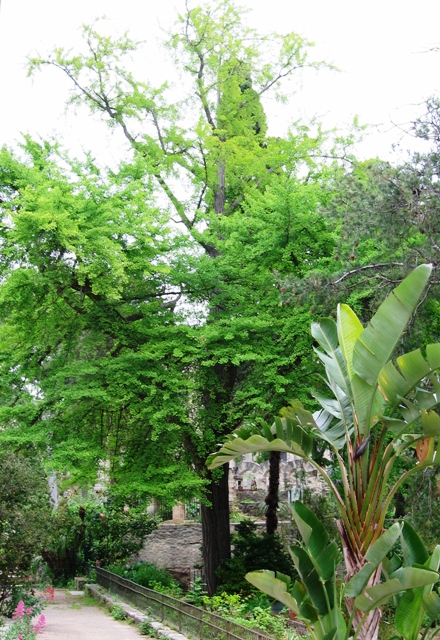 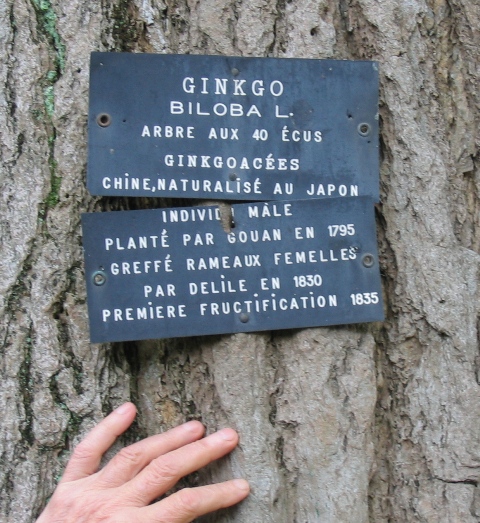 The cooked fruits are eaten in Asia to counter the effects of alcohol. Never eat more than seven at one time, says Peter, even if cooked, because they are 'a little bit toxic'. Seeds have been used for centuries or even millennia for medicine in China. Leaves it seems were never used traditionally by the Chinese but were 'invented' as a medicine in Germany, in the 1970s, by a homeopathic company! A six-year randomised trial involving 3000 volunteers to test if the leaf extract prevented dementia showed conclusively it didn't. 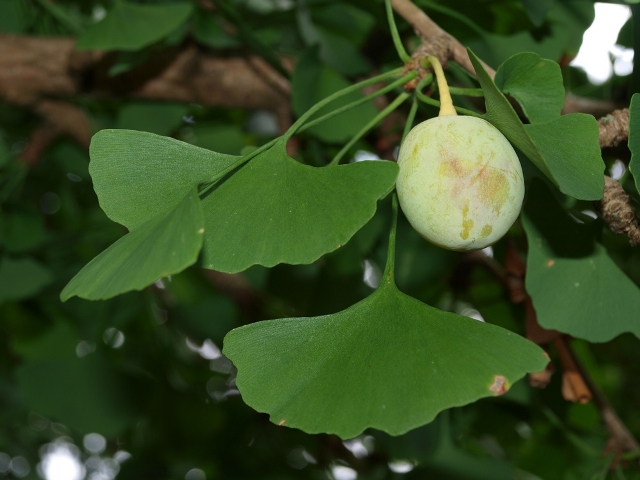 So what other animal eats the stinky gingko fruits? In eastern China it's the animal responsible for the SARS epidemic, the Masked Palm Civet (SARS seems to have been introduced into humans after eating the meat of the Masked Palm Civet). Peter suggests the smell is like rotten meat and eaten by various scavengers.

And what about their chi chis? Ginkgos under stress produce breasts, or nipples, it seems. These are call chi chis. Contact with these trees is thought to help women lactate and there is even a myth about trees surviving fires by spraying milk out of these downward growing shoots at the base of old gingko trees. The chi chis turn out to be ideal for regeneration of the tree but aren't produced by well cared for trees like ours at Kew*. Seems they are a response to stress.

Ginkgos first arrived in Europe in the early eighteenth century, and were planted out in Kew in 1762. Ours is one of the best documented old ginkgos in Europe. However from the audience it was pointed out that Linnaeus planted a tree in the Netherlands that may be a few years older and there is another in London, near a wall at Upton House (10 miles east of Kew) that was also planted in 1762 (the house was removed in 1882 and trunk is still flat on one side).

Ginkgos are survivors. A 1300 year old tree was transplanted from Yangtze Valley into Beijing Botanical Garden prior to the flooding of that valley for the dams. Ginkgos are still alive today that were growing about one km from centre of Hiroshima nuclear bomb blast in 1945. Peter concluded it's virtually impossible to kill a gingko.

There is some debate about where gingkos are still growing in their native habitat given how long they have been cultivated in China. To judge whether a species is native or planted to an area Peter looks for a mix of sexes in the population, mostly single stemmed and growing among other species. He saw some that fitted his criteria in eastern China. But not in the so-called Ginkgo Village further west where they have been cultivated for fruit for 500 years: in this village there is a monoculture of 1,142 females and 8 males, most of them multistemmed.

There was plenty more in Peter's talk, including lots of pictures of ancient ginkgos in China, many growing with their bases wrapped around rocks and exposing their chi chis. This is a photo of a chi chi borrowed from the Ginkgo Forum Pages. 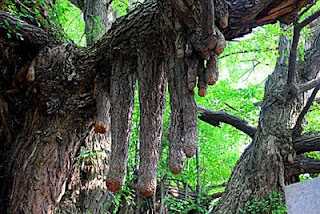 *Well so I thought, and poorly observed. I found out today (20 June 2012), reading Tony Hall's blog on the Kew site that our 250-year-old 'Old Lion' does have them. You can see a picture on Tony's blog.

* From the Archives: some posts from the past while I'm away for a few weeks. This is from 19 July 2012, while I was living and working at Kew Gardens, London.
Email Post
Reactions:

Daisy Debs said…
I have six little Ginko biloba saplings that I have grown from seed/nuts . They are about three years old now and about 1foot high . I will keep them in their pots until they are a bit bigger . I enjoy watching their fresh green leaves unfurling in the Spring and a glorious show in the Autumn when they turn butter yellow . I so enjoyed reading your journal entry about this ancient tree .
7:07 am, June 05, 2019