The platypus of the plant world, most wonderful and very ugly 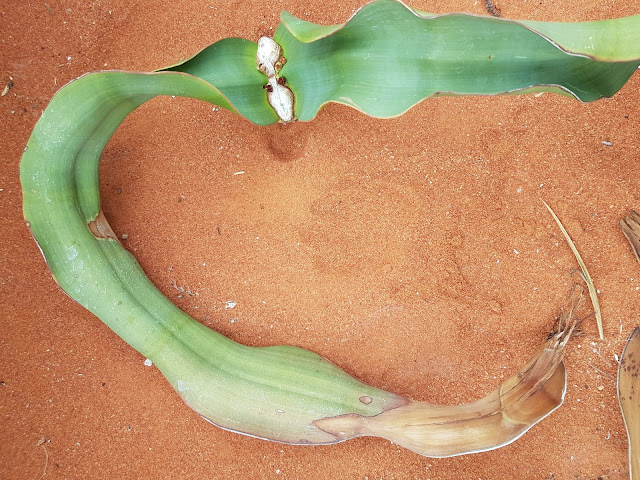 In 1863, Joseph Hooker, then Director of Royal Botanic Gardens Kew in London, described this plant as 'the most wonderful plant ever brought to this country, and the very ugliest'. Charles Darwin described it as 'the platypus of the plant kingdom' - that is, an unlikely combination.

All this I read in a lyrical article by Gillian Cooper-Driver, published in 1994. Cooper-Driver himself was lucky enough to encounter Welwitschia mirabilis in its native habitat on the west coast of southern Africa. There is grows most famously in the Namib Desert receiving less than a centimetre of rain a year (sometimes none) but also in subtropical grassland and savanna.

While I was under the impression that in the desert, Welwitschia survives largely on moisture carried by warm winds condensing on its leaves, it seems the plant depends more on a deep taproot. 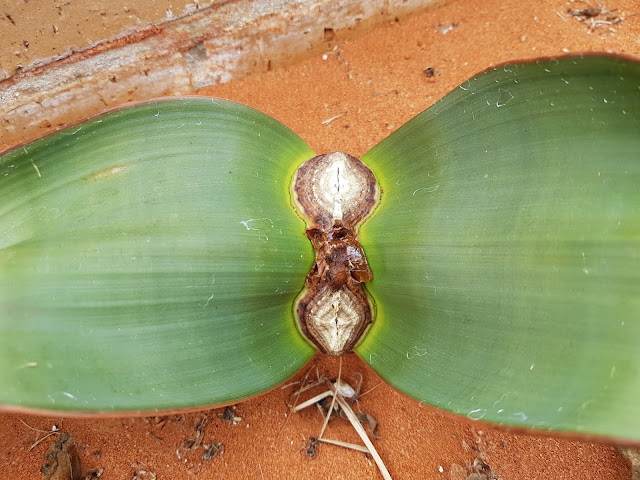 The leaves are what makes the plant so odd, and perhaps ugly, to look at. There are two of them only, emerging from a mostly submerged woody stem which is a little hollowed out at the top. Each leaf can get up to three metres long, but typically they torn and split, sometimes to the base, by the whipping winds and will reach about one metre only.

In the desert the thin, leathery leaves grow only 10-15 centimetres in length a year, and the largest of these single, two-leaved plants might be 3000 years old.

While the leaves might not help with water gathering they do help our plant cope with the other difficult aspect of living in the Namib Desert, heat. Your typical tree reflects about a quarter of the solar radiation reaching it while Welwitschia pushes back as much as 40%. 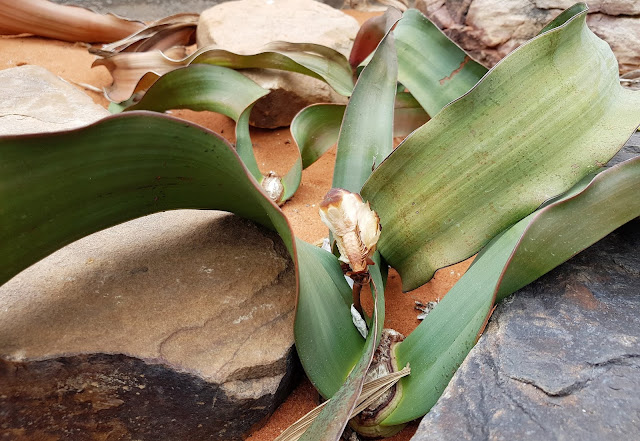 The reproductive bits of the Welwitschia are equally bizarre. Plants produce cones, but not like those in conifers. Inside the cones are structures more like flowers than the apparatus found in your local pine. The 'flowers' even produce nectar, to attract insects, rather than relying on wind for pollination as conifers do.

Plants produce either female or males cones. The female ones are larger and tapering to the top, the male ones small and oblong like. Nine months after fertilisation, the winged seed you can see in the partly disintegrated mature cone (above and below) is dispersed by wind. 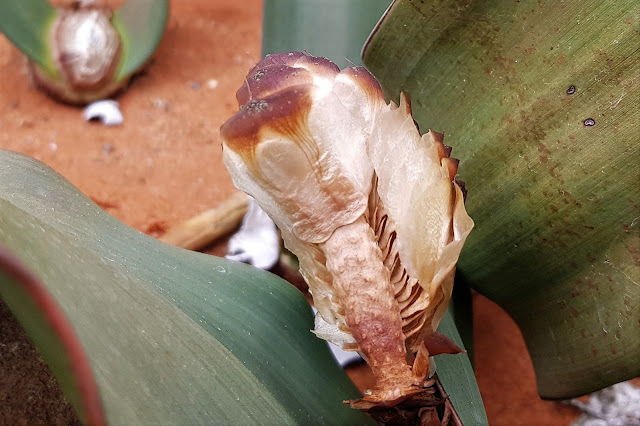 That reproductive biology, and its DNA, have placed it next to the flowering plants (angiosperms), with the nest most distant relatives the conifers but also ginkgo and cycads (all in an unresolved group at the moment).

So, have I been lucky enough to see this plant in the wild? Not yet. Next best is to view it as one of the world's great botanic gardens, Kirstenbosch National Botanical Garden in Cape Town, South Africa. All my pictures are from the glasshouse there, in August last year. 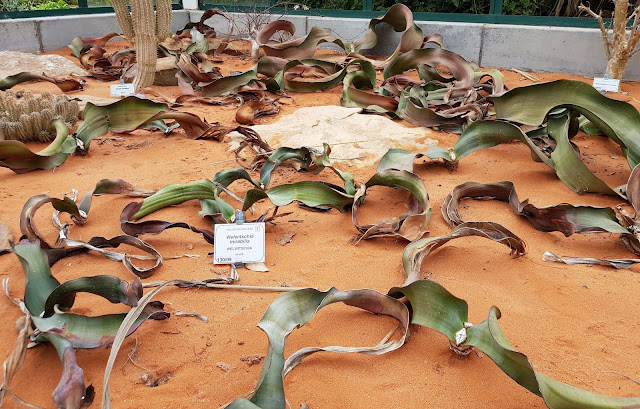 Addendum: The species was divided into two subspecies in 2001, called mirabilis and namibiana, but more recent studies recommend not accepting any subspecies for Welwitschia mirabilis.
Email Post
Reactions:

Katherine Wagner-Reiss said…
Fascinating article and great photos. I was particularly interested in this sentence:
"Your typical tree reflects about a quarter of the solar radiation reaching it while Welwitschia pushes back as much as 40%."
What features allow Welwitschia to reflect so much solar radiation?
Thank you.
12:43 am, January 23, 2019

Talking Plants said…
Thanks Katherine. It's all to do with the colour and texture of the leaf surface I gather. It's constructed to reflect back the light, which is the opposite of what many plants are trying to do. Lot's of cacti do the same with glaucous surfaces and lots of spines and hairs. Tim
9:02 pm, January 23, 2019