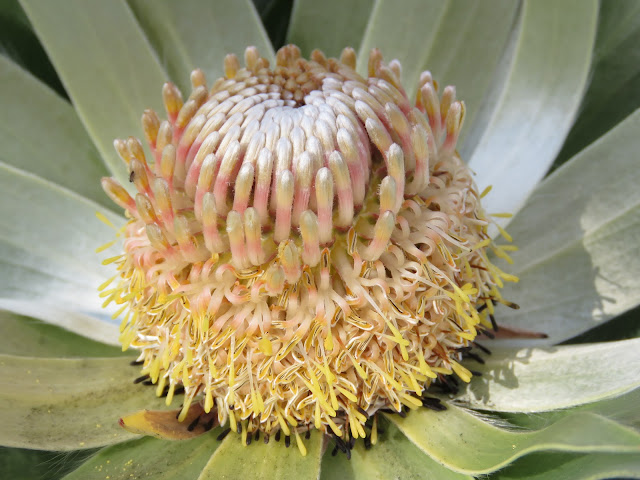 As you might have guessed from last week's post on the southern African Butterspoon Tree, I've been to the Cape. I was only there for a week (in late August) but in coming weeks I'll feature plenty of the floral highlights from this part of the world, starting with the conspicuous and attractive Silver Tree.

One of the spectacular South African Proteaceae (and therefore related to the likes of our banksias and grevilleas), Leucadendron argenteum is attractive to humans and the small beetles mostly responsible for pollination. 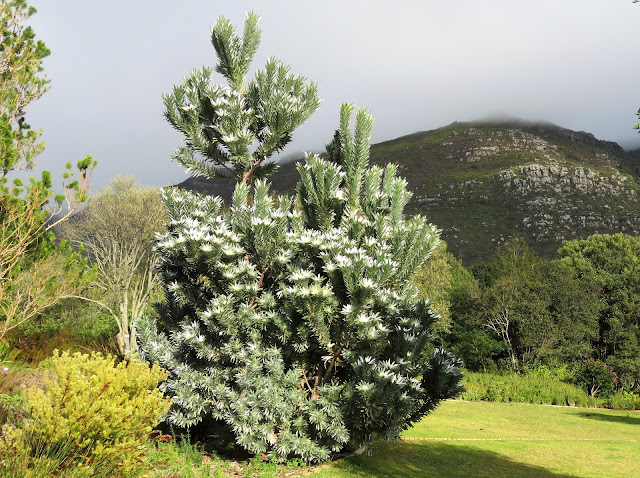 But this is a botanical blog, mostly. The blooms of the Silver Tree contain either male flowers or female flowers, not both, and a single plant will only have blooms on one sex. So, you could say there are male or female plants.

Both produce their flowers in tightly packed cones within a shiny dish formed by the surrounding leaves. This is the male plant, being visited by a honeybee, helpfully helping the local beetles I hope. 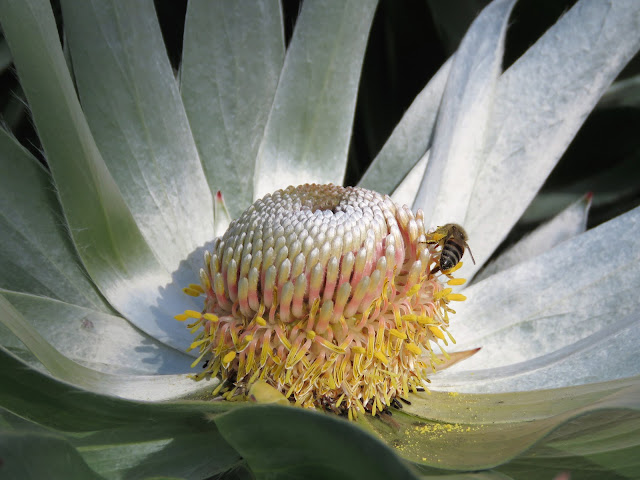 And this is the female, sans pollinator and with flowers still unopened. 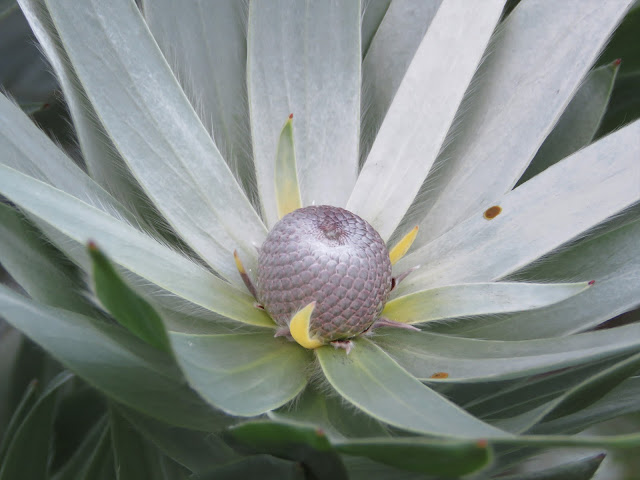 Separate sexes is typical of the coneflower genus, Leucadendron, and the featherbush genus, Eulax, both found only in South Africa. All other Proteaceae, I think*, have bisexual flowers (with male and female bits together).

After the pollen makes its way from one plant to another, perhaps via that sunbird, you get cones like this. 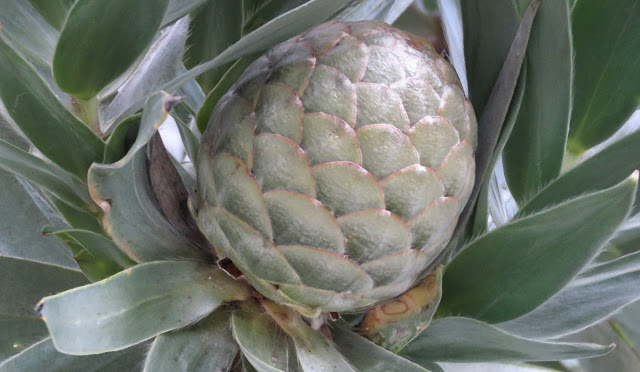 The sheen on those leaves is due to fine hairs that lie flat against the leaf surface during hot, dry conditions - thus limiting water loss - then rise a little in wetter weather to allow better water and gas exchange for photosynthesis.

The leaves around the flowers are the same as other leaves but they spread widely to create a shiny beacon for pollinators. The edge of the leaves have longer hairs, clearly visible in this next picture. 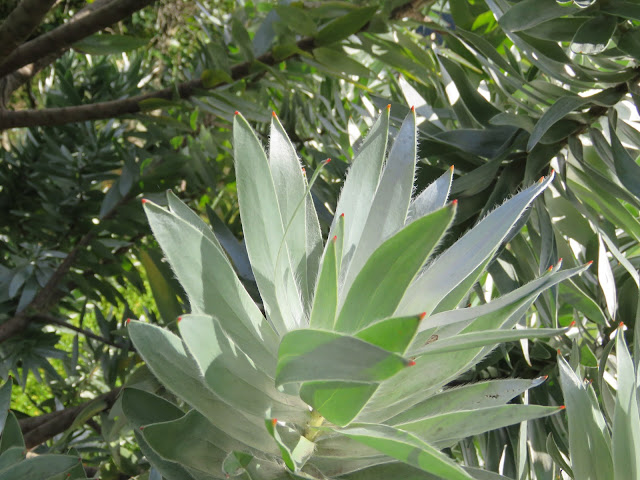 Leucadendron argenteum is one of more than 80 species of coneflower in South Africa (and the world) and one of the most conspicuous around Cape Town. You can see it emerging from the fynbos heathland on the slopes of Cape Moutain, one of the few places it grows today. 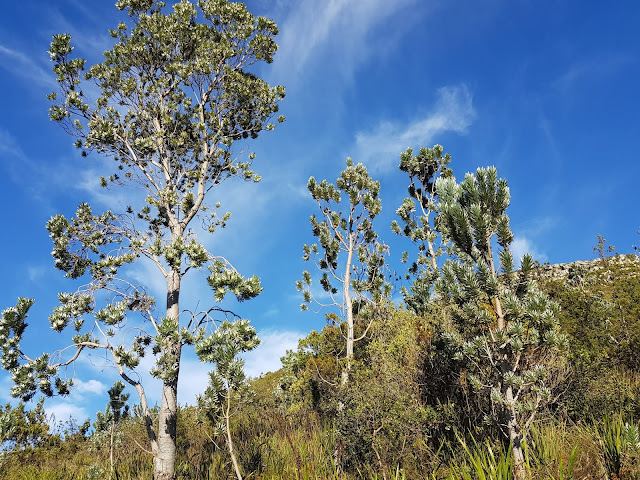 Today, those plants outside cultivation are under threat from land clearing and lack of 'Goldilocks' fire conditions (too little or too much). Like most of our Australian banksias, mature trees are killed by fire but the seed is protected within the woody cone. So as long as trees have time to set enough seed, fire is good, and needed. Although some seed is released before fire and some of these are buried underground by rodents; surviving there, it seems, up to 80 years.

There are other, more unusual, threats, including invasive squirrels eating seeds and genetic 'pollution' due to interbreeding with nearby Silver Tree Plantations.

I seem to also recall from my last visit to Cape Town that it was susceptible to the fungal-like infection phytophthora (confirmed), which is why you see patches of dead Silver Trees (just one dead tree in the photo below). Although Silver Trees are naturally rather short-lived, up to 20 years at most. 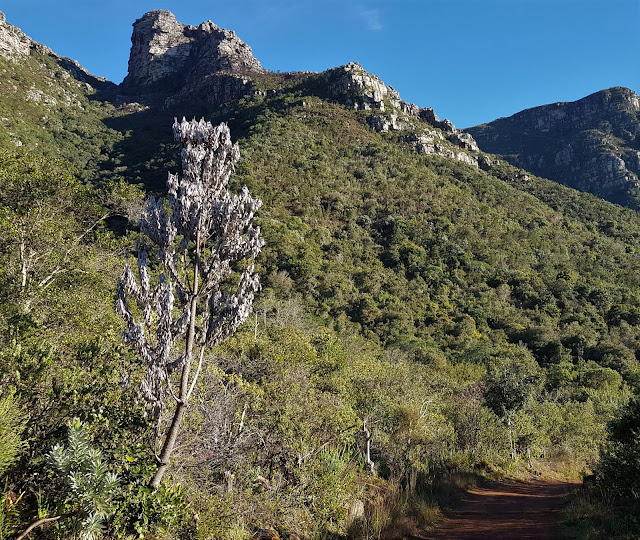 Brittany Burgard said…
Is it common across many different types of plants for leaf hairs involved in water retention to change position in response to changes in weather?
1:10 pm, December 12, 2018

Talking Plants said…
Hi Brittany,
This was news to me so not particularly common. (Although as soon as I say something like that I hear of multiple examples!) Best wishes, Tim
7:06 pm, December 13, 2018