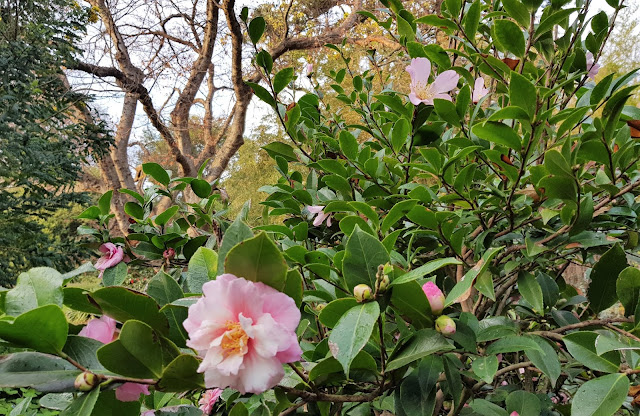 Look carefully at this camellia bush and you'll see two different kinds of flowers. This isn't due to a some crafty graft but to a single plant expressing attributes of two very different parents in spontaneous and odd ways. After last week's light introduction to the genetic mutations called sports, which end up as new cultivars of Camellia, I want to get to the heavy stuff today, a chimera (or, if you like, a chimaera).

My example is a specimen in Melbourne Gardens labelled Camellia + 'Daisy Eagleson'. I didn't know what the '+' meant so I asked my guide Jenny Happell (see last week's post) who said it was short hand for what I later discovered, after reading the 1972 paper by the US agricultural scientist R.N. Stewart and colleagues, was the (at that time) "third, fully-authenticated, woody graft chimera". The plus sign is used for a chimera resulting from a graft.

Let's start at the bottom, under the soil. There you'll find as rootstock a cultivar of Camellia sasanqua called 'Maiden's Blush'. Like all Camellia sasanqua it produces relatively small, narrow leaves (as above) if allowed to flourish above the ground. In this case though, a Camellia japonica has been grafted onto the top of this rootstock plant. Camellia japonica has relatively large leaves, like this next picture. Both images are from the same Camellia + 'Daisy Eagleson' bush. 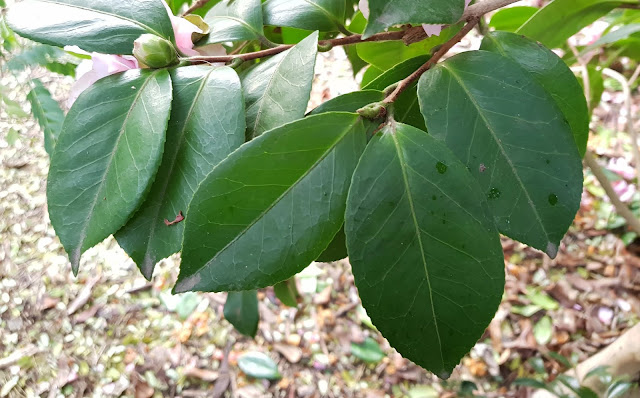 Now a chimera is in Greek mythology a fire-breathing creature, made from the parts of various animals. In real-world biology it is an individual containing at least two different sets of DNA, often due to fused eggs. In the botanical world we most often use the term for a plant containing a mixture of genetically different cells or tissues resulting from a graft.

In 'Daisy Eagleson', the outside (epidermal) tissue of each stem comes from the smaller leaved Camellia sasanqua and the internal tissue is the larger leaved Camellia japonica. These two tissue lines are apparently running independently throughout the plant, which is unusual. We expect the rootstock to stop at the graft, and all the plant tissue above this is the fancy plant you've added.

The two species have different chromosome numbers (the rootstock has six sets - hexaploid - and the grafted on species two sets - diploid) as well as significant differences in leaf and flower size and form. This is unusual. Most chimeras are between plants that differ only slightly.

In this odd 'hybrid' arrangement there are sometimes a combinations of characters and other times 'pure' expressions of either parent. We have four specimens of 'Daisy Eagleson' in Melbourne Gardens, on the right hand side of the African Tunnel Bed (see last post). Mostly you see something more like a Camellia japonica but every now and then the Camellia sasanqua breaks through.

We are used to this kind of thing at the base of a plant, where rootstock starts to grow and might even take over the plant grafted on to it. Not, as occurs here, at unpredictable locations throughout the plant.

Mostly (at least when I looked in July) the flowers on our four plants are of hybrid origin, matching the 'Daisy Eagleson' cultivar form, and the leaves are mostly intermediate between Camellia japonica and Camellia sasanqua or perhaps a little more like typical Camellia japonica. 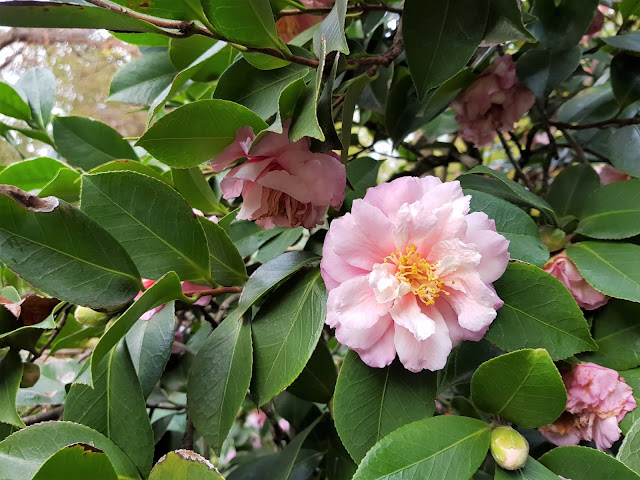 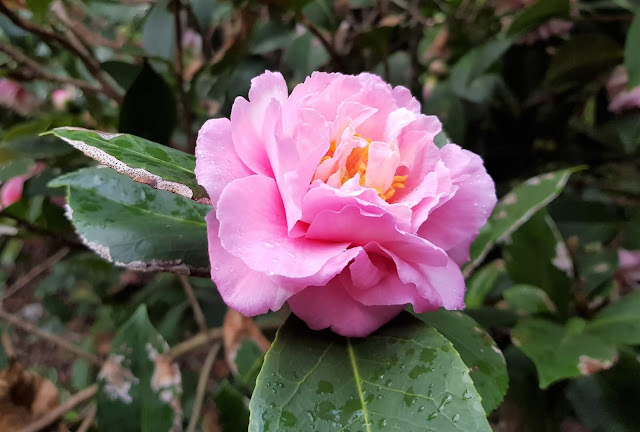 The fragrance though is pure Camellia sasanqua (in another major difference, the Camellia japonica has no perfume), as is the colour (although the second bloom above is getting darker in hue).

Occasionally there are Camellia japonica flowers, which have not visible male or female parts in their middle. Stewart describes these as "dark-rose coloured, white-blotched, completely double, tiered and sterile". This is one here. 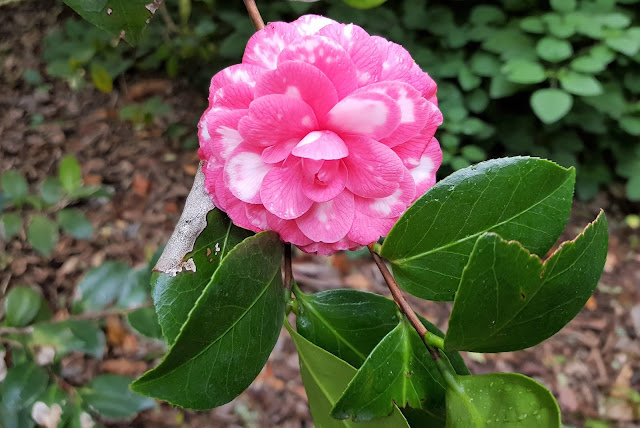 And then, every now and then, you can see a branch emerging with not only smaller leaves but also the pale, smaller single flowers of the rootstock species, Camellia sasanqua. 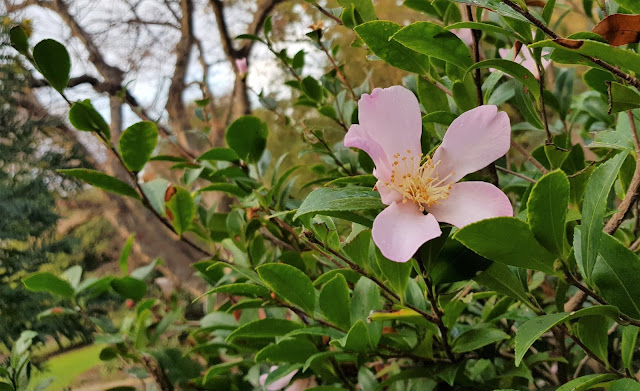 The original graft was made by Tom Eagleson, in Texas in 1954, naming the result after what I presume to be a significant woman in his life. Cuttings have been made from this plant, including two in 1960 which formed the basis of the Stewart study published in 1972. As they note in this paper, selective pruning can be used to produce more of one of the 'parents' or more of the mixed parentage tissue.

Our four specimens have not been selectively pruned and you can see some variation in flower (and leaf) form as the different components of this chimera dominate. If you get close enough you might pick up one of the intriguing novelties in the 'Daisy Eagleson' flowers: 6-8 yellow styles (the female stalks in the middle of the flower) rather than three in both the parent species (although not visible in the Camellia japonica flower). 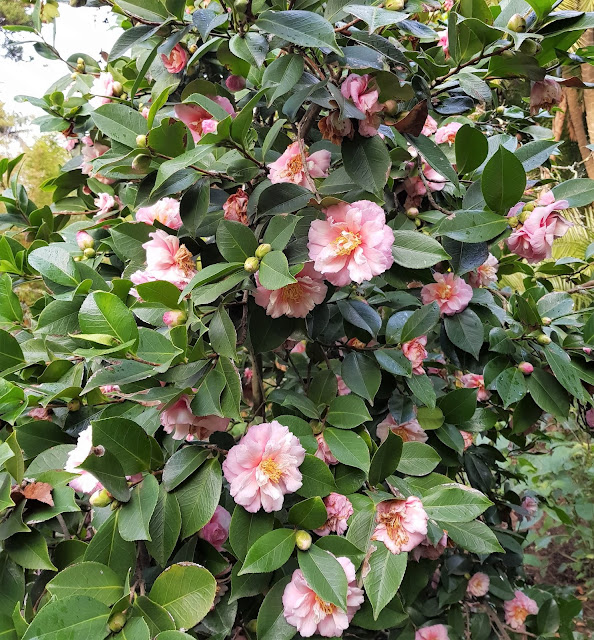 Unknown said…
Daisy and Tom Eagleson were my grandparents, and they both would be delighted (and no doubt, a bit astonished) to know that their camellias were being admired many decades later in Melbourne! Thanks for the post and photos!
1:40 am, August 03, 2019

Talking Plants said…
That's lovely. Thank you for passing that on, and for reading my blog. I hope you get the chance to enjoy the camellias and much more in the Botanic Gardens. Tim
6:01 am, August 03, 2019

Tommy Hyslop said…
A beautiful plant. I knew Tom and Daisy. They had a beautiful nursery in Port Arthur Texas. Tom was my Uncle’s brother and as a kid I loved going to their nursery and developed a love for flowers.
10:42 pm, December 31, 2019

Unknown said…
Tommy, I guess that makes us cousins! Tom and Daisy were my mother's parents. My sister and I have many fond memories of visiting the nursery in Port Arthur. We still have some of their camellias at my family's house in Alabama. We have largely lost touch with that side of the family, so I really appreciated seeing your comment. Karen Robbins
1:31 am, January 04, 2020

Unknown said…
Interesting! My Dad's sister (Blanche) was married to Guy Eagleson, Tom's brother. We have since moved away to North Texas, and most of our Port Arthur relatives are gone now. I'm going to have to track down one of those Camellias I've never tried to grow one in the Dallas area.

Talking Plants said…
That's a fascinating connection to the Eagleson family. It would be fun to track down the cultivar and give it a go in Dallas... All the best, Tim
10:39 am, January 05, 2020

Unknown said…
I very much remember Uncle Guy and Aunt Blanche - we visited with them in Port Arthur many times. It's a small world. Good luck with those camellias in Dallas! Karen
1:19 am, January 09, 2020