Art park in Lisbon to Mughal court in India, via Fritillaria 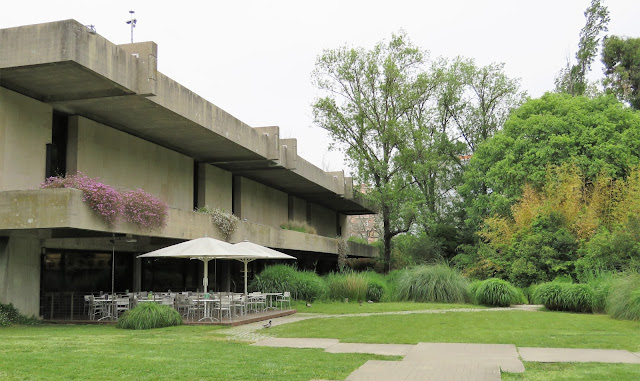 A chance discovery while I was in Lisbon in May, was the Gulbenkian Park, or Garden. It was midway between where I was staying and the University of Lisbon, where my botanic gardens meetings were held. Mostly I caught the Metro but one morning I decided to take my time arriving (apologies to the plenary speaker that day), walking via this Park as well as Parque Eduardo VII, home to the Estufa Fria I featured last week.

I gather this 7.5 hectare park was designed by António Viana Barreiro in 1957, with additional flourishes by Gonçalo Ribeiro Telles in the 1960s, and then renovations in 2002. It does look like the work of many hands, and minds, but that's no bad thing. As an urban park it can be like a city itself, with many layers and different perspectives. 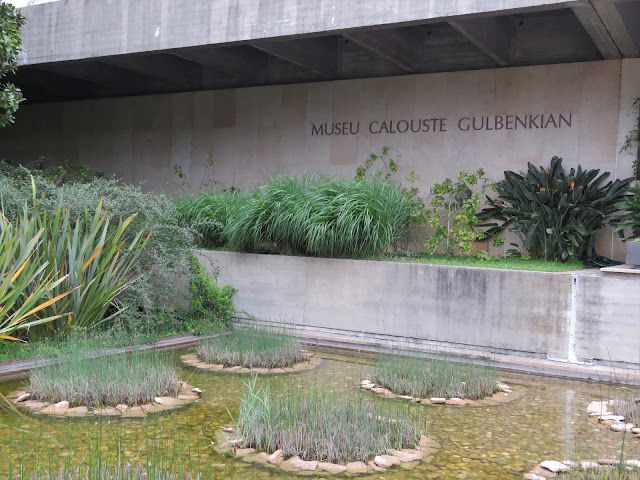 The overarching feel is of a precise geometry with fuzzy edges. There are rectangles and circles, but also vegetation flowering over balconies. Concrete features strongly, in the buildings, in the paths and in the neighbourhood (this is building I passed on the way to the garden, with a particularly brutalist and striking visage).

But back in Gubenkian Park, everything is quite simple and relatively understated. No big flourishes. A city landscape not an international monument. 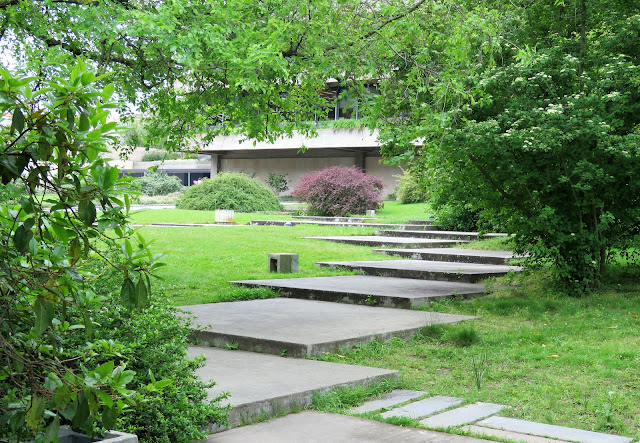 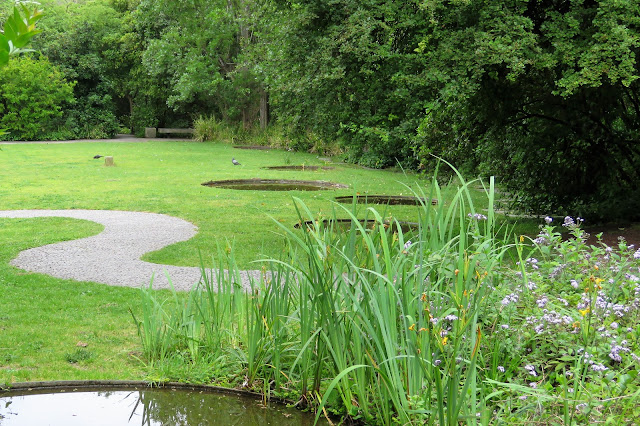 The plantings between the hard landscape features are certainly soft and inviting. Each has its own personality - perhaps reflecting the different designers. I was particularly interested in the stream that wove its way through the park, interpreted (engineered) differently at each crossing. Here are three. 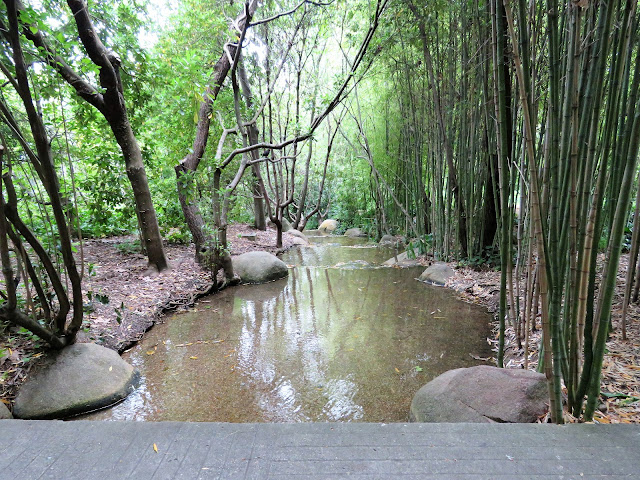 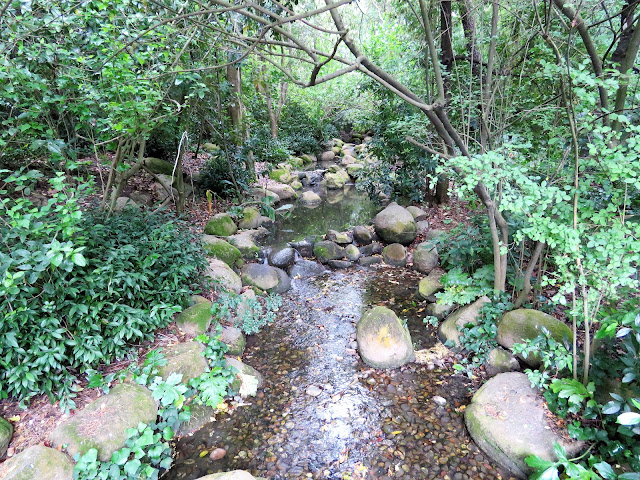 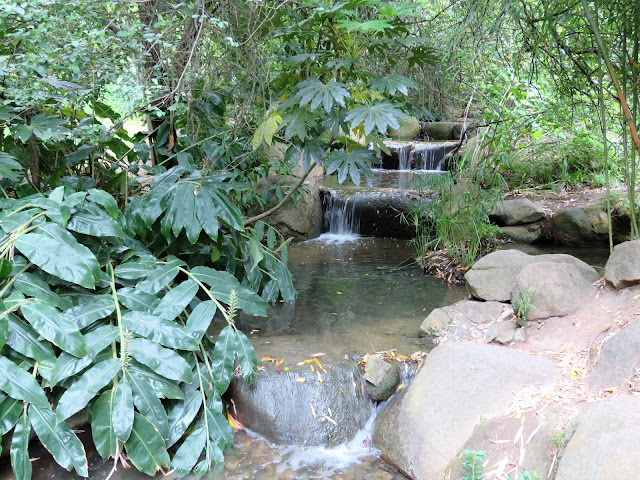 There is this large (concrete) ampitheatre where I gather people used to read books, the author lamenting it didn't happen so much now. When I was there only one person took up residence on the concrete seats, arriving just after I took this picture. He opened up a book to read. 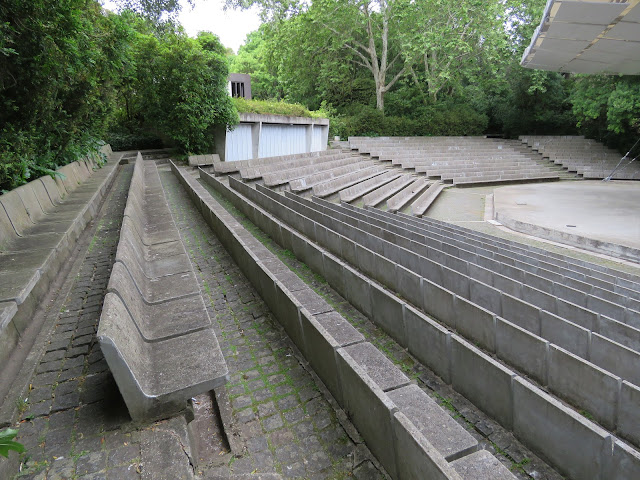 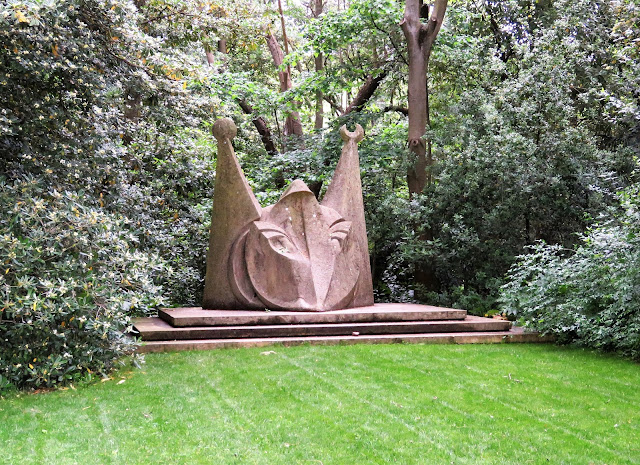 ... and there is the namesake gallery. I had time for only a quick visit to a small exhibition called As Flores do Imperador Do Bolbo ao Tapete (The Emperor's Flowers: From the Bulb to the Carpet). It was created around two carpets produced in Mughal India during the 17th century. The designs and floral elements were said to demonstrate the close dialogue between the East and the West at that time, and in that place. 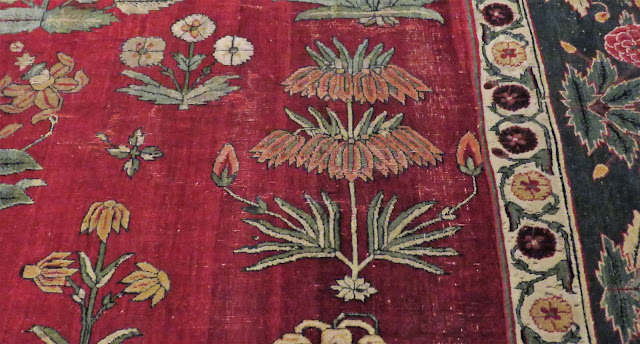 Exotic plants such as Fritillaria imperialis*, a native to regions around India, were brought back to gardens in Europe (such as Kew Gardens in London) and displayed with great pride as exotic treasures. Here is this species caught flower in Kew Gardens a few years ago. 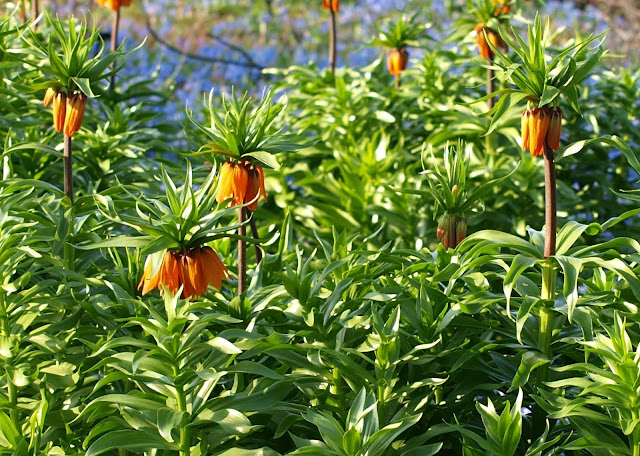 According to the interpretation in this exhibition, illustrations of these plants made there way back to places like the Mughal court where local artists adapted the same drawing techniques and used the designs in their crafts such as rug making.

In 2018, in Lisbon, there is a more modernist approach to design, at least here in the Gulbenkian Park and associated buildings. 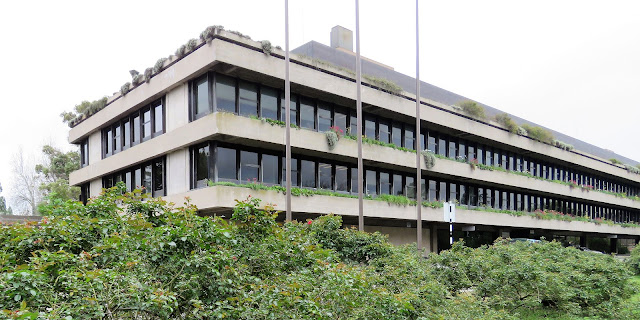 But even now, plants find their way into every picture. 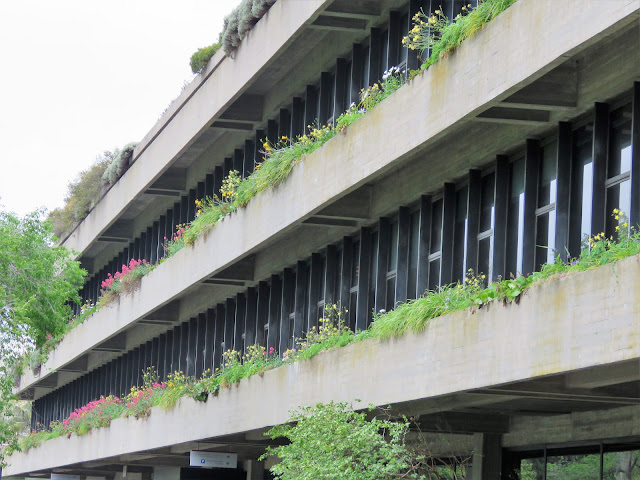 Michael Barrett said…
That must have been a delightful experience, thanks for sharing it here, the rugs and exhibition sound beautiful and fascinating.
10:45 am, August 07, 2018