Post-modern park no barrier to beauty 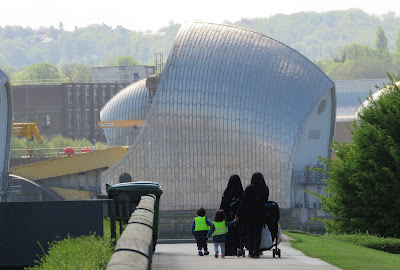 When Lynda and I lived in London, just over five years ago, we bought or borrowed the usual books to find our way around the city. One that looked enticing was London's Hidden Secrets: a Guide to the City's Quirky and Unusual Sights. I'm as sucker for the word 'quirky'.

So it gave us a few ideas although we'd already seen Chelsea Physic Garden, Dr Johnson's House (I've been there at least four times) and the Hunterian Museum (definitely quirky). And I'd been to BBC Broadcasting House at 3 am to talk live with Karl Kruszelnicki back in Australia.

One place we didn't get to then was the Thames Barrier Park. We lived on the Thames (well, at its edge in Kew Gardens), I kayaked each weekend from Richmond to Teddington Lock (featured in a picture I included in last week's post) and it was the spine of the city we visited most weekends to discover museums and galleries. 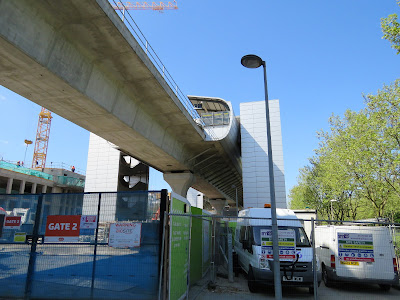 On my recent visit to London, on the way to Lisbon in May this year, I had a free afternoon so I caught the train to the Thames Barrier.  I was keen to what our booklet described as 'London's first post-modern park', as well to travel on the DLR system, via the tube of course, with its elevated rail and stations not unlike those in construction between Caulfield and Dandenong here in metropolitan Melbourne.

Apparently, Thames Barrier Park was, in the year 2000, the first riverside park created in London in over half a century. What was once a sight contaminated with toxic chemical has been converted into 9 hectares of parkland. The rainbow garden is often cited as the main attraction although on my visit there were a few colours missing. Still it was a interesting with its rows of sinuous hedges deep within a trench. 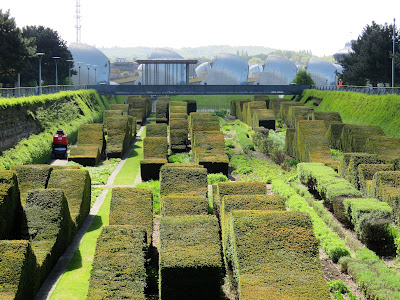 More interesting were the meadows of wildflowers, always a hit in London - the climate and flora (partly 'native' and partly adventive) favour this kind of landscape. 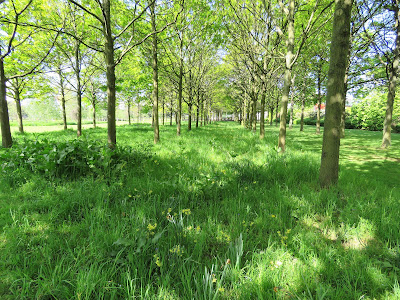 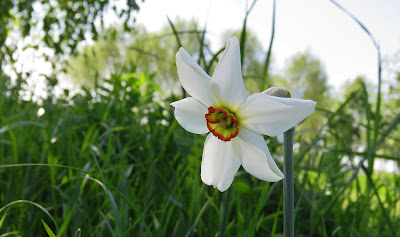 The park is now 18 years old and perhaps needs a little touch up. Still, I like the interesting use of levels to create a greater sense of depth. 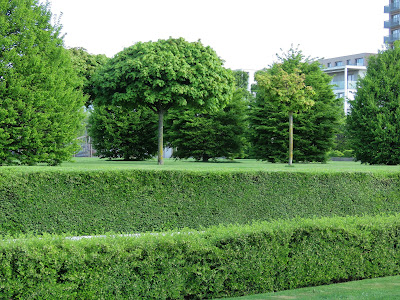 The tree plantings also work well, with quite regimented plantings but in attractive clumps separately by cool green lawns. 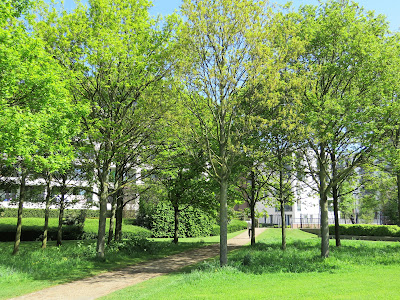 Then there is the backdrop of the 520 metre long Thames Barrier itself, 'the world's second-largest (after one in the Netherlands) movable flood barrier'. Today it protects central London from flooding by tidal surges, although by 2030 it's thought a larger barrier will be needed. That pesky climate change again.

The metallic sails, or armadillos, are the gates that open and close to let water through. Thinking about it all reminded me of the rather strong tidal movements as far up as Richmond, about 80 km upstream, making my journey one way sometimes three times as fast, or slow, as the other. 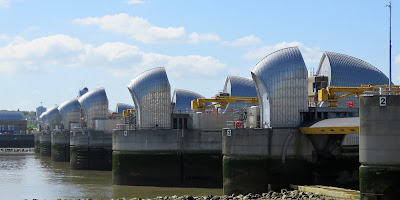 And also, interestingly, of the Gugegnheim in Bilbao, across the Channel and on the other side of the Bay of Biscay ... (photographed when I was there last year, with Koon's Puppy in the foreground). 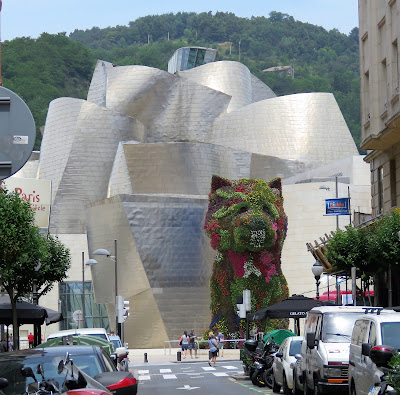