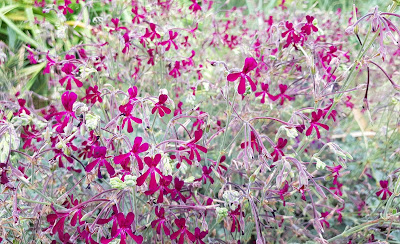 This attractive plant in the South African collection at Melbourne Gardens sports a label identifying it as Pelargonium sidoides. When I looked for more information about the species I wondered if it was a misidentified, or mislabeled, Pelargonium reniforme.

The two species are closely related. Indeed Pelargonium reniforme was originally, back in 1860, considered to be but a variety of Pelargonium sidoides. Pelargonium sidoides is said to have smaller, darker flower, almost black in colour. In my photos these flowers don't look black - although they have a darker sheen in real life. 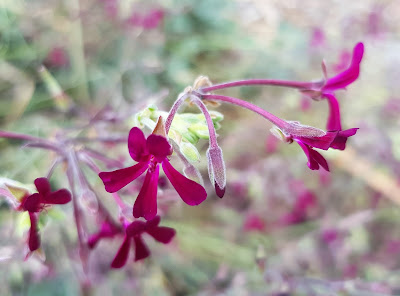 Luckily, as it turns out, our census says we have both species growing in the Melbourne Gardens, so I checked out presumed localities for Pelargonium reniforme and could confirm that we do have both species. This is the flower of what I'm taking to be Pelargonium reniforme on the left, with the darker, smaller flower of Pelargonium sidoides on the right. (Notice by comparing the flowers in the picture above with the right-hand flower below, how even this different setting 'changes' the colour.) 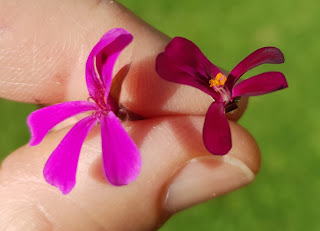 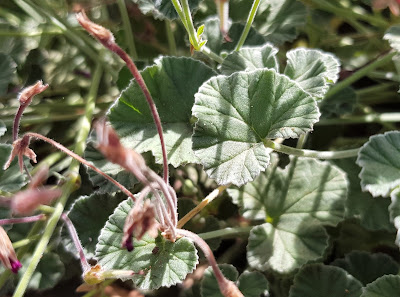 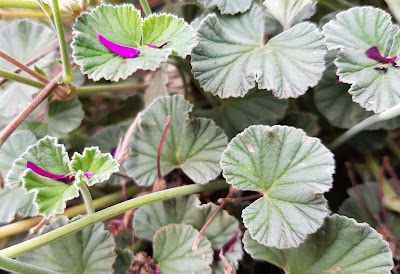 'Heart-shaped' compared to 'kidney-shaped' usually means a bit pointier at the far end, but that's not obviously the case here. The leaves of what we are calling sidoides do tend to be a little more folded or creased half way along and near the stalk, as you can see in this next photo I took of leaves from both species, with Pelargonium sidoides on the right. But maybe we have cultivars, crosses and intermediate varieties... 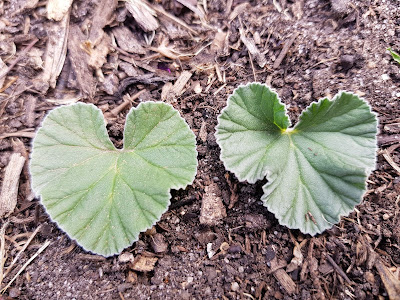 The two species are from southern Africa and reasonably drought tolerant. Pelargonium sidoides is widely distributed across South Africa, from the Eastern Cape through to Johannesburg, and extending into Lesotho and Swaziland, while Pelargonium reniforme is restricted to the Eastern Cape region only. The latter species is under some threat from unsustainable collecting, even though it is widely available in horticulture - not so much threat of extinction but with the potential to disrupt local ecosystems.

Both have medicinal uses, to varying degrees, which is why Pelargonium reniforme is over harvested. Pelargonium sidoides is better known in contemporary medicine but each of them has a long history of use in traditional treatment of stomach and liver ailments, as well as respiratory complaints.

Extracts from the bitter roots of Pelargonium sidoides, traded as Umckaloabo (German) or Rabassam (Afrikaans), have been shown in clinical trials to reduce the severity of symptoms and the duration of acute bronchitis. The efficacy of Pelargonium reniforme, however, is disputed and a 2012 study confirmed it lacks a key active chemical called umckalin. 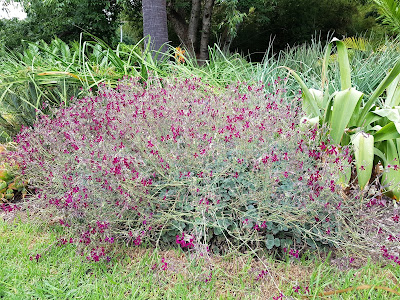 So while it may not matter too much in our garden which species is which, as with all taxonomy there can be important implications. For us, both species are attractive when in flower at the tail end of summer and in early autumn. I quite like the velvety textured leaves too, wishing I'd found them before talking textures recently with Jonathan Green on the Last Half Hour of Blueprint for Living (ABC RN). I could have told him these leaves are described as 'densely pubescent', which they are, and that with a hand lens I could show him some additional differences between the species in the kinds of hairs that create this pubescence. But possibly that wouldn't have been great radio.
Email Post
Reactions:

Katherine Wagner-Reiss said…
As an amateur botanist, I loved your example of how hard it can sometimes be to differentiate between
two close species. But, it is also a lot of fun!
11:37 pm, April 27, 2018

Talking Plants said…
Thanks for the feedback Katherine. It be difficult whether 'professional' or amateur, but should always be fun and educative! Tim
10:30 am, April 28, 2018