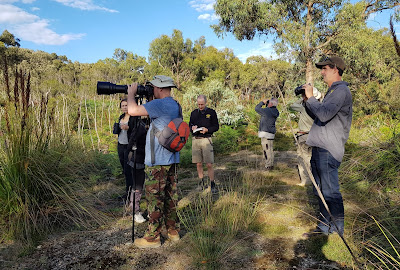 Back in February - in its first week - I joined a group of staff and volunteers at our Cranbourne Gardens to count birds. Actually not so much birds as bird calls (mostly), each representing an individual bird of a particular species.

After twenty minutes we had tallied 12 species (I say 'we' but let's be honest, 'they'), quite a few less than the previous survey where more than 20 had been heard or seen. One species that was more common on this occasion was the Musk Lorikeet, possibly displacing other birds with its raucous behaviour.

I'm more familiar with the Rainbow Lorikeet, which is in a different genus and more common. The Musk Lorikeet has more green with a lovely pale blue cap on its head. It's widespread in south-eastern Australia, just not as common as the Rainbow. At Cranbourne it is attracted by the flowers of the local Manna Gum, Eucalyptus viminalis subspecies pryoriana, and this year the gums were particularly floriferous.

The perfume of the Manna Gum was described to me as smoky honey. There was none of that early in the morning in early February but there were plenty of flowers, like this, attracting the noisy lorikeets. The flowers contain a rich nectar reward. 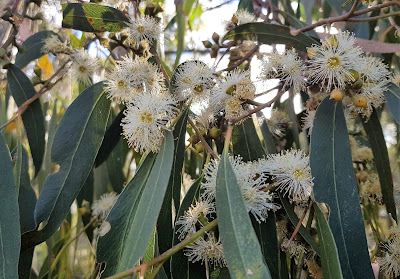 As to the real manna of the Manna Gum, that's a sweet, white material exuded from some leaves and stems in response to insect nibbling (the manna of the bible is thought to have been from a Tamarix, again bug induced). It is also eaten by birds, and mammals, providing a year-round food source when trees are not in flower. Flower time, though, is when there is more food and more feeding birds.

Our variant of the Manna Gum, subspecies pryoriana, sometimes called the Gippsland Manna Gum, is distinguished from others in the species by its bark - rough bark on trunk and main branches - and its buds and fruits - mostly in groups of three. These characters are a little blurry at the edges, and if you are keen on sorting out your local Manna Gum species you should consult VicFlora and perhaps Kevin Rule's key in the 2011 issue of the Royal Botanic Garden Victoria's scientific journal Muelleria.

The Gippsland Manna Gum is not uncommon in Victorian woodlands near the coast from Geelong to Lakes Entrance, reaching 15 metres tall at most. The tallest Eucalyptus viminalis (subspecies viminalis), in more fertile soils on mountain ranges, can be in excess of 80 metres.

Most of us know the Manna Gum as 'the koala tree' because the leaves are one of their favourite foods. We get koalas in our trees at Cranbourne Gardens, although fewer of them than Musk Lorikeets. 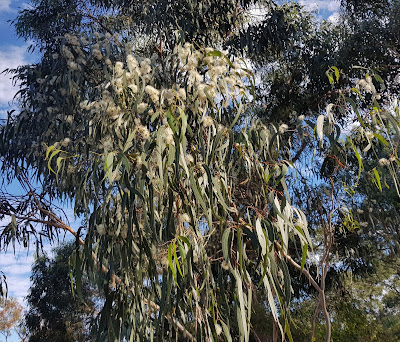 You can see in this picture the willow-like appearance of the leaves, although perhaps shared with many other eucalypt species, which inspired this species botanical name 'viminalis'. The subspecies, is after Canberra-based eucalypt botanist, Lindsay Pryor (1915-1998).

In case you are wondering, I didn't see, let alone photograph, a single Musk Lorikeet. But I heard plenty of them. As to koalas, not even a grunt.
Email Post
Reactions: