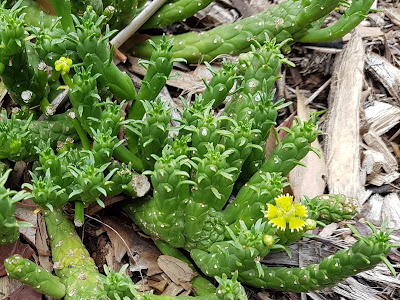 In Greek mythology, Medusa has a pair of fetching wings and a hairdo of snakes. That is until she looses her head. Unlike most Greek monsters this kills her but the severed head leads to various consequences such as children arising from spurted blood and viewers of the head turning to stone. And so on.


So when a plant is called Medusa's Head you are on the look out for something gruesome, or perhaps reptilian. This is what the female flowers of Euphorbia caput-medusae looks like. 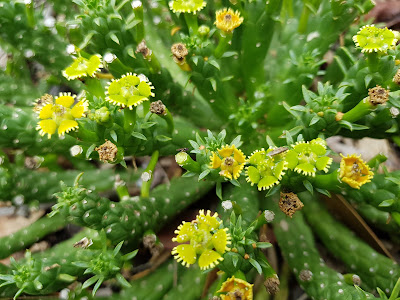 I could read into these flowers a hairdo of some kind but Plantz Africa has a far better (and correct interpretation). This plant from the Cape region of South Africa has 'multiple serpent-like stems arising from a short ... woody stem'. So it this habit that gives this plant both its species epithet and common name.

As with many of the world's garden plants, this species was described from Europe (in 1753) by the famous Swedish biologist Carl Linnaeus. It had reached the Netherlands in 1700 and was grown by Linnaeus's friend and previous employer George Clifford, a director of the Dutch East India Company. Hence the reference to a very European mythical figure rather than one from Africa. 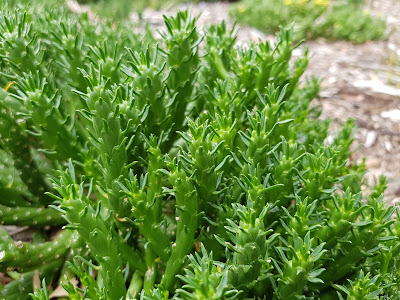 The specimens photographed here are in our South African collection at Melbourne Gardens (in January 2018) and only a few years old. A mature plant near Cape Town, where they are common, can reach a metre across.


This is a good garden plant for a warming, drying climate. It's succulent, so it can hold water in its stem, and the leaves are rather small, so they won't loose much water. The whole plant is photosynthetic (green) so it will take maximum advantage of sunlight to produce sugars (probably taking up carbon dioxide at night, but that's another story).

Let's take another look at that flower. Like most Euphorbia, or spurges, the 'flower' is peculiar rather than pretty. 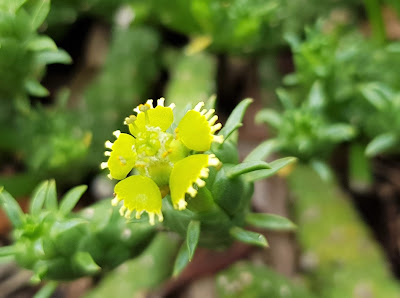 The whole thing is called a cyathium. There are five fan-shaped bracts radiating like hands from the outside of the flower. Each of these bracts has a fringe of glands. In the middle of the cyathium is a single female flower surrounded by six small male flowers - if you look carefully you'll see the yellow pollen at the tips of a pair of anthers on top of a single stamen rising out of each male flower.

Bees visit the cyathia, but there is a twist to this. Apparently, the honey produced by bees visiting Euphorbia species is poisonous to humans but not bees. The sap of Euphorbia contains some nasty chemicals and it is these, it seems, that end up in this unwanted form of honey called Noors.

In South African mythology there may not be a medusa, but there is a 'deity' called Gao!na who turned himself into honey 'to poison a man who had displeased him'. The honey he became, Noors, had its origins in flowers such as those of this exotically named head of snakes.

Katherine Wagner-Reiss said…
Loved this post! First , because I had never heard of this plant. Second, because of the interesting way you tied the Latin name and the myth with the plant, and third, because you really got me to look at all the parts of that cyathium ( and taught me the word "cyathium")!
9:51 am, April 19, 2018