Dasylirion again, with fibre and indent 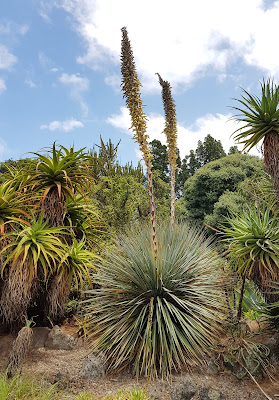 The last time I posted on a Dasylirion - an agave relative with a no-frills columnar flowering stalk - I placed it in the family Dracaenaceae, the Dragon Tree family. Before that it used to be nestled in with agaves in the Agavaceae. Nowadays, it is with asparagus, in the Asparagaceae, albeit in its own little subfamily Nolinoideae along with the Dragon Tree, but also aspidistras and mondo grass!

Today's examples are from the Melbourne Gardens, and likely to be Dasylirion wheeleri and Dasylirion acrotrichum. Our Identifications Botanist, Val Stajsic, says this genus (and related Beaucarnea) are tricky to identify and all five named species in our collection need checking.

For this post I'm assuming the ones with leaves twisted about half way up and with a necrotic but mostly undivided tip are Dasylirion wheeleri, from Texas up to Nevada and North Carolina. One of them on Guilfoyle's Volcano sports a nice label supporting this identification. The other, below, has less of the twist but more going on at the tip of the leaf - a wonderfully eccentric fraying. These fibres, and those embedded within the rest of the leaf, are used by native American to weave baskets and mats. It's (I believe) Dasylirion acrotrichum. 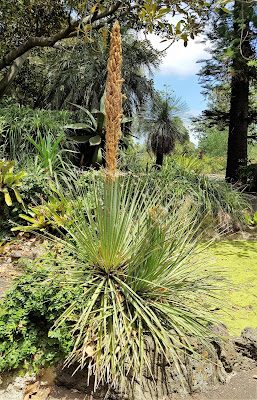 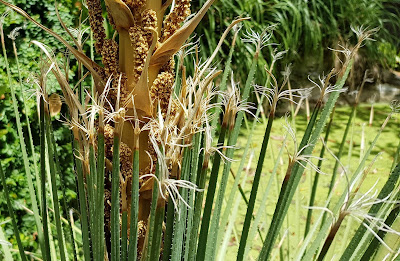 But let's return to Dasylirion wheeleri, often called Common Sotol, from west Texas, New Mexico and Arizona. You also see the name Desert Spoon, but that is applied to various species of Dasylirion, including the Texan Sotol, Dasylirion texanum, I featured last time.

Sotol is the name of an alcoholic drink, similar to Tequila and Mezcal but made from Dasylirion growing in the vicinity of Chihuahua. (The spirits distilled from succulents in Mexico have a nomenclature as complex as the genus Dasylirion, based on the species used, its origins and then aspects of the production process.)

Unlike their agave relatives, the Desert Spoons don't die after flowering but then they won't necessarily bloom every year either. The inflorescences are packed full of flowers, either male or female, but usually not both on the same plant (but see below). This is Dasylirion wheeleri with a (broken) male plant on the left and a(n unbroken) female plant on the right. 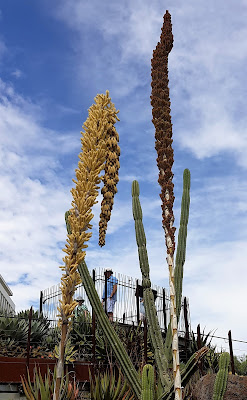 Katherine Darrow, in her blog on a desert park in Phoenix, says you can easily pick the male plants by their 'long curly bunches of pollen-producing flowers'. She says they look like Cheetos 'but without the orange dye'. I was thinking maybe Twisties but you know the kind of thing. 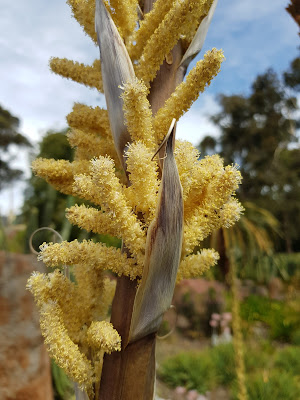 Although ... in our specimens of Dasylirion acrotrichum (with the frayed leaf tips), like others in the genus I gather also meant to be either male or female, the ostensibly male flowering stems do include a few male+female flowers. As this next picture shows.

Darrow also makes the interesting observation that you'll find bees and other insects swarming around the male flowers harvesting pollen, but none around the female flowers. Sure enough, plenty of bees and crawly ants on the male flower stems. Here's a bee, half way up, but the ants are too small to see. (Below that a flowering stem on its side so you can see more bees...) 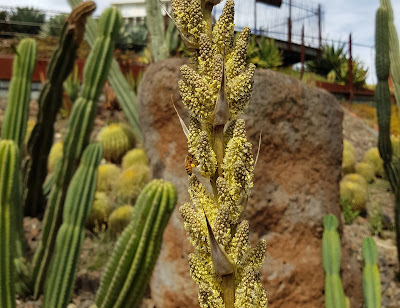 But none on the females. 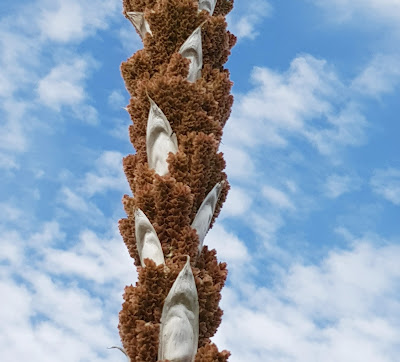 That's because neither sex produces nectar, the other thing bees are after. So the bees (and ants) presumably have no, or little, pollination role. Instead these plants rely on wind for pollination - hence the large amount of pollen produced and the tall, wavering flowering stalk.

Both species have imprints in their leaves from the spiky edges of their neighbours and the picture below of Dasylirion acrotrichum shows them clearly. This is an attractive feature of many agave relatives, and something I mentioned a few weeks ago.  It's also a reminder that these are spiky plants and you should take care when planting any species at the edge of a garden bed. 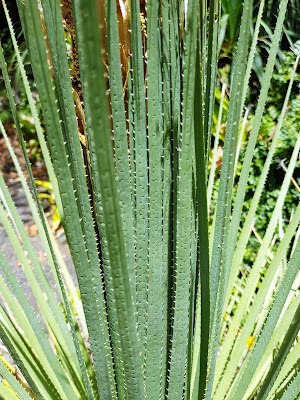