It's a girl, he says stereotyping a febrifugeous hydrangea 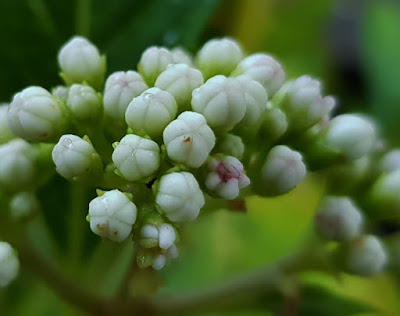 We had been waiting patiently for the flowers of the Blue Lacecap to help balance out the preponderance of pink and pale flowers in our back garden. Through December the buds stayed closed and mostly white, albeit with just a tinge of colour. Then, in the first week of January, the unfurling. 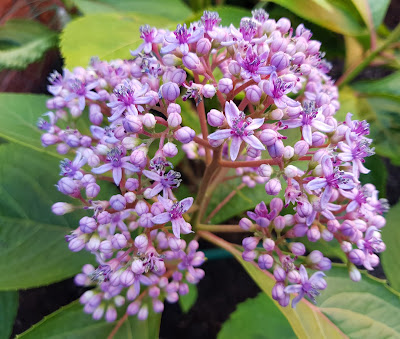 What I hadn't realised, and what isn't expressed in the usually reliable descriptions from Missouri Botanical Garden or the Flora of China, is that the flowers of this Dichroa species aren't always blue (or white). Like the related and commonly grown Hydrangea macrophylla, the flower colour depends on the amount of aluminium available in the soil (often using acidity as surrogate measure - acid for blue, akaline for pink).

The genus name, meaning 'twice colour', may be a hint; or it may refer to something entirely different! Jane Edmanson, to her credit, describes the colour alternatives in her brief write up of this species for Gardening Australia in 2015, and nurseries such as Brenlissa are on to it, using an ambivalent common name, the Blue/Pink Cap.

Which also raises the matter of the common name I was given (when the plants were purchased). Lace Cap or Lacecap is a grouping term usually applied to those hydrangeas with smaller fertile flowers surrounded by a ring of showy sterile flowers. In the case of Dichroa, all flowers in the cluster are fertile. Such are the vagaries of horticultural taxonomy it may be that Blue Lace Cap or Blue Cap is a selected cultivar rather than a general common name, explaining perhaps why my blooms at home are more showy than those (from a true species) in the botanic garden.

In any case, I think our backyard blooms are best described as lilac in colour, that is, pale violet, purple or even mauve. Photographs don't quite capture what I saw in sunlight. In any case, more at the pink end of the spectrum than the blue. Which means we have presumably alkaline soils with less available aluminium. 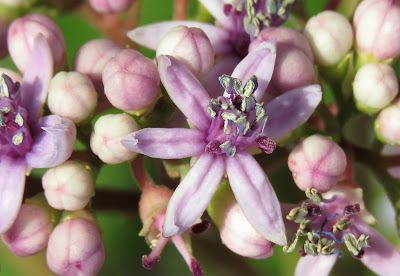 In the Melbourne Gardens, however, we have a plant growing in a heavily shaded part of the South China Collection, and its flowers are, and you can see (a little past their peak), pale blue. Plenty of acid in the soil here, providing aluminium for those all important blue colour chemicals. 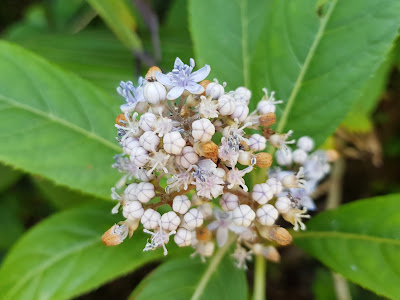 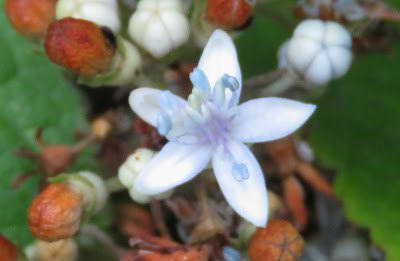 Although not mentioned, even as 'rarely cultivated', in Roger Spencer's Horticultural Flora of South-eastern Australia, the Blue Lacecap (Dichroa febrifuga) is destined to sit alongside the Oak-leaf Hydrangea (Hydrangea quercifolia) as one of the harder, less water-guzzling 'hydrageas' for the home garden (albeit not quite as dry tolerant as that one). That's not to say it doesn't like a drink or doesn't droop a little at the end of a summer's day, but it seems to be a little more dry tolerant than the deciduous Hydrangea species.

There are 12 species of Dichroa, all from the Asian region. Jane Edmanson says Dichroa febrifuga, the name generally applied to the plants photographed here, comes from the Himalaya region of Nepal, which it does, but also from India, China and through to Papua New Guinea. It grows at altitudes from 200 to 2000 metres above sea level.

In China, the Blue (or pink) Lacecap is a widely used medicinal plant, particularly to control fevers - the species name is a Latin compound of febris (fever) and fugare (expel). As Missouri Botanical Garden remind us, the English word febrifuge is used for things that reduce fever. Dichroa febrifuga is sometimes even called Chinese Quinine, from its use in treating fever associated with malaria. 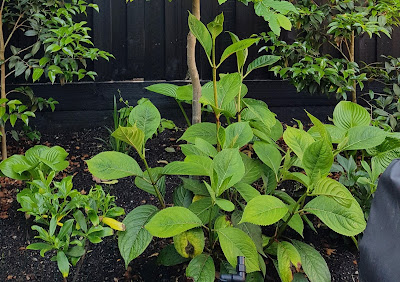 A pretty and interesting plant, whether flowering blue, pink or lilac. I was waiting with some anticipation for the berries to appear which, although sometimes hidden among the foliage, were said to be very 'ornamental', and, apparently, gentian blue... What I can report instead is that our cultivar, our climate and/or our garden are not conducive to fruit formation. All we have in late-February are brown and drooping flower heads.
Email Post
Reactions:

Anonymous said…
There is a dichroa growing in the Western bed at the Ballarat Botanical Gardens. I haven't checked recently, but it is probably in flower now. A very pretty sheub growing in deep shade.
9:09 am, February 27, 2018

Talking Plants said…
Now that I have one in my backyard I keep noticing them all over the place. I think they are becoming rather popular! I should have looked out for that specimen in Ballarat when I was there last week... Next time. Tim
9:11 am, February 27, 2018

Unknown said…
Tim in my alkaline Perth sands my Dichroa and the hydrangeas are always pink. I long for blue too. It's label said it was the 'evergreen hydrangea' - that's what people who can't remember the botanic name call them.

Helen Young said…
Hi Tim. Great post as always. I always call them evergreen hydrangeas, as that is the favourable feature when clients don't want a deciduous plant. Here in Sydney, what is sold is labelled Dichroa versicolour. I first noticed the colour variation when I struck a cutting from my blue-flowering garden plant into potting mix, and it flowered pink. It's a vigorous, fast grower in my garden and seems able to grow in quite difficult situations.
5:03 pm, February 27, 2018

Talking Plants said…
Thanks Helen, and 'write1'! Yes the evergreen hydrangea, which makes sense. It's been interesting watching it through the summer, leaves drooping and recovering as only members of this family can do. I'm about to get a second flush of (purplish...) flowers so that's nice. Seems to be mighty tough as long as there is a drink somewhere on the horizon...
11:10 am, February 28, 2018