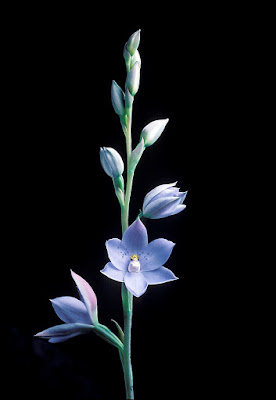 They say you can tow a car with a rope of the elastic ice-cream made from orchid tubers. But then they say a lot of things.

This particular achievement was assigned to the 'legend' category by The Sunday Age restaurant critic Dani Valent in her recent review (20 August 2017) of a new Turkish ice-cream stop in Northcote called Cuppa Turca.

Turkey is the place for tough and stretchy ice-cream (dondurma), traditionally elasticised with an extract from the tubers of orchids called salep (or sometimes Sahlep or sahlab). As I mentioned in passing last year, the underground storage and over-wintering part of some Orchis species are ground into a flour which is included in drinks and sweet foods. 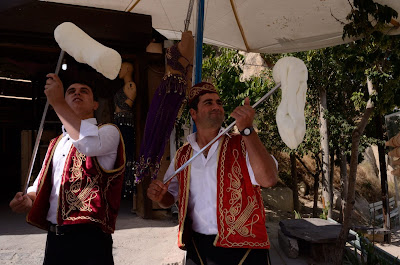 It seems a cup of salep was popular in the Ottoman Empire, making its way later to England in the 17th and 18th centuries, where it was called saloop. But, as you might have guessed, relying on the rather small tubers of a not particularly common plant has its consequences. In Turkey wild orchid populations have suffered through over harvesting and the product is now banned for export from that region.

In their mildly indulgent The Book of Orchids, Mark Chase, Maarten Christenhusz and Tom Mirenda state that all ground orchids in many parts of Turkey are becoming rare due to unsustainable harvesting for salep. To meet the demand within Turkey, collecting has extended into neighbouring countries with potentially similar results.

According to Wikipedia, the Romans also partook of saloop, preferring to call it satyrion and priapiscus, a reflection of its presumed aphrodisiacal properties. I'm guessing this has a bit to do with a pair of tubers sometimes looking like testicles, which the Greeks called orckhis (hence Orchis and orchids). 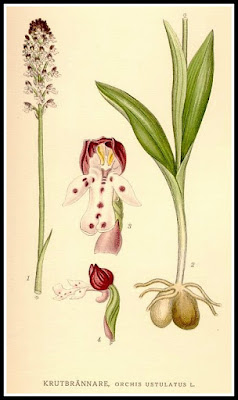 Today though, orchids and their testicles are in short supply. The new ice-creamery in Northcote uses a salep substitute, 'a secret recipe that replicates the original'. The product is 'stretchy and smooth and melts very slowly, just like the real thing'.

So what about the real thing, these orchid tubers. The Australasian Native Orchid Society packages up the excess tubers produced from cultivated plants, distributing them to members so they can grow their own. 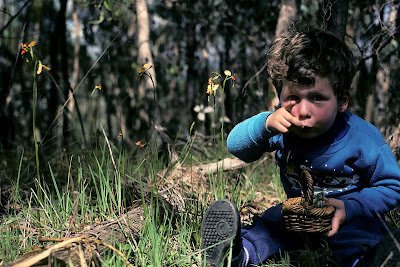 Not all orchids have tubers, or tuberoids as they are sometimes called, but most Victorian species do. In fact of the nearly 400 species of orchid in Victoria, all but a handful produce tubers or at least fleshy underground roots of some kind. Those that don't are the larger rock and tree orchids.

Southern Australia is definitely the place to go for tuberous orchids. Not that I'm saying there is a potential salep market to be had. Far from it. Many of these species are rare and threatened, and all are protected against collecting on public land. But it makes you think, of ice-cream and other things. 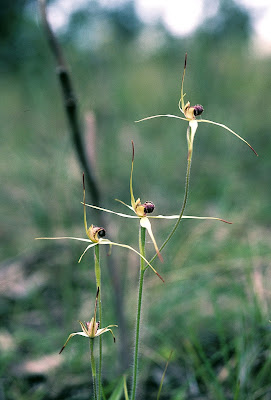 Images: A couple of local tuberous orchids from Victoria (the Spotted Sun Orchid, Thelymitra ixioides at the top; a spider orchid, Caladenia valida, above; and protected by my son Jerome a few decades ago, the Wallflower or Donkey Orchid, Diuris orientalis) plus from the web an image of Orchis ustulus, one of the species harvested for salep and illustrating a pair of tubers, and a tourist site photograph of Turkish dondurma.

Rob Dabal said…
Hi Tim. Perhaps some bushland managers with time on their hands could have a go with Disa bracteata? Cheers Rob
6:56 am, October 03, 2017