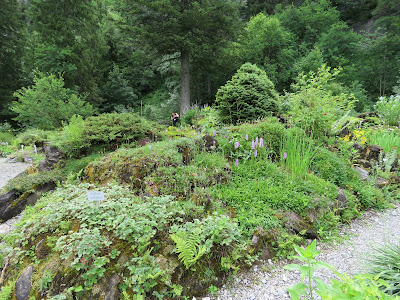 Let loose into the rock garden at La Thomasia, the alpine annexe of Musée et jardins botaniques cantonaux in Switzerland, it was difficult to stay tuned to the expert commentary with so many flowers to peer at and photograph. The saxifrages particularly caught my eye but I did pick up a mention of them being an 'air conditioning plant' ... or maybe an 'air conditioned plant'. 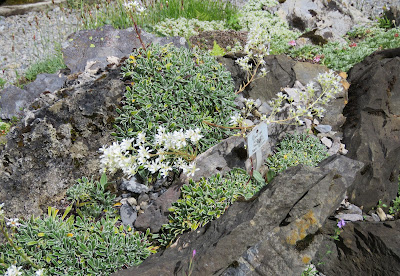 I didn't catch the whole story but I gather the white crust on the surface of Saxifraga leaves are in some way providing air conditioning for the plant. That was back in June. A few weeks later I read a brief note in the Royal Horticultural Society's magazine The Garden about a new microscopy technique revealing previously unseen detail of the cells that form this crust.

And so to the source of the story, the University Botanic Gardens at Cambridge. As the University puts it, 'the tight hummocks and large colourful flowers of many saxifrages have captivated gardeners for centuries'. And there are many, 440 in the genus Saxifraga and another couple of hundred in its family, Saxifragaceae. Mostly they grow in cold places, towards the North Pole or up a mountain, and among rocks. The location of La Thomasia, near Bex, suits many of them. 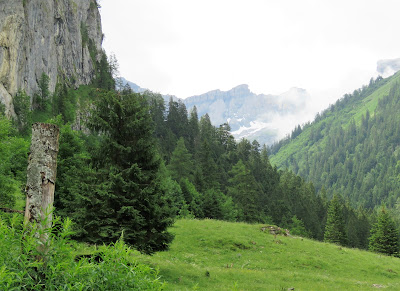 I was surprised to read that the name 'saxifraga' - Latin for ‘stone-breaker’- doesn't refer to what they do in nature but to their historical use for treating urinary stones. But that's not why I'm posting pictures from La Thomasia. It's all about those crystals. 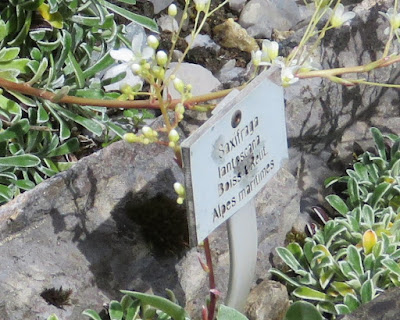 First let's tell you what you are looking at in my pictures. The species seems to be Saxifraga callosa, although labelled in La Thomasia as Saxifraga lantoscana. I see there are cultivars of Saxifraga callosa in the trade under the name 'Lantoscana Limelight', presumably derived from what used to be called species or variety lantoscana from the 'Maritime Alps'. 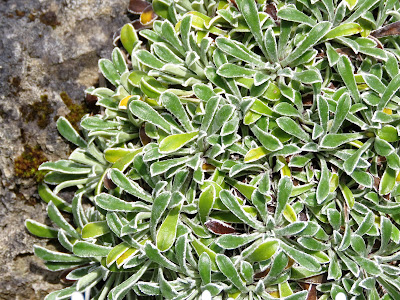 This isn't the species studied by the Cambridge botanists but the white crust is there, as you can see. The first scientific report of these structures in Saxifraga was in 1890 but it took another 40 years for confirmation that this coating is found in most species of Saxifraga.

The Cambridge team chose Saxifraga cochlearis because the hydathodes, the structures in the leaf that exude the crusty material, progress from small at the base of the leaf to a 'volcano-type structure that spews out of the crust' at the leaf tip. This appealed to them.

They argue that now, 127 years on from that first nineteenth century report, we are close to a satisfying explanation of the 'inner workings' of the Saxifraga leaf. This is the result of a new cryofracture technique (cracking open the leaf while deeply frozen) to prepare plant material for viewing in a scanning-electron-microscope.

Hydathodes expel liquids onto the surface of the leaf. Sometimes called guttation, this seems to be a way for the leaf to regulate water pressure or mineral content, perhaps expel nasty chemicals and/or fight off things that might eat or kill the leaf. The crust on the leaf of a Saxifraga is what's left when the water evaporates, mostly calcium carbonate (limestone).

While we now have a better understanding of how the hydathode works the researchers still can't determine if the crusty deposits help the plant by simply allowing the exclusion of excess salt, or by providing some particular role when deposited on the leaf surface. 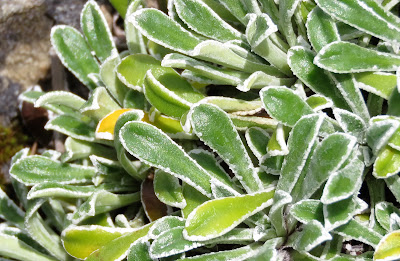 So I'm none the wiser as to how the air-conditioning system works. Perhaps reflecting solar radiation, perhaps by channeling air along the leaf surface (the crust are often on the margins) or perhaps by releasing a cooling layer of water (albeit salty and leaving a crust). Maybe the next papers from the laboratory and gardens of Cambridge University will help.
Email Post
Reactions: