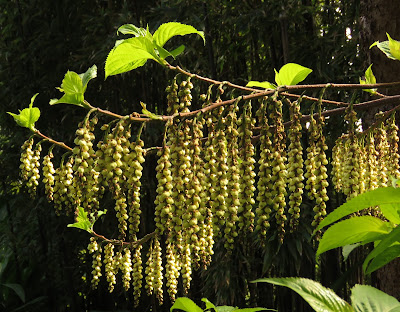 Using my misleading 'from a distance' identification skills I thought I could see a close ally of Garrya elliptica - the Silk Tassal - ahead as I walked through Burnley Gardens in late September. As I got closer it clearly wasn't but I struggled to remember what this plant was called, even its plant family (which can be a good way to narrow down the options, sometimes).

It's a species I do know but as Stephen Harris, from University of Oxford, tells us, this is one odd plant. So odd that its genus, Stachyurus, requires its own family, the Stachyraceae. In his Horticultural Flora of South-eastern Australia, Roger Spencer describes the dangling flowers of the Spiketail as 'looking like ears of wheat'.

Four of the eight species are found only in China (+/- Taiwan I should add), including this one, which I'm pretty sure is Stachyurus chinensis. In nature this species is widespread at the edge of forests, and like that other Stachyurus species found sometimes in Australian gardens, Stachyurus praecox from Japan, it begins flowering before the leaves appear.

Compared to Stachyurus praecox (and other) species, Stachyurus chinensis has rounder leaves, a longer chains of flowers, and the male and female bits held within the petals. Although Christopher Grey-Wilson and Phillip Cribb in their Guide to the Flowers of Western China note that sometimes these two species are considered one and the same. 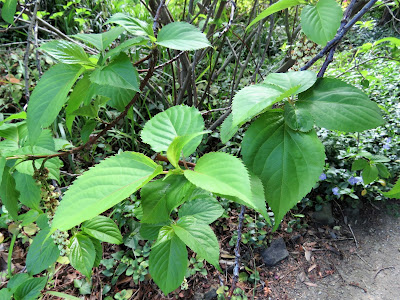 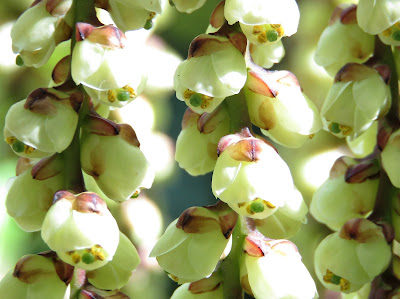 The species name 'praecox' refers to its early flowering, making it a good indicator of sprinter. This species, from China, flowers later and was powering through to sprummer (mid-spring) when I saw it in late September. 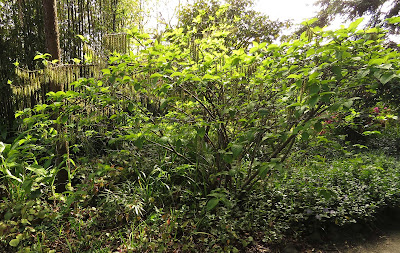 Originally Stachyurus was included with Camellia in the Theaceae, and later considered to be close to the Hamamelidaceae (with things like Witch Hazel, but also the Winter Hazel, Corylopsis, which has a drooping chain of flowers) but it turns out to be more like the succulent with rotten-meat-smelling flowers, Staphylea, and an odd little family from middle Americas called the Crossosomataceae.

Anyway, a very 'special' group of plants, and the genus name 'stachyurus' refers - in ancient tongues - to the most distinctive feature of the flowers, their arrangement into a dangling tail.

In nature, apparently, flowers can be female-only or have fully functioning male and female bits. However even the ones that look like both bits are working and active, produce mostly pollen and behave like males. So out in the wild bees and flies are essential for cross fertilisation and seed production.

The plants I observed in Burnley Garden seemed to have flowers with juicy male and female bits, and then further back up the flowering tail, fruits that seemed to be setting. 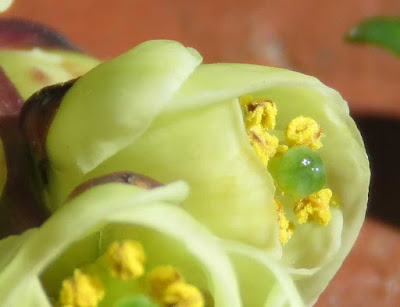 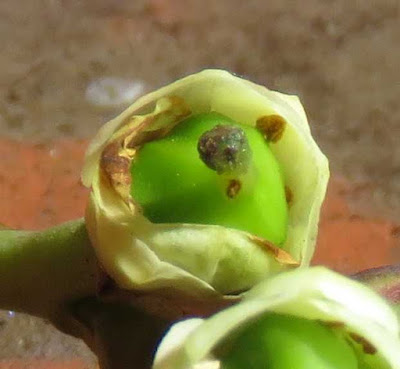 All that hidden within a veil of flowers caught in the morning sun. 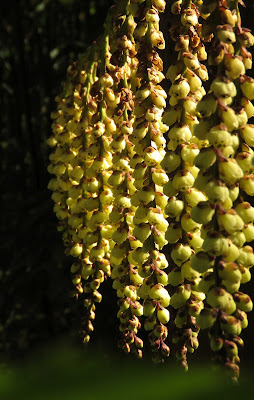 Leo Pemberton said…
Tim I really do enjoy your talking plants always illuminating and extending my knowledge without me having to do too much delving
Best wishes and keep up the good work Leo Pemberton
11:09 pm, December 06, 2016

Talking Plants said…
Thanks Leo. I enjoy writing these up and always learn something new myself. Very nice to get supportive feedback. Best wishes, Tim
7:31 am, December 07, 2016

Shona said…
What an excellent post - thank you very much for helping identify a small tree in a garden I work at in Hawke's Bay, New Zealand. I couldn't work out if it was the Garrya (Silk Tassal Tree) or Stachyurus. Thanks to your description it must be the latter. Looking splendid at the moment with its lush green foliage and hanging chains of flowers.
6:31 am, October 18, 2018

Talking Plants said…
Thanks Shona! Very pleased to be able to help. Such a pretty plant when in flower...