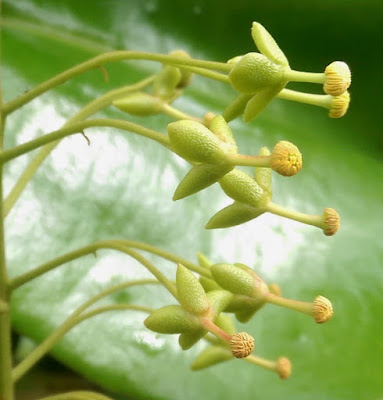 I have little interest in rodents eating plants with unattractive* flowers, but I'm intrigued by plants that eat mice, whether or not they have showy blooms.

In this case the plant is Nepenthes truncata, one of the world's bigger pitcher plants. The mouse is a house mouse but that's not the point of this post. Let's just say the pitchers on this pitcher plant are large enough to - and have been proven to - catch a mouse. Whether the plant really wants such a large mammal in its digestive system is unclear.

We grow a single specimen of Nepenthes truncata in our dinky Tropical Glasshouse at Melbourne Gardens. It's a large plant, many years old, and in early September it was in full flower. 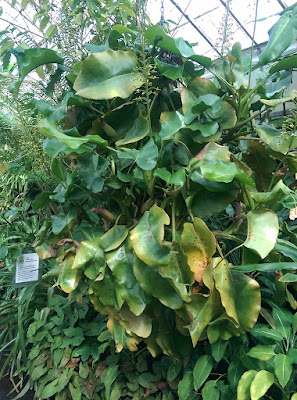 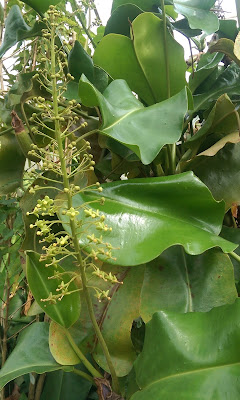 Not a flower to brighten a room perhaps but you might think at least we will soon have fruits, and seeds, and possibly a nursery fully of baby pitcher plants. Well, that isn't going to happen. Take a close look at these flowers and you'll notice they seems to consist mostly of a brain-like yellow sphere on a short stalk. Those yellow bits are the anthers, containing pollen. 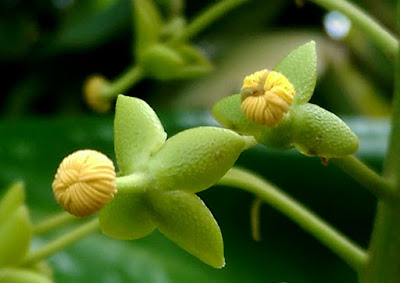 What's missing from these flowers are the female parts. To find those you need another specimen, and the right kind of other specimen, of Nepenthes truncata. This species, like all Nepenthes, has either male or female plants, and not both. Great for cross-pollination and encouraging genetic mixing and diversity, but rubbish for horticulture.

That said, you'll find this species relatively commonly in a carnivorous plant enthusiast's collection. That's presumably because seed is readily available, even though hard to move between countries due to the constraints of CITES - the Convention on the International Trade in Endangered Species of Wild Flora and Fauna.

The reason for the CITES ban is (as Carlo Ballistrieri from New York reminded me when this story was first posted) because trade in an organism could lead to the species becoming rare and threatened, or more so, in its natural habitat.

This species is already rare in nature, growing naturally only in lowland (230-600 metres above sea level) forests of north-eastern Mindanao, in the Philippines, where it scrambles through jungle vegetation. It was named from two fragmentary collections and is still poorly known in the wild, supporting its listing as Endangered in the Red List of flowering plants.

Our plants are flowering well, if not attractively or successfully (in terms of the reproduction), but the mature pitchers are now fading. Once the plant has got over it's unfulfilled flowering, it can reinvest in the new pitchers just starting to form on the tendrils at the end of its younger leaves. 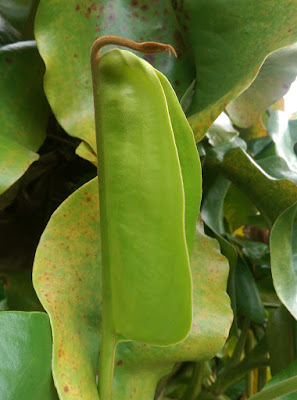 * I'm sure Hervé (a Parisian botanist) won't mind me repeating this short exchange we had by Twitter today (25 October 2016). He is quite correct!

@hsauquet_upsud
.@TimEntwisle unspectacular is a big claim! These flowers look pretty amazing and very unusual to me!

@TimEntwisle
@hsauquet_upsud It's amusing you should say that. Each time I look at the photo now I agree! In the glasshouse they looked rather plain...
Email Post
Reactions:

Talking Plants said…
I think the flowers are now gone but worth a visit to see if other plants are flowering anyway, if it's easy to get to. Tim
9:02 am, October 25, 2016

Talking Plants said…
I think the flowers are now gone but worth a visit to see if other plants are flowering anyway, if it's easy to get to. Tim
9:02 am, October 25, 2016