Trim and attractive to gnats 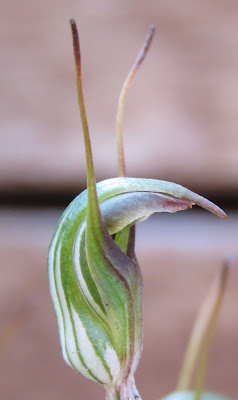 A couple of months ago I spoke to the enthusiastic volunteers who run the plant nursery of the Friends of Warrandyte State Park (or FOWSP as they like to be called). I spoke to the Fowspians about the kind of seasons I'd like to see in Australia. Not changing the climate itself - others are doing that more effectively - but how we might better reflect our local climate with seasonal names and durations.

My plan, as I'm sure most of you by now, is to swap the Vivaldian seasons for sprinter (August to September), sprummer (October and November), summer (December to March), autumn (April and May) and winter (June and July). We are now in mid-sprinter - Australia's early spring - and already wattle flowering has peaked in much of southern Australia. The native orchid season is well advanced, although there are many waves to this flowering cycle.

While talking up my seasons in Warrandyte, I was reminded of the very similar Middle Yarra seasonal calendar, started by Alan Reid, adapted by Glen Jameson and later further fine-tuned by Beth Gott taking into account local Indigenous knowledge. The reminder came in the form of a box of giant yearly calendars marking off the six seasons, and the presence of Glen himself in the audience!

So for at least some in the audience I was telling them what they already knew, with a little extra vocabulary (sprinter and sprummer in particular). In thanks for doing this I received this bowl of greenhoods, a group of mostly winter and sprinter orchids (almost entirely winter-sprinter I think if you support separating out particular greenhoods such as this one into their own genus - see below...). 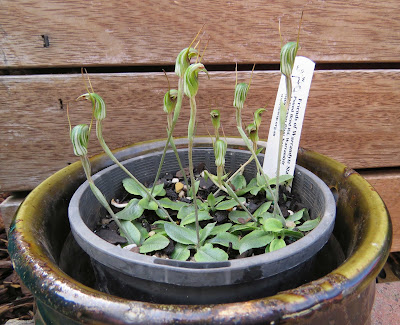 My talk was in late July - winter in both Vivaldian or Entwislean systems, although 'deep winter' in the terminology of the Middle Yarra. The greenhood was Pterostylis concinna, illustrated here a few days later at home.

I include the time scale because between the talk and home the pot upturned. The flowers and their basal leaves, and their roots and tubers, all lay beneath a pile of potting mix on the floor of my car. I resisted the urge to grind the tubers into flour, and mix myself a brew of salep (or sahlep; something I must - I will - post on in its own right), a Turkish drink that should perhaps never be drunk due to its impact on rare local orchid species. Instead, back at work I picked up the pieces and replanted most of them. Surprisingly, they survived the turmoil and continue flowering in my backyard (although they are now in their final days)

And so why do these flowers look like they do? Their common name is Trim Greenhood, and even after their disruptive car journey they remained just that - trim and neat, and with a green hood. The species name concinna is Latin for neat. It's a common enough species in Victoria, and one that is hanging on in the outer suburbs of Melbourne (e.g. Warrandyte). 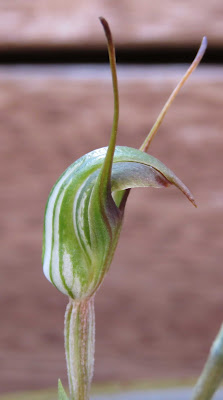 This all works as a trap for gnats who then have to crawl out past pollen grains (not in a sticky mass called a pollenia, which is found in many orchids) and the receptive female part of the flower. If all goes well for the Trim Greenhood the insect visitors take pollen from one flower to another.

Some authors like to call this species Taurantha concinna, considering the greenhoods to be more than one genus and this particular one (the 'Bull Orchids') including those with no side gap between the hood and that bib I talked about, and a relatively broad lip with that mini-notch.

Whatever you like to call them my pot of greenhoods, an ecosystem disrupted in transit, was successfully relocated from the Middle to Lower Yarra, remaining trim and gnat-attractive right through to middle sprinter.

If want to grow plants sourced and propagated from the Warrandyte State Park area, the nursery is somewhere you might visit on a Thursday morning (9.30 am to 12.30 am) or the first Saturday and Sunday of the month (9 am to 1 pm on Saturday, when you can also drop in at the Warrandyte Market or 2pm to 4pm on Sunday).

And thanks for my cousin Peta, and partner Jason Patton, for the invitation to talk!
Email Post
Reactions: