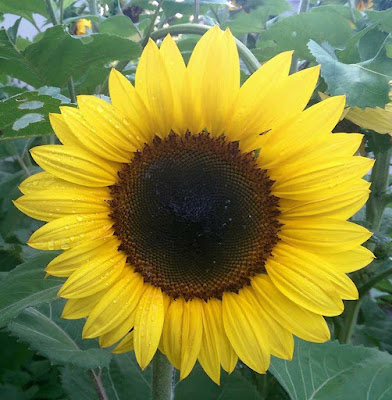 It's official! The flowering head of a sunflower arcs during the day in response to its own internal clock. No longer do I need to stare at sunflowers and ponder, as I did in 2009.

It's been known for at least a century or more that young sunflower plants (with their flowerheads unopened) track the sun from it rising in the east to its setting in the west, then get themselves sorted overnight so they can do the same the next day. Once the giant yellow flowerhead opens, it stops moving about and faces east. But why and how?

A University of California study published in the journal Science sets the record straight. Helianthus annuus has a circadian mechanism, or 'internal clock', behind its solar tracking, and then some internal signalling to position its mature flowerheads eastward. This combination leads to more vegetative growth and improved pollination.

The solar tracking is caused by different growth rates on the sunny and shady side of the stem. During the day the cells on the east side grow a little faster than those on the west, and then vice versa at night. 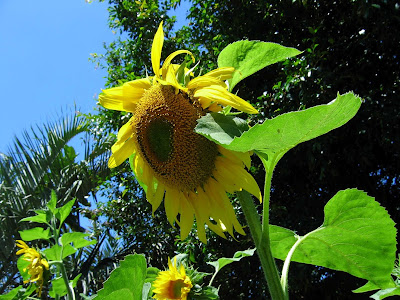 Postdoctoral fellow Hagop Atamian and colleagues at University of California in Berkeley,  tested plants in pots, growth chambers and in paddocks. Somewhat cruelly - if you think all this makes a sunflower sentient (which as it happens, I don't) - they staked some plants so they couldn't respond at all. Others were turned around each day to disorientate them.

The stalked plants grew less than those that could track the sun. If the light source was kept static (in growth chamber) the plant swept east to west for a few days, then stopped. This, they say, 'is the kind of behaviour you would expect by a mechanisms driven by an internal clock'.

If the played around with the length of the day they found the plant lost its rhythm at 30 hours, so the cycle has some constraints like a clock rather than just responding directly to daylight and the sun. Light is the primary driver for growth, but there is an internal clock (a circadian rhythm) controlled to some extent by the direction of the light, that causes the solar tracking. 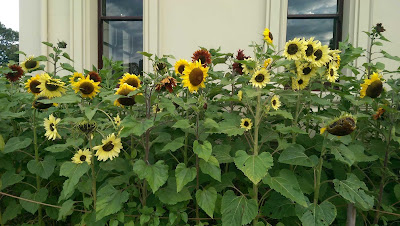 All this is controlled by genes and signalling chemicals called auxins (for more of the gory micro-detail, track down those references above). For those of you worried about the poor experimental plants constrained to face west every day, the researchers found that a portable heater quickly brought the pollinators buzzing back.

Images: sunflowers from Observatory Gate display in December 2014, plus the middle one from the beds near the National Herbarium of New South Wales at Royal Botanic Gardens Sydney a few year back.
Email Post
Reactions: