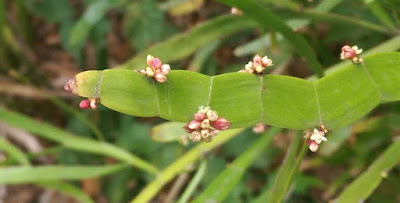 Centipede Plant, Tapeworm Plant or Ribbon Bush. Take your choice - we use Centipede Plant in the Royal Botanic Gardens Victoria. All of them are apt although I think it looks more like a tapeworm myself (having never actually seen one I must admit).

Its scientific name is Muehlenbeckia platyclada. The species name 'platyclada' is pretty good too, with platus old Greek for broad and klados a branch or twig.

Although at times Centipede Plant has been included in its own genus Homalocladium - due largely to it's distinctive jointed and flattened green stems - the work of Tanja Schuster (currently the Pauline Ladiges Post Doctoral Fellow at Royal Botanic Gardens Victoria and The University of Melbourne) and colleagues from Sydney (Hi Karen Wilson!) and the USA has demonstrated it sits comfortably in Muehlenbeckia.

The old genus name 'Homalocladium' means smooth branches and the current one, 'Muehlenbeckia' honours Henri Muehlenbeck, a early nineteenth century French doctor who had an interest in plants. 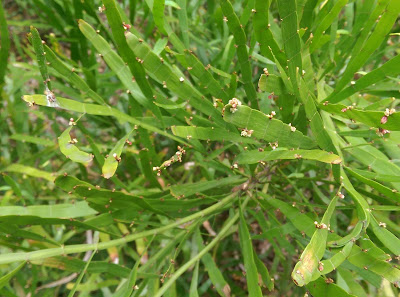 There are about 19 species of Muehlenbeckia, all from the southern hemisphere: South America and various small and large islands in the South Pacific, including Australia with 11 species. This one is native to New Guinea and Solomon Islands.

It has an unmistakable form. The flat, jointed stems (when mature) do most of the heavy photosynthesis lifting with the arrow-shaped leaves sparse at the best of times and falling before flowering. While usually an unruly tangle of a bush I gather it can be coaxed into a hedge. 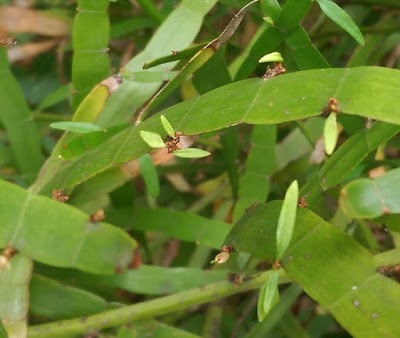 The flowers are small and white or green, and the berries smallish and red. 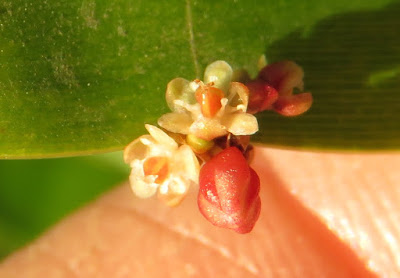 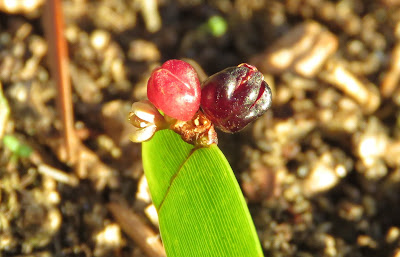 If you are familiar with other Muehlenbeckia species, the small flowers and berry-like fruits, and the simple tangled construction won't be a surprise. There are six species in Victoria, one possibly extinct and most quite rare within the State*. Muehlenbeckia adpressa, the Climbing Lignum, is the most common and found in nearly all coastal areas as well as the Grampians - it's a twining plant with larger untidy leaves.

More familiar might be Muehlenbeckia complexa, from New Zealand, which is sometimes called Maidenhair Vine - it has small circular leaves on wiry stems that can successfully obscure old fences and backyard rubbish (leading to alternative common names such as Mattress Vine and, in the UK, the geographically challenging, Australian Ivy). Although tending to weediness and established in native bushland in Western Australia, it seems to only persist only around old gardens in Victoria.

Centipede Plant itself is a little weedy in New Zealand, but then what isn't! And to be fair is seems to be limited in distribution. It has however become more of a problem in tropical areas of Asia and South America and in the latter seems to have been incorporated readily into traditional medicine where it is used to heal wounds: controlling pain and inflammation, and killing infecting bacteria. Various studies over the last decade have demonstrated the presence of active medicinal compounds in the stems and leaves of this species, at least some of those plants sourced from South America.

As non-subscriber to the Doctrine of Signatures, I'm less convinced by its reputed application specifically to bites by centipedes, except in the sense it would work on any break, inflammation or infection to the skin. You may as well recommend that it be ingested to expunge a tapeworm (don't do this by the way, it's undoubtedly poisonous), or somehow be applied to the unknotting of a particularly tangled ribbon (although as also a member of the knotweed family, Polygonaceae, it could just make things worse..) 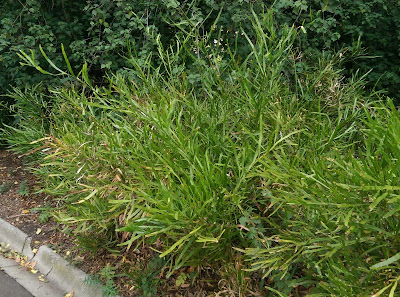 *Neville Walsh (30 August 2016) informs me that the 'possibly extinct' species, Muellenbeckia gracillima, was in fact rediscovered near Cann River in 2002.
Email Post
Reactions: