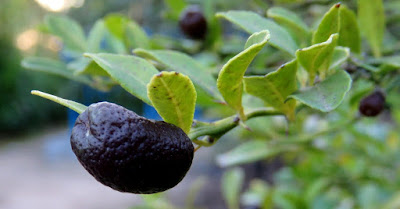 This clotted-blood-like fruit is an Australian bred citrus growing in our Australian Garden at Cranbourne Gardens. It's an example of the dozens of new citrus cultivars available now with at least one of their parents a local species (you might have caught Angus Stewart singing their praises on the 25 June episode of Gardening Australia).

When I last posted on citrus I was announcing that a large number of Citrus species are native to our part of the world. That part is Papua New Guinea, New Caledonia and Australia, where you'll find half of the world's 25 species of Citrus. One of those local species is the appropriately named Citrus australasica (the Finger Lime), a parent of this black dimply fruit. 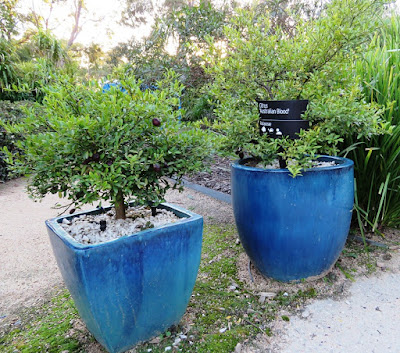 According to one of its growers, the plant was selected by CSIRO at Merbein in 1990. Like many citrus, the skin colour of the fruit is variable depending on growing conditions and maturity. In this case it can be gold with red markings or fully blood red. The ones I photographed were a little more like congealed blood, or at best a dried burgundy-blood colour. Inside the flesh can be lime-coloured (as these were), or partly or fully red. 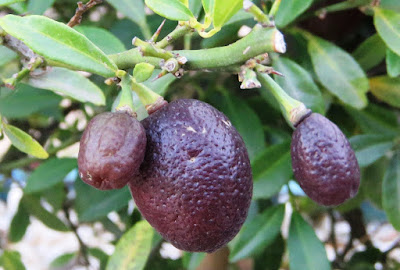 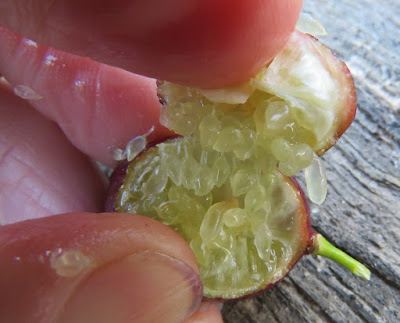 It tastes like a lime, with that appealing popping sensation as you crush the 'vescicles' of juice, as in a Finger Lime. Also like the Finger Lime, the bush is a little spiny.

Australian Sunrise is another cultivar we grow in the Australian Garden, and it too has the Finger Lime as a parent, this time the non-red variety. The fruit and plant look very like the Australian Blood and that's because the other partner is the Calamondin which, as I mentioned in my previous post, is a  hybrid between a mandarin and a cumquat (not miles away from the Ranpur Lime).

Australian Sunrise is what the breeders call an 'open-pollinated seedling' from the hybridisation of those two parents, a thing itself called Faustrimedin. Anyways, this one produces fruits with orange or golden skin (as below), and sometimes a second crop each season with duller and greener skins. 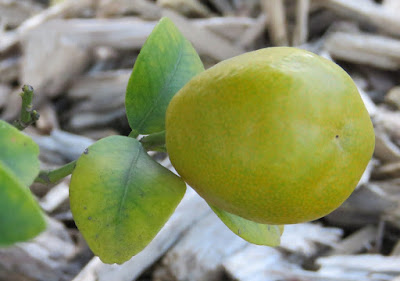 In older literature you might see the Australian citrus classified in genera such as Eremocitrus and Microcitrus but these days we include all the citrus-like species in Citrus (although there are still a couple of more distant citrus relatives put in other genera).The Australian Plant Census lists nine species and five formally named hybrids from Australia, including of course Citrus australasica, the common element in the two cultivars I've featured today.

The first Director of Royal Botanic Gardens Victoria (when it was named otherwise), Ferdinand von Mueller, described this species in 1858 from a collection made at Moreton Bay in Queensland. The natural distribution of this species is clustered around Moreton Bay, and Brisbane, where it grows in wet and dry rainforest near the New South Wales/Queensland border. The variety sanguinea was described by Queensland Colonial Botanist, Frederick M. Bailey, in 1892, from Tambourine Mountain. I don't know if it occurs in naturally in any other locations.


Australian species tend to be more drought, salinity and disease tolerant that other species of Citrus and they hybridise relatively freely with many other species and hybrid-species. This makes them ideal candidates as rootstocks, and for grafting onto other successful rootstocks. Those selections with unusual fruit colours, shapes and flesh textures - such as many of the Finger Lime crosses - are becoming ever popular with a market forever it seems in search of something new to eat.
Email Post
Reactions:

Talking Plants said…
Keep up the water, no competing ground cover and, where you are, some protection no doubt! Keep trying and thanks for comment. Tim
4:42 pm, August 28, 2016

Talking Plants said…
They are grafted plants, so need to buy whole rooted plant from nursery. Should be able to track down on line. Tim
6:44 am, October 02, 2016

My experience with both these species is that while they grow and fruit well on the Mornington Peninsula they grow very little when the weather is cooler. I have espaliered my finger lime so I can harvest them without injury from the spines and have learned not to train the plant until the weather has warmed during the Spring. @Tim does this match with your experience?
1:03 pm, October 03, 2016

Talking Plants said…
Hi David, I think that's right - they don't like the cold winters much. I've had one at home since autumn and it has done nothing until the last week or so. Finally some new growth. So I'd agree with the winter lull. Same seems to be true for the ones at Cranbourne Gardens. Tim
1:07 pm, October 03, 2016

Unknown said…
Do any of you know of a source in the U.S. for the "Australian Red Lime"? Or someone there who has these seeds and can mail a few? I would be happy to pay all shipping charges. It is advertized in the "Logee's" catalogue, but for some stupid reason the can't ship it to Texas - probably because they are afraid somebody might compete with the Tx citrus industry! In any case - I would be very happy to buy some seeds and try o grow my own That should also obviate the excuae about "disease transmission". One note, though, I am sending this from my cell phone, it is my only available "device", I am a "Senior Citizen" who is not terribly knowledgeable about computers, so I would appreciate if you adjust expectations accordingly. TKS for any help. Lynne W.
11:59 am, October 03, 2018

Talking Plants said…
Sorry I can't help with a US source. Hopefully someone local can help. All the best with tracking one down! Tim