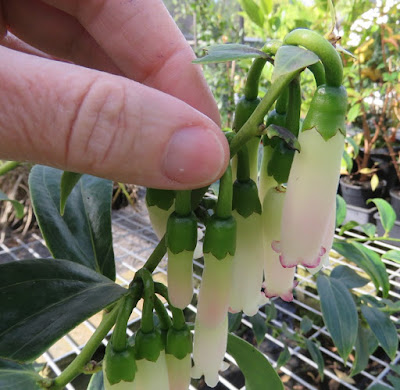 This rather exotic heath, with flowers and fruits like a pumped-up blueberry, is four years old. It was propagated from a cutting by our nursery horticulturist Dermot Molloy. Until a month or so ago we hadn't confirmed its species name, although we knew it was a Papua New Guinean member of the heath family and, we were pretty sure, in the genus Dimorphanthera. 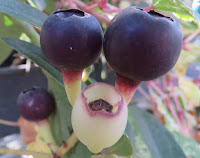 [Nearby in the nursery we have Macleania ruprestris, in the same family but from Chile, also with chunky bell-like flowers followed by a succulent berry. It's in berry at the moment - pictured to the side here - with some very small flower buds appearing at the branch tips. So with two species, we have the making of a fascinating collection!]

There are (or at least were in 2003) 87 species of Dimorphanthera, most of them native to New Guinea or nearby, a region that might be described as eastern Malesia. They are shrubs, small trees or sometimes lianas, but no matter their life form, they tend to climb or drape themselves over other plants. Those plants include relatives in the heath family Ericaceae, such as Rhododendron and a genus more similar to Dimorphanthera, Vaccinium (including species that gives us cranberries and blueberries).


Now, let's tease one of those flowers apart... 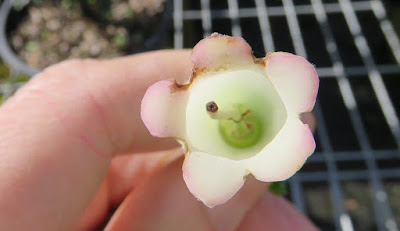 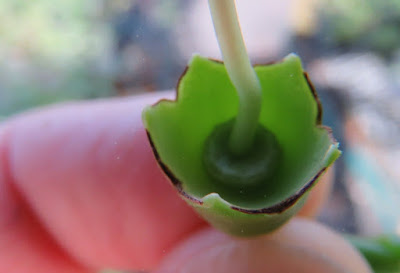 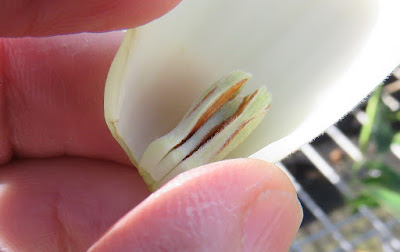 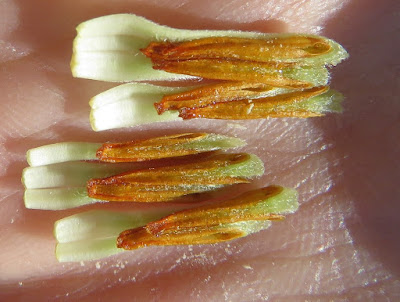 The name 'dimorpho-anthera' refers to the flowers having two different kinds of anthers, the pollen-bearing male bits. Typically half of these almost woody anthers are bigger than the other half. In the flower I pealed open the anthers all looked pretty much the same but they tend to be in pairs with one longer than the other and with the green bit extending beyond the brown strips either double or singly pointed (most obvious in the bottom two in the picture above).

Apparently such an arrangement is an attractive, or at least productive (for the plant), proposition for visiting birds, which seem to be the targeted pollinators. Mostly I suspect they are just curious about what's inside the fleshy, porcelain-coloured tube. 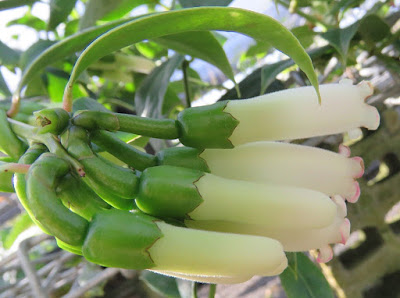 Our first Director, Ferdinand von Mueller, devised and applied the name 'Dimorphanthera' to this group of plants, firstly in 1886 as a subgenus of Agapetes (although not adequately, and a later author, Carl Georg Oscar Drude had to rectify it to meet the needs of botanical nomenclature).

In 1890 (above), Mueller raised Dimorphanthera to genus level in the second volume of his notes on Papuan plants, again rather ineffectively (you see various renderings of the 'authorities' for this name, including Johannes Jacobus Smith as fixing up Mueller's genus name attempt).

So that's the genus. Our horticultural botanist, Roger Spencer, has now confirmed the genus and given it a species name: Dimorphanthera alpina. The shape of the green calyx at the base of the flower, the size of all the floral parts and the colour of the floral tube (the fused petals) all match this species. As do the rather cryptic black spots on the edge of the leaf, which you can (just) see in the following picture (along with an unopened flower bud). Roger confirmed these spots are actually small teeth, slightly embedded into the leaf margin.

To grow Dimorphanthera alpina it seems best to treat it like a Vireya Rhododendron, providing good drainage and protection from extreme cold (frosts). Although from the tropics, as its name suggests it grows at higher altitudes and will tolerate night temperatures down to around 10 degrees C. Like others in the family (e.g. Rhododendron) it likes acidic soils.

Royal Botanic Gardens Edinburgh has an extensive collection of Dimorphanthera, with 19 'taxa' (species, and categories below species like subspecies, varieties and forms) growing in 2012. Elsewhere it's not a widely grown genus. It should be. 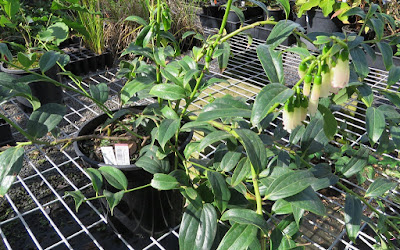 Digital Marketing said…
hi, nice information is given in this blog. Thanks for sharing this type of information, it is so useful for me. nice work keep it up. digital marketing company in delhi
4:43 pm, November 20, 2018

Digital Marketing Agency said…
Hi! I have more than 4 Years of experience and I am the Founder of a Website Development Company in Rohini, Delhi. I just want to say thank you for posting such a useful, impressive and a wicked article.
9:45 pm, November 20, 2018

Unknown said…
nice topic which you have choose.
second is, the information which you have provided is better then other blog.
so nice work keep it up. And thanks for sharing. Epoxy Grout manufacturer in delhi
10:26 pm, November 28, 2018

Mobile app development company in toronto said…
It’s really a cool and useful piece of information. I’m glad that you shared this useful information with us. Please keep us up to date like this. Thanks for sharing.
4:10 pm, December 14, 2018

NICE for giving a chance to share ideas for your comuty i really thanks for that great post.
Still Hunting Method
Hunting psych tips Survival Tips Travel Touring Tips

Thank you for such a sweet tutorial - all this time later, I've found it and love the end result. I appreciate the time you spent sharing your skills.
travel trekking tips
see the link Tent Camping 101 Exploring Smithriver