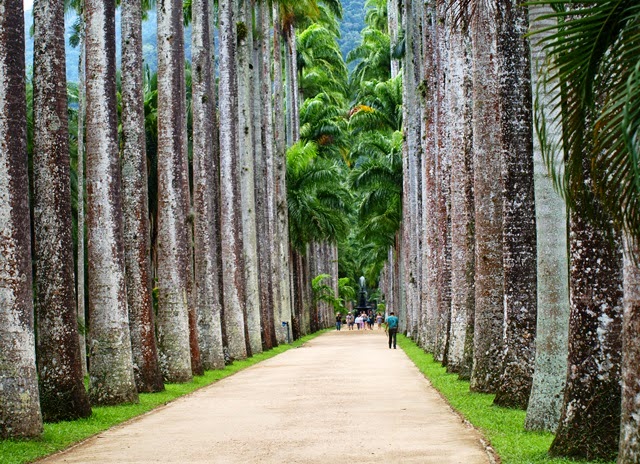 Over the next few months I'll intersperse my posts of locally found plants with those I discovered on my recent visit to Latin America. This travel was supported largely by the Charles and Cornelia Good Foundation, to provide the opportunity for me to develop as a botanic garden Director, learn more about world botanic gardens and spread the influence of Melbourne's own.

This first post is quick guide to the three botanic gardens I visited, in Brazil (Rio de Janeiro), Argentina (Buenos Aires) and Chile (Santiago). Later I'll extract intriguing plant species from their collections, or from trips made into a couple of parks and gardens in these countries.

According to all the locals I spoke to, botanic gardens are not as deeply embedded within the cultures of Southern America, or for that matter their historical European connections. Unlike the United Kingdom, North Ameria or Australia, for example, I was told that 'Latins' generally don't have a great love or attraction to plants or nature. They are more interested in human culture it's said. Anyway, these are three botanic gardens trying to change that. 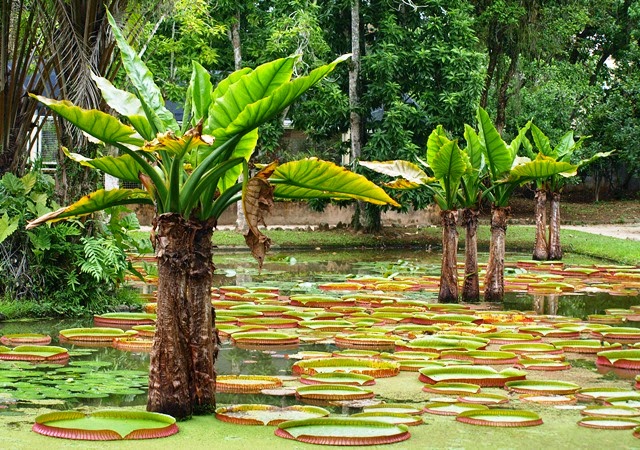 This 55 ha botanic garden (in a 137 ha property, the rest not open to the public) in Rio de Janeiro was established in 1808, making it the oldest botanic garden in the Southern Hemisphere I think, predating Sydney’s by eight years. There are no trees remaining from that original date but the famous avenue of Imperial Palms (Roystonea oleracea; pictured at top of post) is continually replaced using progeny of the original specimens – the oldest today is probably 100 or so years. Trees (and palms) are the most important part of this botanic garden; in fact they refer to it locally as 'The Arboretum'. There are elderly avenues of mangoes, cloves and those palms. Cannonball trees (Couroupita guianensis) line one path and important tropical crop trees such producing Breadfruit, Jackfruit and Rubber are scattered through the collection.

The garden started as an acclimatisation garden, created by Dom João VI, who fled to Rio in fear of being captured by Napoleon in the early nineteenth century. He secured the site for a gunpowder factory and a place to trial and harden plants from the West Indies. In time it evolved into a botanic garden (for a while being called the Royal Botanical Garden) and was made open to the public in the 1820s. Today it is an impressive collection of tropical species from various ecosystems in Brazil and elsewhere in the world.

The stands of giant bamboo, large amazon lily leaves on the ponds and the exotic flowers and fruits of the tropical trees are all stand outs. One of the signature plants in the 6,000 species collection is the Brazil Tree or Pau-Brazil Tree, Caesalpinia echinata (a genus of legumes well represented in the tropics). The country Brazil (Brasil) is named after this tree, or more accurately after the workers who harvested the wood from these trees, who were called were called Brasilians. (Interestingly, the former name of the region was Pindorama, meaning land of the palms.) The shade house collections, including many epiphytic orchids, are not as impressive as those in the Roberto Burle Marx garden (just out of Rio, which I also lucky enough to visit), but pretty enough. That said, the bromeliad collection (housed in what is called the 'Roberto Burle Marx Glasshouse') while not a stunning landscape display was rich and had great interpretation. Nearby an outdoor landscape of bromeliads has been created from plants saved before an area of Rio de Janeiro was cleared for housing development. A medicinal garden, within the walls of the ammunitions store, is informative and linked to creative displays of laboratory glassware and traditional plant products. 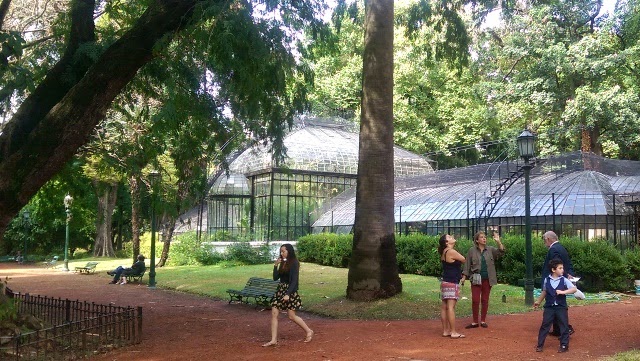 The entire garden is only seven hectares, with about 1,500 species and 12 horticultural staff. Established in 1898, it lies almost midway between the Rio and Santiago gardens in age, but experienced a period of grand neglect between 1930 and 2010. French architect Carlos Thays designed the layout, the broad outline of which remains intact today with some of his tree plantings (many of them too close now that they are mature). Apart from the rudimentary remains of some formal gardens, most plants are organised by geographical region, with an extensive Australian collection of eucalypts and other familiar trees and shrubs.

The flora of Argentina, and other parts of what is called the Southern Cone (Argentina, Chile and Uruguay), is well represented and the Director Garciela Barreiro is adding to this as she restores the garden. A particularly successful new addition is the butterfly garden, a collection of plants to attract butterflies and caterpillars, such as the Monarchs. While I was there the garden was flittering with butterflies, as well as attracting many other insects and one humming bird. There is a good collection of conifers, including the genus Araucaria with representatives from South America, Australia and New Caledonia (Araucaria bidwillii, the Bunya Pine, is commonly planted in public parks in Buenos Aires). I was impressed to see a large specimen of Chrysophyllum imperiale, a species growing in bothy Sydney's and Melbourne's Royal Botanic Gardens but now extinct in its natural habitat near Rio de Janeiro – I don’t recall seeing a specimen in that city’s botanic garden.

Another new addition, but with a link to the past, is a small crop of Ilex paraguariensis. This plant is the source of the local (non-alcoholic but apparently caffeine-rich) beverage, 'mate', which I'll post on separately. Something even more unusual is the presence of domestic cats, as well as bowls of cat food and water. Cats are so regularly dumped in the garden, volunteers have decided to feed and care for them then offer up for adoption. This is tolerated by the Director. 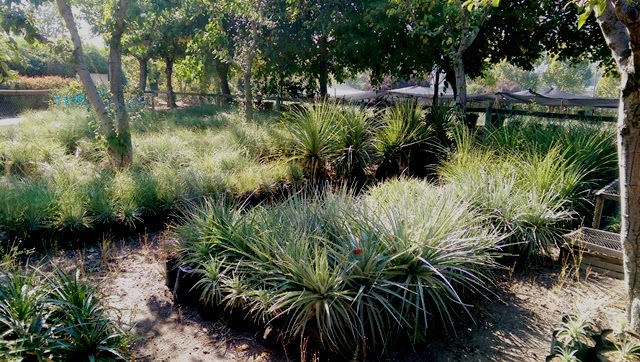 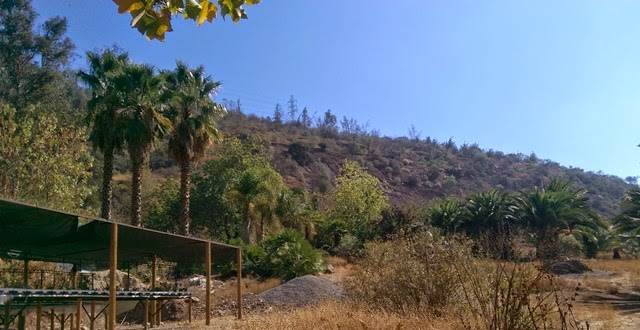 The setting for this very new botanic garden is in equal measure challenging and spectacular, with steep slopes set above the Santiago valley, with the Andes in the distance. Horticulturally it’s an extremely challenging situation due to the dry, clay soils, and the steep slope. Then there is the lack of support, yet, from the local government. With only 9-10 staff, five of them actively involved in horticulture and those without any formal horticultural training, it’s a struggle. At the moment the ‘botanic garden’ consists of an interesting collection of pot-bound plants in a nursery and a few scattered plantings out in the public areas. While technically open to the public now there is no front entrance or welcoming signage, and the interpreted collections are in pots bordering the nursery area. But there is great potential.

When completed the 44-hectare botanic garden will include plants from Mediterranean regions around the world, but with a strong focus on the local flora (including endangered and medicinal plants). Expect to see extensive displays of Chagual (pronounced ‘Cha-well’, in first picture of the two above), species of the bromeliad genus Puya, of which five of the known nine species are native to central Chile – you might be familiar with the giant flower spikes of Puya berteroniana*, with vivid blue-green flowers. There will also be Chilean representatives of various southern hemisphere genera we are used to such as Nothofagus and Araucaria, and displays of the Easter Island endemic Sophora toromiro (which is being introduced, after extinction in the wild, from seed held and grown by our own botanic garden). And of course Chilean Wine Palms (Jubaea chilensis, of more in a later post), which is widely planted in botanic gardens around the world, including a majestic specimen planted on the lawn behind the National Herbarium of Victoria in 1904 by the Government Astronomer, Robert Ellery.

The Royal Botanic Gardens Melbourne formed a partnership with Chagual a decade ago, just five years after it began, sending over Rodger and Gwen Elliot to advise on Australian plantings, and previous Director Phil Moors twice to advise on planning and strategy. My visit was to reconnect and continue that relationship.

*Postscript: According to a 2013 taxonomic revision, I gather Puya berteroniana (or P. X berteroniana) in cultivation is most likely to be Puya alpestris ssp. zoellneri.
Email Post
Reactions:

Anonymous said…
Thanks for another informative piece Tim. Theres a few mentions of species that are extinct or near extinct in their natural range which are represented in the rbg collection. Can you provide a bit more insight into other plants in the rbg collection that are extinct in the wild, perhaps Ginkgo being an example? I haven't scanned the archive but perhaps a future blog topic. Cheers Rob Dabal
7:37 pm, April 14, 2015

Stuart Read said…
Oy, que fortuna timoteo, para visitor estas jardines maravillosas de America latina! Thanks for some insights and look fwd. to more to come. Monkey puzzles, puyas, coquito palms, it's a wonder las Latinos are not more interested in their natura. Ecologists like Rudolf Thomann and landscape architects like Juan Grimm in Chile are helping bridge that/grow that a bit I think. And Senor Burle Marx, RIP

Talking Plants said…
Thanks Rob and Stuart. Rob, a famous example in the RBG Melbourne example is the Easter Island Toromiro (Sophora toromiro) which I was thinking of writing about given it's connection to the gardens I visited in Chile. Ginkgo is a curious one where we are unsure whether there is a native population in one part of China or not (probably not). Will include in my list! Stuart, yes all those species and odd there doesn't seem to be the same passion. I visited the Burle Marx garden south of Rio - a real treat! Tim
8:20 pm, April 14, 2015