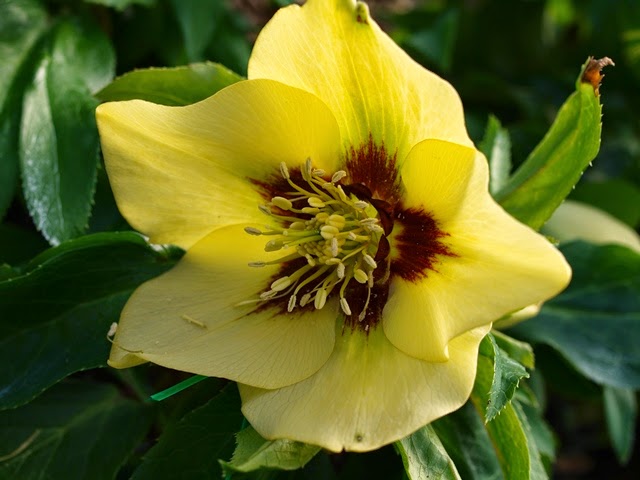 Most hellebore flowers have no petals. My wife Lynda discovered this in her weekly botanical art class with Mali Moir run by the Friends of the Royal Botanic Gardens.

When you paint a flower, with accuracy, you tend to pick up details like this. To be fair Lynda had to seek professional advice on whether the ring of coloured flaps around the crowded stamens (the male bits) and nectaries were petals, sepals (the next layer outside) or perhaps bracts. My professional advice was that yes they most certainly were one of those and we should find some reliable reference.

The hellebore, or Winter Rose, is in the buttercup family, Ranunculaceae, so around the cluster of stamens you would expect to find petals. Instead there are a these odd cone-like structures. 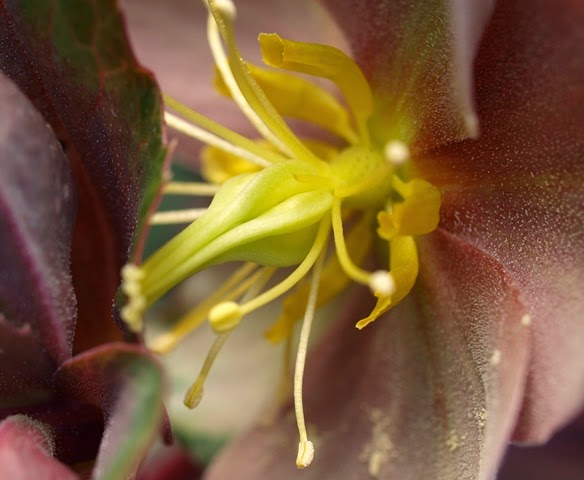 This ring of nectaries, or honey leaves, is found in all wild species today. They resemble olympic torches or, as colleague Neville Walsh prefers it, ice-cream cones, and they contain sweet, bee-attracting, nectar. Here are a few more. 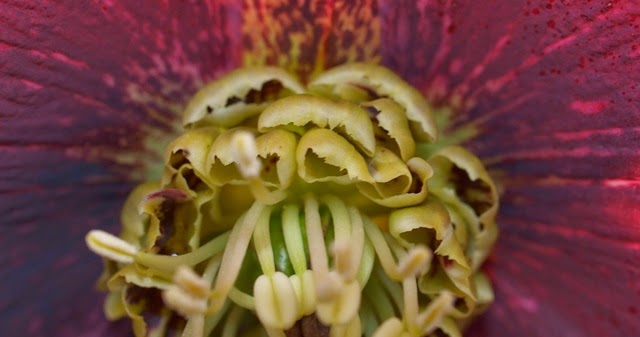 In the original hellebore flower these cones (or torches) were presumably petals because they are relatively easy to convert back to a pretty layer or two of these according to the owner of Post Office Farm Nursery in Woodend, Peter Leigh. His half hour tour of the nursery on the weekend was fascinating and revealed lots of variation in the nectary-come-petals, including these so-called anemone flowered hellebores which seem to be undecided. 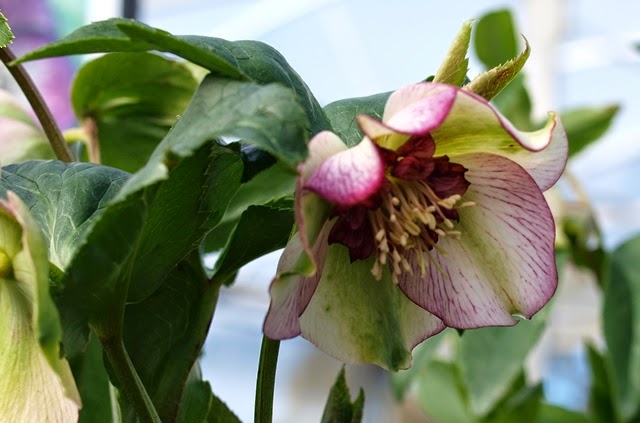 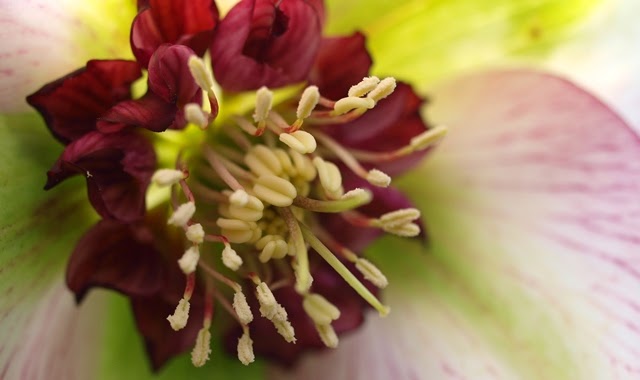 To propagate hellebores you either divide the plant or collect seed. Dividing is slow and doesn't give you many plants. Seed can result in unwanted variability. So Peter Leigh hand pollinates plants in a bee-free shade house. This way he can keep the cultivars he likes as well as experiment a little.

It's a slow business. These seedlings only emerge nine months or so after the seed has been sown. The seed has to be sown fresh and then kept moist for that entire time. It will be another two years before they flower. Like this Helleborus argutifolius from Corsica, with nectaries as you can see. 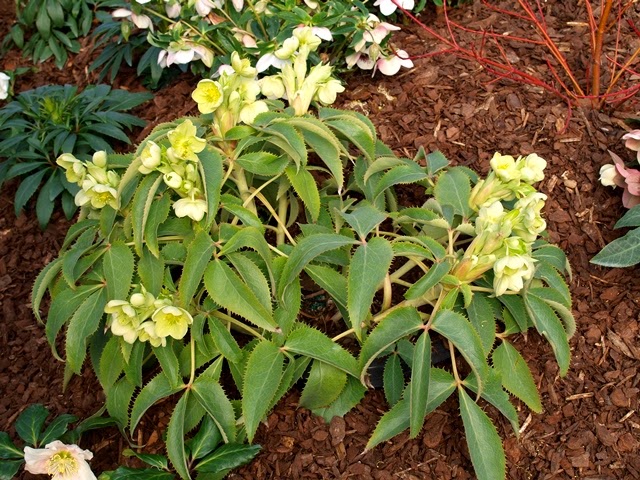 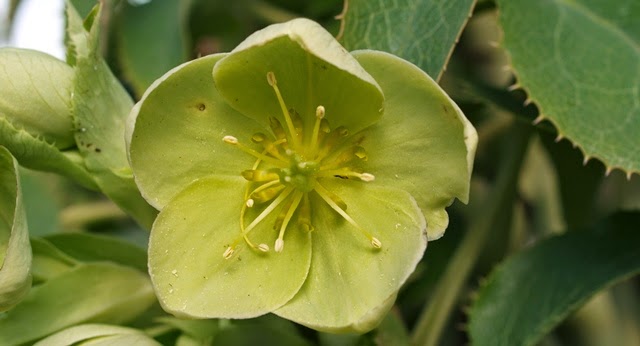 Nearly all hellebores come from Europe and nearby Asia. There aren't many of them, maybe 17 species in total. There is this (next picture) single species from China, Helleborus thibetanus, from high mountains in the central part of the country. Unusually the plants are deciduous, in that they lose their leaves and become dormant after flowering. Although discovered by botanists and named in the nineteenth century this species only made it into cultivation in the UK in 1991 and presumably into Australia soon after. 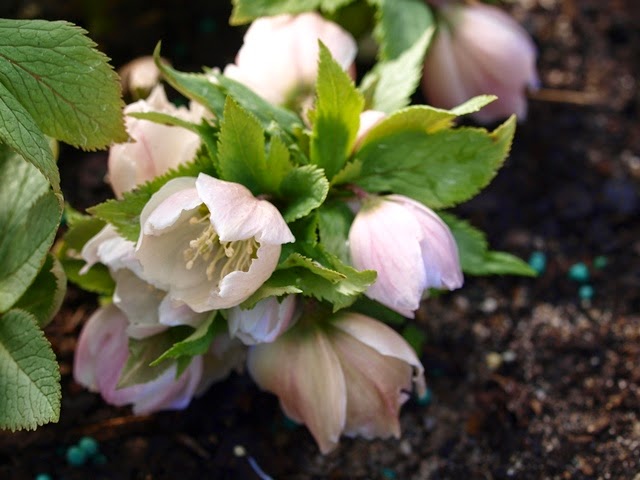 To answer the original question, the big showy flaps on these flowers are sepals, the layer usually found outside the petals and often green in colour. In the hellebores the sepals do all the attracting of pollinators, along with cones full of lovely nectar. Except of course when breeders like Peter revert the nectaries back to petals.

To finish, a couple of hellebore flowers showing off their colourful sepals, one with cones, one without. The latter, you'll notice, has yellow petals that you and I would now most likely mistake for sepals. 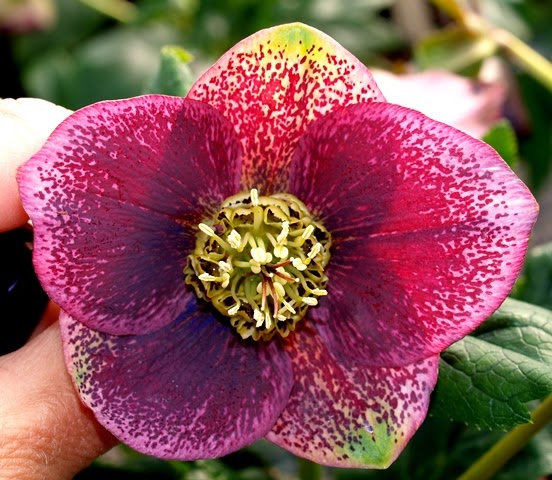 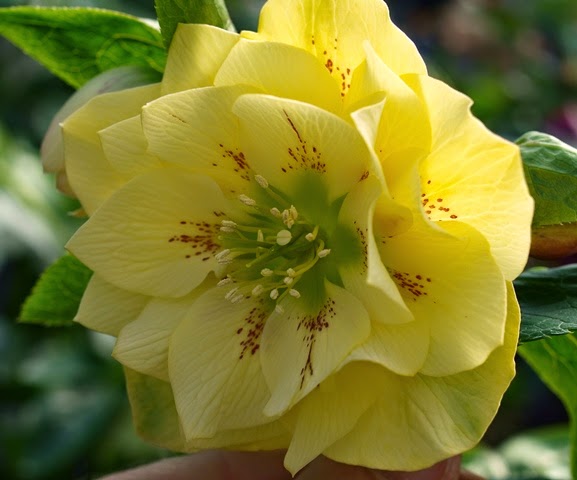 Natalie Green said…
I wonder how many of these you would have to grow to get your own supply of honey for the family.
8:43 pm, August 08, 2014

Talking Plants said…
Too many! Good for bees but I think a eucalypt or similar would be better for feeding the family on honey... Tim
9:14 am, August 10, 2014