Singapore: a City, in a Garden, by the Bay 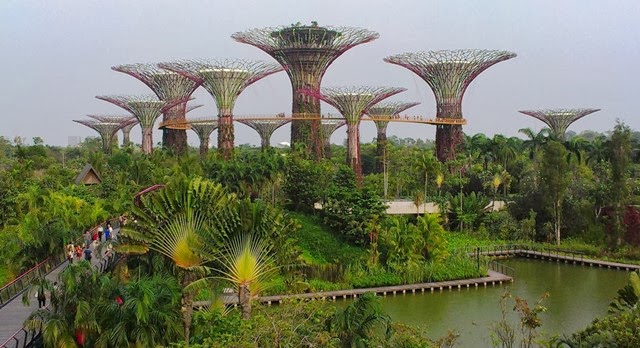 Like the Australian Garden at Royal Botanic Gardens Cranbourne, this is a garden designed to provoke. Singapore's Gardens by the Bay isn't your typical urban park. It's the flagship project for the Singapore National Parks department who set themselves the ambitious and tantalising vision of creating a City in a Garden.

The total area of the three public gardens at Marina Bay is 100 hectares – 2.5 times the size of Melbourne’s Royal Botanic Gardens or to use a more universal (if Melbourne is the universe) measure, 50 times the area of the MCG playing field. So it’s big.

Singapore, it seems, was after a cross between Central Park in New York and Kew Gardens in London. What they got was something entirely different, and all the better for it. An interesting distinction is made between these Gardens (by the Bay) and the (Botanic) Gardens uptown. Both are run by the National Parks department, but the former is for horticultural recreation, the latter (largely) for education, research and conservation.

This is perhaps not a surprising distinction but one that is not made often. Most botanic gardens around the world, including the three I've worked in (Sydney, Kew, Melbourne) would argue that they combine science, conservation and recreation. Not only would they argue this but their Acts usually obligate it and their actions actively pursue this agenda.

The Singapore Infopedia page on Gardens by the Bay says the Botanic Gardens ‘were being overstretched by the demands of leisure, research and academic usage’. I take this to mean they were either at capacity in terms of visitor numbers (or perhaps facilities to service those visitors) or, to put it bluntly, they couldn’t be made pretty or interesting enough due to the constraints of being a scientific garden.

This new project has been driven by former head of the Botanic Gardens and Singapore National Parks, Dr Tan Wee Kiat. Dr Tan is a fascinating cross-over himself, being a scientist expert in orchids who then led the transformation of Singapore’s parks from pretty green wallpaper to part of the everyday life in this very green city.

Chief Operating Officer, Kenneth Er, visited me in Sydney in 2006 when I was Executive Director of the Royal Botanic Gardens and Domain Trust. We discussed the Barangaroo project (I was on the Jury for the design competition), growing and displaying Australian plants in the Mediterranean glasshouse they had planned, and the planning and managing of parks and gardens generally.

In the end two UK companies won the international design competition for the Singapore project, Grant Associates to do the southern section and Gustafson Port to do some temporary work in the east; the central area was parked for later. Construction began in late 2007, with the opening of Bay South in 2012. Just over a year ago Linda Green posted an excellent assessment on GardenDrum, noting that 'the Australian garden is one of the healthiest that I have seen outside of Australia but it is early days yet'.

Now, nearly two years after the grand opening, I finally got there. With support from the Charles and Cornelia Goode Foundation I was able to travel to Singapore this week. On Saturday afternoon I made my first visit, waiting until dusk to see how it was transformed at night (it closes at 2 am). Then yesterday Kenneth Er met me for a guided tour of the outdoor gardens and two large glasshouses.

I was lucky to have a tour led by Kenneth. Next week he becomes Chief Executive of Singapore National Parks (his current boss Dr Tan's previous job), looking after both Singapore Botanic Garden and Gardens by the Bay, as well as lots of parks and roadsides throughout the city.

Gardens by the Bay is a massive project, and expectations always rise with cost. The bill for the 54 hectare Bay South was around one billion Singapore dollars (just under AU$900 million at current exchange rates). They predicted visitation of 2.7 million a year, with a pay back time of ten years. In their first two years of full operation they have already had 8 million visits (60% tourists, 40% local).

Bay South has a simple goal: to attract people who don't normally come to botanic gardens and to get them interested in plants. The more you talk to people like Kenneth, as well as newly arrived Deputy Director of Research, Dr Adrian Loo, and Dr Tan himself, the more you realise they have loftier goals. All of them want people to appreciate plants, to understand why they are important and to teach people care for the environment.

Equally, all of them feel this can come later, and should come gently. The important thing is to use colour and drama to attract people and make them marvel at the plant landscapes. The first objective is to create 'a garden filled with colour and vibrancy throughout the year'. A close second one, according to Kenneth, is to make the garden comfortable: e.g. there are lots of covered walkways to protect from sun and rain, and the whole garden is raised up a few metres to catch the breeze.

There are two huge conservatories, the Flower Dome for Mediterranean climate plants (such as those from Australia), and the Cloud Forest, with plants from high altitudes around the world. Apparently there are 226,000 plants in the two conservatories combined, about the same number as we have in Royal Botanic Gardens Melbourne.

The  Cloud Forest is already a dramatic and enticing plant display. The way you weave up and down, and around and inside, the 'mountain', is brilliant. The plants are not exclusively cloud forest species and again the aim has been to provide colour and excitement. That said, there are some fascinating orchids and other plants (e.g. a beautiful collection of carnivorous plants with a venus fly trap in flower) dotted around and the plan is to introduce a garden of rare plants. These few pictures don't do the scale justice but you get the idea. 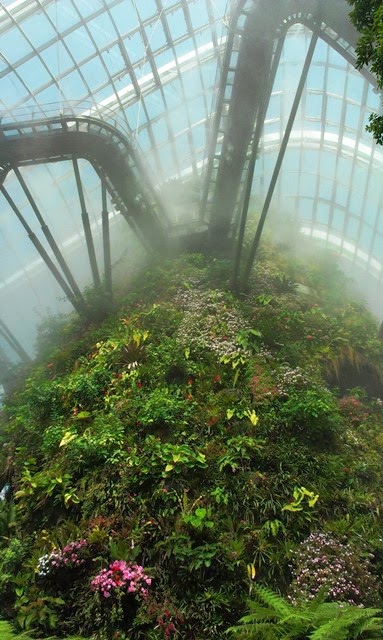 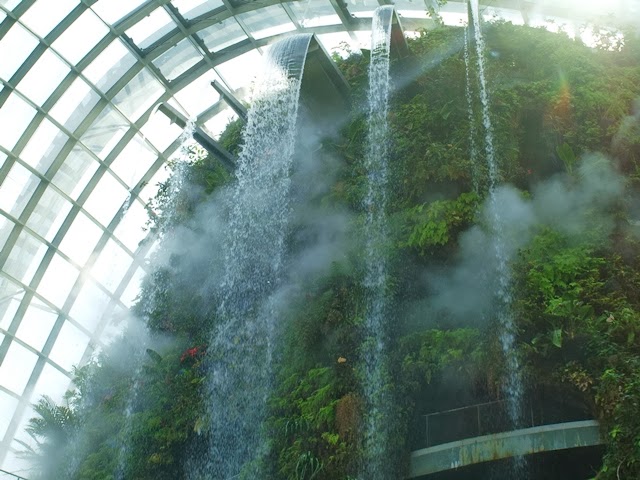 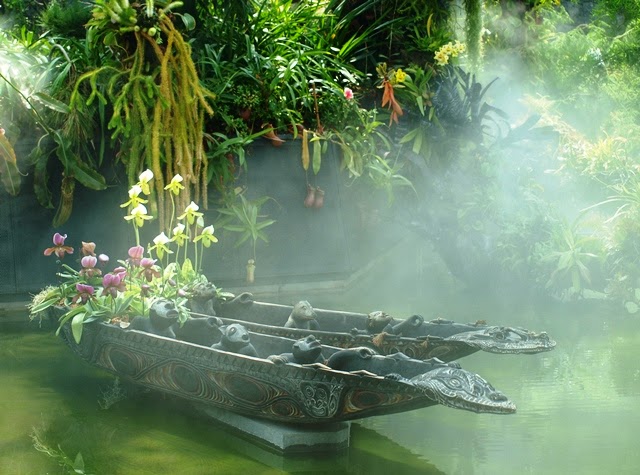 The Flower Dome is more subdued at the moment, and many of the large trees (boababs, olives) needs to settle in a little. There are regularly changing displays in the main foyer, at the moment a mix of temperate flowering shrubs and next up roses. The Australian plants are still in great health. It would be nice to supplement these with some of our more showy understorey species in time. Already Kenneth has been able to keep his kangaroo paws flowering almost continually for two years using adjustments to the night temperatures (they can zone the temperatures a little within the giant conservatory) and pH. 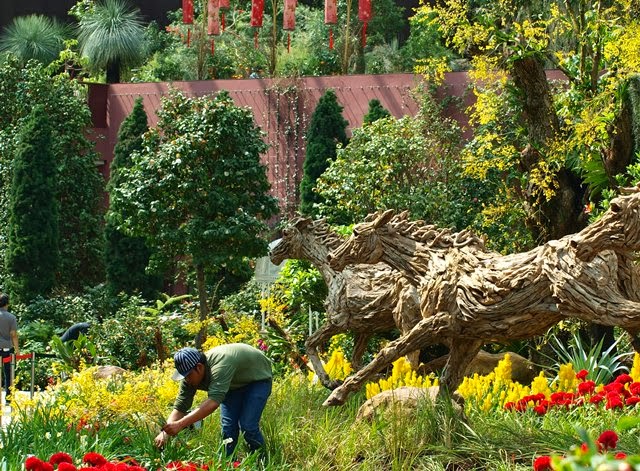 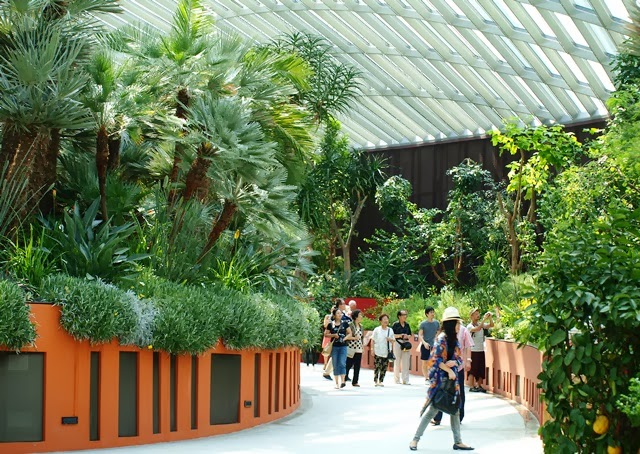 The most striking part of Bay South are the so-called Supertrees, 18 installations from 25 to 50 metres tall, inspired by the trees that emerge from rainforests. If you count the plants attached to these 'artificial trees' you'll get to about 163,000 I gather, with 200 different kinds of plants represented. These structures double as vents for the conservatories, carry solar panels for lighting them up at night, and another place to collect and harvest water. Some also include places for humans to eat! 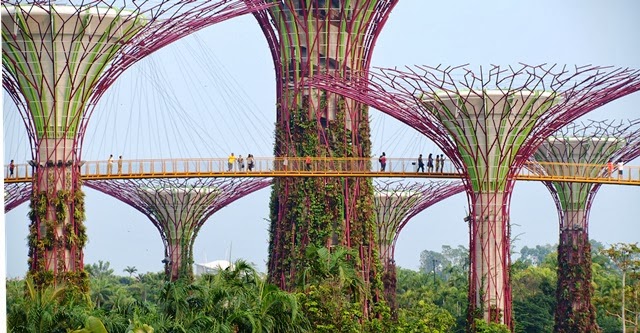 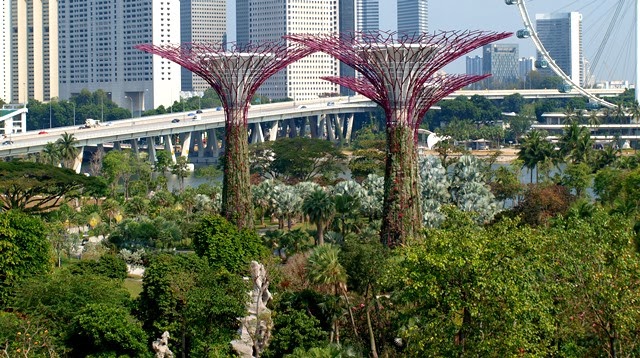 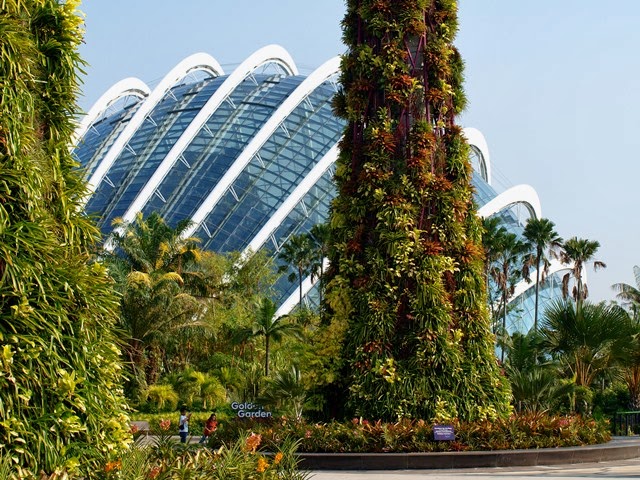 The energy to cool the conservatories comes partially from an underground biomass boiler (you'll remember I was intrigued by one of these - above ground - in Cornwall) fed with horticultural and other organic waste. The boiler powers a steam turbine, sending cool water through pipes at ground level in the conservatories. Warm air is vented out the top and a liquid desiccant dehumidifies the air to make it more efficient to cool. 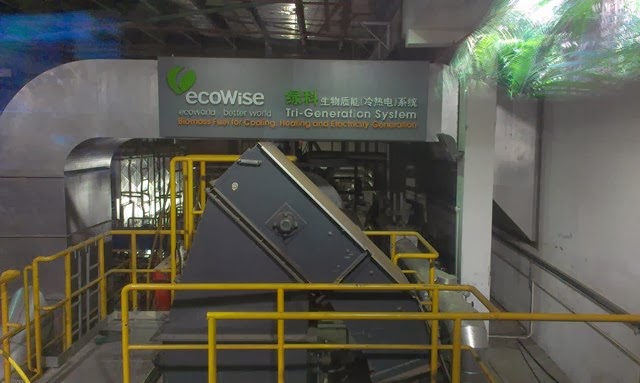 And there is more. Areas away from the public will be used as nature reserves. Already 91 bird species have been recorded, many of them forest dwelling birds not usually seen in the middle of city. There are butterfly attracting plantings and all the water features serve to store and filter irrigation water drawn from rainfall as well as the nearby Singapore River.

In summary, spectacular, inspiring and impressive. Every visitor will at least have to admit that plants can be cool (and not just in the glasshouses). In time there will be more plant labels, more plant information and even more creative interpretation (there is quite a bit scattered about already). There are already 500,000 different kinds of plants (species and cultivars) and diversity is important: the first major plant collection was 210,000 bromeliads from America and the development includes a research facility (HortPark) to help them learn how to grow plants not native to Singapore. 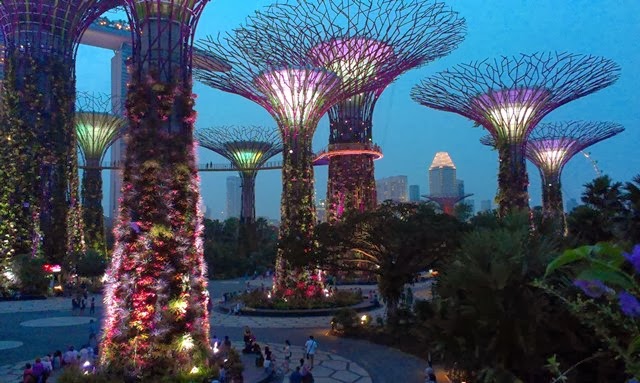 The whole site looks amazing at night as well, the evening attracting almost as many people as the day. This is the best picture I could get, but to finish let's return to the daylight of yesterday. For a place like this, pictures are far better than words. 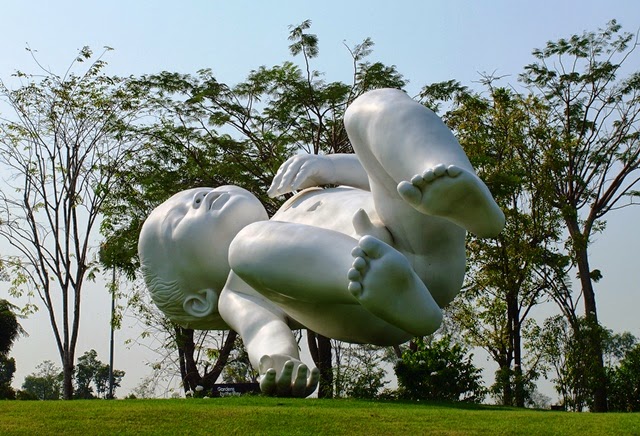 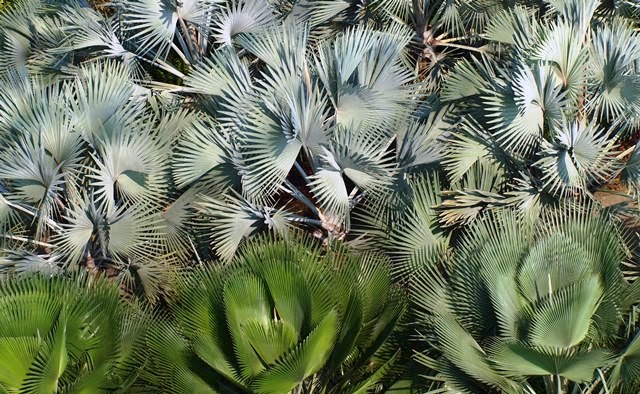 The final picture is of Kenneth Er and Adrian Loo in the Cloud Forest. My apologies to all the other staff I met who didn't make it into this picture. In particular the Director of Gardens Operations Ng Boon Gee, who took me for another tour after lunch, and for everyone who shared a delightful New Year banquet lunch hosted by Dr Tan.
Email Post
Reactions:

garry Z said…
I recognize the silver bizmarks. They are popular here. I finally got my hands on a few seeds but they never sprouted.
12:22 pm, March 17, 2014

Talking Plants said…
Thanks Garry - yes the Bismark Palms are lovely.
φυτωρια, if you have visited two years ago it's worth another visit!
6:57 pm, April 06, 2014