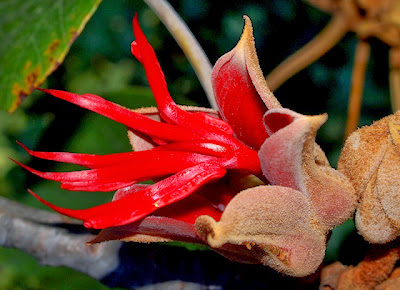 I mentioned this fantastic (in all senses of the word) plant in my late October blog post about Dunedin Botanic Garden. When I returned to Melbourne I found it in flower in my very own Royal Botanic Gardens, and when I bragged about it on Facebook I was told I would have seen it also in Sydney's Royal Botanic Gardens when that was my home territory. 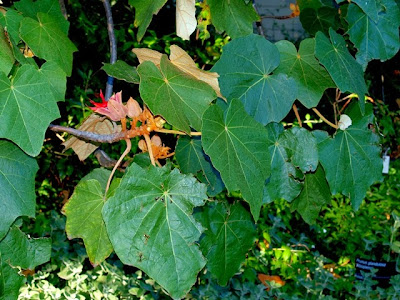 So it's not uncommon. But it remains fantastic. Just take a look at the flower and try and work out what is going on. The velvety outer surface of the flower is typical of its family Sterculiaceae, or a broadly circumscribed Malvaceae if that's your preference. The structure of the flower, though, isn't like any Brachychiton  or Lasiopetalum, typical members of this family (which also includes chocolate, Theobroma).

This is a picture of the Kurrajong (Brachychiton populneus), also in flower in the Royal Botanic Gardens. Not one of the hairiest members of the genus, or family, but you can see the cup-like flower which is a theme I'll return to. 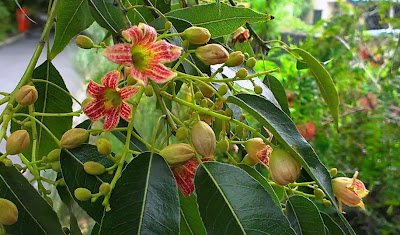 So clearly something looks like a hand! That something is actually the male part of the flower, a group of five stamens fused together at the base. In this picture each stamen is bearing a line of yellow pollen. 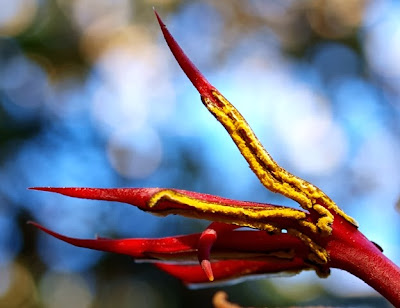 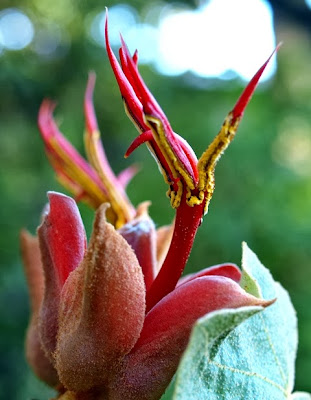 Between two of the fingers of this 5 cm long 'hand' you can see the curved stalk of the female part of the flower, the style. There is only one hand per flower. If you remove the 'hand', you are left with a cup of velvety petal-like structures called sepals, the outer layer of most flowers. The petals themselves are missing, as they are in most Sterculiaceae. 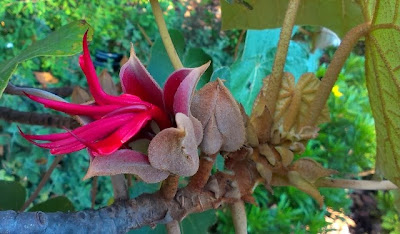 This tree is native to wetter areas of Guatemala and southern Mexico, but grows and flowers happily in Melbourne, Sydney and Dunedin! As you'd expect in a flower of this size and robustness, the pollinators are bats and birds, attracted by nectar in the base of the sepal cup. For them the hand is just something to brush against, getting in the way of their feasting. For the flower, it is presumably an attractive bit of advertising as well as good way to dump pollen onto animal visitors.