Rare shepherd's purse coming to a hilltop near you 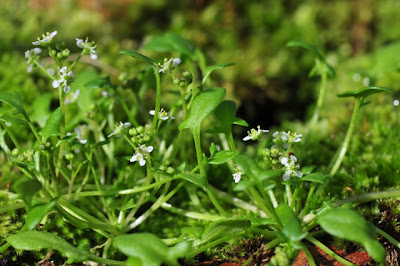 The common Shepherd's Purse, the one you'll find peaking through cracks in roads and paths all over the world, has heart-shaped fruits that resemble old fashioned leather purses. You know, the kind carried by any self respecting sheep herder.

The Southern one has fruits resembling nothing more than the common almond. Nothing fancy, nothing purse-like. Our native species carries the Shepherd's Purse moniker presumably because it was once thought to be in the same genus as the common one, Capsella.

But enough of common things. Ballantinia antipoda, the Southern Shepherd's Purse, grows on a single hill top near where my mother lives. Truly.

That hill top is Mount Alexander, which sounds a little grander than it really is (with apologies to my Castlemaine comrads). Still, Ferdinand Mueller, the first director of the Melbourne's botanic gardens visited Mount Alexander in the mid nineteenth century, discovering what he called Capsella antipoda. 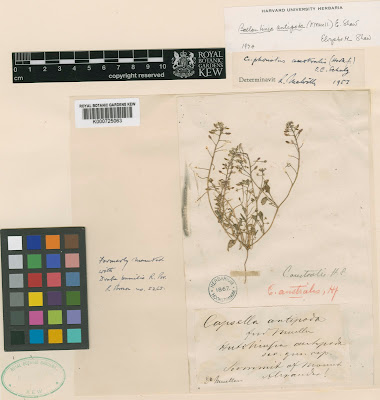 There were more collections in Victoria around that time, from near Carisbrook, Whan, Werribee and Fullagar.

Ninety years later, and ironically after it was thought to be extinct,  the species was plucked from Capsella and placed gently in its very own genus called Ballantinia. Mary Ballantine had, in 1842, collected the one and only specimen of this plant found outside Victoria, on the Macquarie Plains of Tasmania. And here it is, more than 160 years later, in the herbarium of Royal Botanic Gardens, Kew. 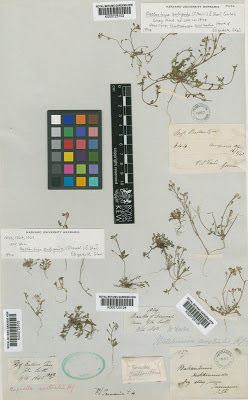 Soon more mothers will live near the Southern Shepherd's Purse. The Department of Environment and Primary Industry are going to propagate seed from the Royal Botanic Gardens' Conservation Seed Bank and try to restore this species in a few of its original habitats in Victoria. That seed was collected from plants on Mount Alexander after its rediscovery in 1983 and grown up in the Royal Botanic Gardens Melbourne nursery for further seed harvesting.

This is important stuff. Although a recent survey of Mount Alexander found 7,000 plants, they are grouped into ten small populations and numbers fluctuate from year to year. A fire at the wrong time or a few too many nibbling animals could easily send this plant to extinction in the wild.

It's a bit hard to explain what makes this plant distinctive. To the untrained (and even lightly trained) eye it looks like any other of the smaller members of the cabbage-family (Brassicaceae). Still if you see a tiny plant with a rosette of hairy, sometimes divided, leaves sending up a flowering stalk with oval-shaped fruits, and you live near my mother, it might just be Ballantinia antipoda.

Note: For more information see the Environment Australia's charmingly titled SPRAT site or one of the Recovery Plans. The images of specimens collected and pressed in the nineteenth century are from the on-line Kew Herbarium Catalogue and the live plant is from the Royal Botanic Gardens Melbourne nursery, taken by Neville Walsh.
Email Post
Reactions:

Lindsay said…
Thanks for the factoid about Mary Ballantine. In exchange (?) I believe that von Mueller did his PhD on the Shepherd's Purse.
So presumably he was not responsible for the "common" name. I wonder what was!
8:34 pm, October 03, 2016

Talking Plants said…
Ah, that rings a bell. Given he named it antipoda I expect the common name, if not uttered by him, certainly references that epithet. Is that what you are implying? All quite interesting! Tim
9:01 pm, October 03, 2016

Talking Plants said…
Ah, that rings a bell. Given he named it antipoda I expect the common name, if not uttered by him, certainly references that epithet. Is that what you are implying? All quite interesting! Tim
9:02 pm, October 03, 2016

Lindsay said…
No, I find it curious that the common name (southern shepherd's purse) seems to compare with a plant (shepherd's purse) quite different on the macro scale, so where did the common name come from? Or was it a back translation from the Capsella name? (I am not a botanist! but I am an orienteer who has learned to be careful where he treads on Mt Alex.)

Talking Plants said…
Ah. I think it's just a rough comparison with the Northern Hemisphere (and now weedy in the Southern Hemisphere) 'true' Shepherd's Purse'. Although the shape of the fruit is quite different it's clearly in the same family and of similar overall form so I think locals would say 'oh, here is a southern version of that Shepherd's Purse thing we knew from the homeland'. That's my assumption. Common names can have obscure origins sometimes. It might just be that a later botanist linked the species name 'antipoda' with its meaning of 'southern' and made the rather vague connection. That's the best I can do! Good question though. Tim

Unknown said…
Hi Tim,
Thanks for the wonderful blog about this amazing plant. Just thought you'd like to know that the Threatened Species Conservancy has taken up the recovery of this species (following the cessation of most threatened species programs in Victoria due to cutbacks). We've just reintroduced this plant to the Victorian pyrenees and are waiting with bated breath to see if our little seeds have germinated. If you'd like to know more you can contact us through our website: www.tsconservancy.org or send us an email at: info@tsconservancy.org.
8:37 am, September 22, 2019

Talking Plants said…
That's great to hear (that work on this species is continuing, not that less is being done for threatened species...). I had heard there was an interest out there on this one... All the best!!
8:57 am, September 22, 2019