Devil's Marble a bitter fruit, or is it? 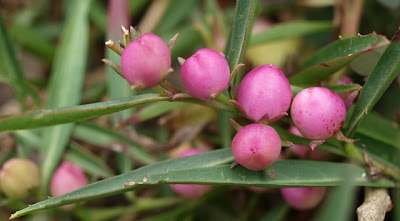 These are Devil's marbles on a Devil's Marbles. The fleshy pink fruits and the shrub that produces them are also called Winter Apple, Amulla or Johnny Apple (not to be confused with Jonathan apple in our local stores).

You wouldn't expect a fruit named after the devil to particularly nice. It's described as slightly bitter or according to Mark Lodder, on the Australian National Botanic Gardens website, simply bitter.

Yet Patricia Gardner (Toowoomba Plants) says the name Johnny Apple is 'probably based on the tastiness of these sweet little fruits'. Patricia offers a reasonable etymology for the common name Devil's Marble: a corruption of the species name debilis which actually means lesser or reduced, referring to the plants prostrate habit. 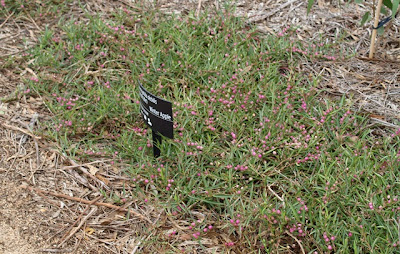 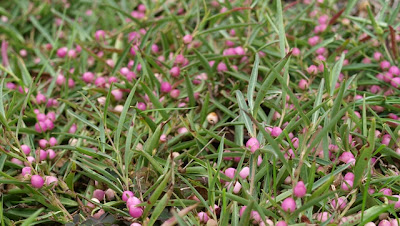 I discovered the fruits on the way up Howson Hill in the Australian Garden at Royal Botanic Gardens Cranbourne. Of course now that I'm home I regret not sampling a fruit and providing you with a definitive answer. Hang on, this plant was growing in a botanic garden so I can't just pick a fruit. Even the Director has to do the right thing so that visitors over winter can enjoy the same spectacle I did on the weekend...

So I don't know what the fruits taste like but I can tell you the plant bearing them is Eremophila debilis, an Emu Bush from near coastal New South Wales and Queensland.

The fruits were apparently eaten by Aboriginal people on the east coast but I haven't found much about how they were prepared or whether they are part of the European bush food pantry.

The Winter Apple was once considered to be part of a related genus called Myoporum. Under that name it was reported as a native plant from New Zealand. The few wild populations in that country are now thought to be deliberate plantings or to have escaped from gardens.

Given its pretty fruits and low stature (good-looking and hardy ground covers are always in demand)  it is set to become even more popular in horticulture on both sides of the Tasman. It doesn't seem to escape from gardens here in Australia but that may depend on how tasty the fruits are. 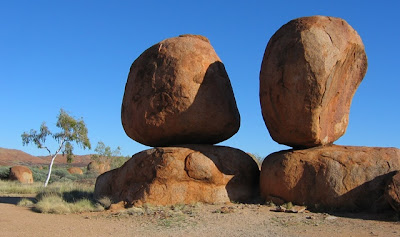 These of course are the real Devil's Marbles.
Email Post
Reactions:

Judi Gray said…
Great article on this beautiful little ground cover plant. We have had it here on the Darling Downs at our patch covered in the fruit for months in a variety of colours from white to a very dark burgundy. I have never tasted the fruit either - possibly I should!
7:27 am, May 05, 2013